Summer Celebration -- The Gift That Keeps On Giving

So, Saturday, I cleared out the tomatoes from the garden and the haul wasn't bad (see above), but it wasn't *anything* like what I'm used to seeing this time of year.  I'd been blaming the crazy overcast May, June, and even minor rain in July, but finally, on this harvest, moving between the plants, even without sufficient weeding, I could tell that something was fundamentally wrong...

Uggghhh... Apparently, our automatic drip system timer died.  Who knows how long ago.  We tested it when we put the plants in, and a few times since, but we haven't really tried it much because it's been so loyally perfect.  Since 2008.  When we bought it.  And now?  It's silent.  The timer can click (which means, open the gates, water should flow) but nothing happens.  After a few minutes of trouble-shooting, I was hopeful that I'd missed something that E could find.  But no.  We came to the same conclusion.  This unit had a good 7 years.  And our garden has not been getting timed water for who knows how long - possibly 8 weeks.  (But don't worry, we still deliver cherry tomatoes to folks when it is important.)

A new timer has been ordered.  Plants that are dried beyond expectation have been watered.  And, for the second year in a row, we went to the Santa Cruz Shakespeare comedy that happened to be playing around my birthday.
Oh, Man.  This production was awesome.  Seriously.  If you think you don't like Shakespeare, as my Shakespeare professor at Cal said -- go to a good production of Much Ado About Nothing -- if you don't like it, you are right -- you just aren't a Shakespeare person.  But I dare you to try to be that person, it is so hilariously enjoyable.


Meanwhile, I have several friends who ran the San Francisco Marathon and the Big Basin 50K and I was proud of each of them.  Also, E2 and I went and cheered in person for Wharf to Wharf, which was interesting, in that we were somewhere between mile 1 and 2 and it was *very* crowded and folks were slowing down due to back-ups.  This race had previously been on my *to-do* list, but now, after seeing the crowds so long after the start, I'm not sure.  I may be happy to just cheer from the sidelines and deliver goodies to my neighbors.

In other news, Summer is awesome.  The garden puts out great stuff.

In my complacency, my weekly mileage was a horrid 15.66 on my feet, including much walking.  For the folks who are wondering, yes, I do plan to do a 5K and a 10K in the fall.  I've been fitting in some random decent tempos and intervals, but really, I suck.  I did add 11 miles of biking and another couple of sets of calisthenics to the mix this week (including 20 minutes this AM -- 3X10 pushups, dips, abs, yoga, etc. -- it's gonna hurt tomorrow).

E and I hosted some new friends for a dinner party tonight.

It's always fun and a little intimidating to host new people.  I got more dressed up than normal (which meant I was dressed down for most women in my situation, but still).  I spent time thinking about and preparing the meal.

In fact, I was quite proud of the menu, even if I did burn the bagel chips to the point of "throw-'em-in-the-compost"

In my excitement to prep for dinner I forgot to set a timer.  By the time I smelled them, the bagel chips tasted like charcoal...

Thank goodness the rest of the meal was wonderful!


Gazpacho (75% from the garden). Grilled okra (huge hit, first time we'd made it), shishitos (grilled, from the garden, huge hit) & eggplant (from the farmer's market, need to work on the marinade recipe). Sliced Cherry garden tomatoes (always a hit, plus we fed Guito as entertainment with one). Smoked salmon, caviar & capers (we're so Californian, we warned them at arrival and offered to grill sausage if they needed more animal protein, so I guess we aren't *that* stereotypically Californian). Goat gouda (double gold Californian gouda competition winner from our local farmer's market, always a huge hit), manchego (who doesn't like Manchego), & d'Affinois (if you like creamy cow cheese, this will keep you happy). Chateauneuf Du Pape (nice guest move!  We were very pleased and honored with what they brought.). Good olive oil, balsamic & fancy salt (all 3 of these are required at every meal in our house). Sliced baguettes (thank goodness I bought that baguette even though I didn't *need* it since I thought we'd still have the bagel chips...)

A few years ago, while training for CIM, I realized I needed to find a local running buddy to train with and, thanks to some Internet stalking, I became running friends with Jen.  Through her blog and her IRL interactions with other local folks in the running community, I made several new running friends.

These running friends are awesome -- they arrange group runs, post-race food and fun, relays, and more.  I have literally never attended any event planned by folks in this group and not had a good time.  Unfortunately, two of them are in the process of saying goodbye to the area before they move far away.

I am very sad at the impending departures.  But, I remind myself that I wouldn't even have these friends if it wasn't for the Internet, so I'm trying to focus on gratitude, not disappointment.

I'm grateful the Internet introduced me to great people, *and* I'm grateful that one of them planned a trip to Alcatraz before she left.  The weather was perfect, and Jen, Jess, E, and I had a wonderful day.


Also, E and I attended the EFF 25th anniversary.  If you care about the intersection of privacy, human rights, and technology then you should be aware of the EFF.  Some refer to it as "the ACLU for the Internet" or "the ACLU for Technology."  Either way, they are a great organization, representing important legal causes, and I was honored to be part of the celebration.

One of the EFF Founders, John Perry Barlow, took the stage and spoke of how proud he was of the EFF, his "4th child."

I'm loosely affiliated with the EFF, professionally, but every time I attend an event (always due to an invitation via the Internet), I see folks in both the legal and technology communities that I respect, and also, I learn something new.  This event was no different.

My weekly mileage total was 33.27, which is not bad at all, for the year.  Thanks to the time in SF, however, I spent much more of these miles walking than normal -- only 15 of the week's miles were actually running.  3 of the runs included quality segments, though -- 3.25 miles including 8 X 1 min hill repeats; 2.5 miles with E at 9:40 pace; and 8 miles this AM with MB, a friend from Seattle who was in town and emailed me (over the Internet) asking if I wanted to keep her company on her last "long" run before the San Francisco Marathon next week.
Posted by Biting Tongue at 14:58 4 comments:
Labels: balance, lawyering, running, tech

I *LOVE* Summer.  The childhood sense of freedom and fun and running and sun and swimming and reading without school to interrupt is a feeling I look forward to each year.

My own sense of Summer isn't tied to the calendar.  Rather, there are several markers I look for and when enough of them have occurred, the weekends feel like I'm on Summer Vacation.

The heat is a big one.  And we haven't had much of that so far this year.

But Saturday, thanks to Jen, I drove out to Richmond for a fun race in the heat.  I'd registered for the 10K, but when I hit the end of the first lap I needed a restroom break.  So, I dropped down to the 5K, finished early, and waited for Jess or Kate (who were doing the 6 hour endurance challenge) to come through so I could accompany them on their next loop.

This meant I got to see Jen finish the 10K.  She ran hard, and I thought she was 3rd woman overall, but I must have missed one, as she ended up 4th.  She did, however, take first in her age group.  Actually, my time wasn't official since I changed races, but according to my Garmin, I ended up 2nd in my age group in the 5K, which was pretty cool.  Plus I got to do the second loop of my non-standard 10K with Jess, and I was next to her when she yelled, "Hey Kate.  26.3 miles!"  Just another day, another marathon, for Jess and Kate.

Back to Summer.  Other things that pique my Summer Sense?

Eating collections of random deliciousness outside and calling it dinner. 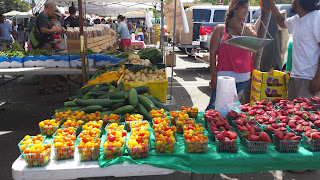 And yes, it's not healthy, but it's true: that first sunburn of the year.  Thanks to the Dirty Dozen running event on Saturday, I have slightly tight skin and my body knows its Summer.

Almost immediately after posting my last blog post, my laptop went on strike.

Emails took forever to send, often requiring me to reboot the machine and open only my email application in order to get them out of the drafts folder and into the sent folder.

The hard drive was spinning at 100% despite essentially nothing being accomplished or run according to the task manager.

I limped along in this frustrating state when I could and my phone when I couldn't until Thursday afternoon, at which point, I decided that the Universe was telling me that I actually *had* to observe the July 4th holiday.

So, I set my out of office, sent some warnings to some folks who might otherwise expect that I would be responsive, and headed up to the mountains, where my cell coverage was so spotty that I couldn't really even check email on my phone.

I had 3 days of nothing but real world direct interactions with humans (other than some texting with my family).

I did the super-hilly-intense in the heat and humidity 3+ mile loop from the cabin every day.  I jumped in the lake.  I read 3 books.  I slept 10 hours a night.  It was glorious.

I was, of course, a bit concerned about returning to the real world.  I couldn't continue in this electronic dark after the holiday weekend, no matter how much I may wish to do so.

So, I ordered a new computer that arrived today.

Interestingly, while my old machine was still broken and slow last night, today it appears to have recovered.

Perhaps the electronic gods just wanted to make sure I got a good vacation (and I did need to buy a new laptop, so that's not upsetting even if the old one isn't truly dead).