There was much celebration in our household tonight! The gourmet garlic finally arrived: 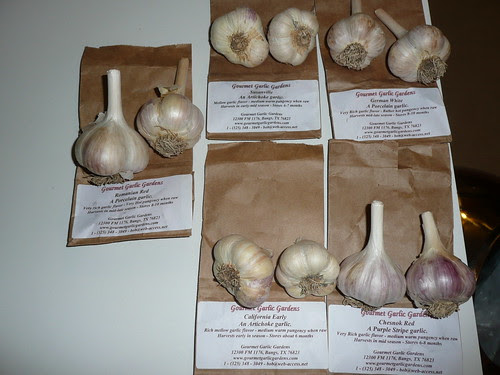 Immediately, we postponed healthy night for a night of tasting and cooking garlic with the appropriate sides (aka beef and wine).

I made baked new york steak from the crazy buy-a-portion-of-a-grass-fed-cow-experiment-that-E-entered on the side of yukon gold potatoes topped with a bordelaise sauce in accordance with some traditional (aka French) recipes. I *never* make French food (too complicated, heavy, and labor-intensive, even though, when I do, it's awesome...), so E was in heaven.

I really should make more French food. Sure, it's heavier, but tonight, we split a 0.8 lb steak, 4 yukon gold potatoes, and a saucepot full of heavy, delicious, buttery (3 Tb), broth-heavy, vegetable filled, flour-thickened and herb-infused wine sauce. After finishing dinner, we are not the *least* bit hungry, and yet, we are not *full* since the food was so rich. Calorically, I suspect it's actually a wash, or possibly even less than what we'd normally put away against what I normally prepare. It's just the volume that is so different.

Anyways, back to the garlic (and, by the way, how much we are both going to smell tomorrow -- JK, how stoked are you that we do not live together anymore?).

In case there was any doubt, E is the best husband 'cause (a) he knew how excited I was about the garlic and IM'd me as soon as it arrived; (b) he indulged me and did a raw tasting of all varietals before dinner; (c) in the course of doing so, he also realized we both would be needing ranitidine long before I would have realized it and brought it to the kitchen before we ate; and (d) after dinner, he engaged in the broiled garlic dessert tasting despite not loving garlic even close to as much as I do.

Anyways, the final verdict, in order of overall ranking:

A TIE FOR FIRST PLACE BETWEEN ROMANIAN RED AND CALIFORNIA EARLY:

We agreed to plant all remaining cloves (we only used one clove for each varietal for tonight's experimentation, you know, we merely consumed 2.5 cloves each in addition to the 1.5 cloves included in the bordelaise sauce...) for all varietals, except, we agreed, that we should really just cook the remainder of the Chesnock Red and avoid the effort of recreating it. It's just too mellow for us. The raw comments included E saying, "this isn't garlic at all." Once cooked, I noted that it was "mild, sticky & starchy," while E said, "It tastes like parsnip." The flavors were interesting, certainly. They just weren't what we were looking for in garlic. If we had infinite garden space, perhaps, but as you know, we only have one raised bed left, and there are additional onions and artichokes to plant as well.
Posted by Biting Tongue at 21:15
Labels: balance, food, garden

I actually like garlic...onions, on the other hand, that's a different story!

How I wish you would have had some of that garlic so we could have roasted it with the cheese-fest we had over the summer! YUM!! =)

Looks great, roasted garlic for me on a Spanish tostada for breakfast every time!