The cold virus that took me out last week was no joke.  I had a physical this week and while I was recovered enough to see the doctor, she noticed my residual symptoms and asked, "Oh dear -- did you get that terrible virus that's going around where it starts with a super sore throat and you can barely swallow, then the mucus builds like crazy and you lose your voice?"  Um, yes.  I did.  Apparently, my 7 days of serious symptoms followed by 7 days of minor symptoms are on the light side of what this virus has done to her practice -- take care of yourselves, friends!

Given the residual infection, I tried to reign in my running efforts in hopes of an aggressive taper, improving health, and eventually being able to race my last target race of the year.

Unfortunately, the weather did not cooperate.  The morning of the race, I still had a stuffy nose and mild sinus pressure and it was scheduled to be pouring down rain during the race.  I went back and forth on what to do (should I be smart?  I did cough quite a bit after waking up... but then the coughs stopped.  Am I wimping out?  I am more fit than I've been in ages and I think I can definitely set a decade PR, even with the rain... and on, and on).

Finally, I decided not to do a hard effort in the cold rain while still recovering from the worst virus I'd had in at least 3-4 years, mainly for the sake of my brother and mother's husband, both of whom are severely immunocompromised.  I was really looking forward to Christmas with the family, and the reality is, if I relapsed to how sick I had been, I would have to avoid the big family gatherings altogether.

So, Sunday, instead of racing, I hung out inside and worked on a new jigsaw puzzle with my visiting cousin.  Monday, I spent 2 hours gardening, mainly removing all of the remaining tomato plants that finally died, but also raking leaves and being shocked at how winded I got from it, although, in fairness, raking is a full body workout that recruits many muscles I don't usually use for aerobic work.

Tuesday, I finally headed out for an easy jog, running *very easy* to and from the pharmacy to pick up a prescription.  My Rx wasn't ready, so I took the 10 minutes they needed to prepare it to jog around behind the store and do some unplanned 8X15s strides with jogging recovery.  Woot!  First "workout" in a couple of weeks, with some actual speed work, even if *very* light. 2.5 miles + 1 hour gardening (still removing the plants).

When I couldn't do the 5K last weekend, I had to reset. My original end of year goals were:

1. At least 1 lesson of Spanish study every day between December 1 and the end of the year to prepare for our New Year's trip to CDMX.

I'd been doing well enough on the first goal that I'd started to have some Spanish dream snippits, so that was good.  But the 5K... After the failure on Sunday in San Jose, I knew I'd have to let this one go.  And, realistically speaking on the Cooper Test... I wasn't there yet.  I wanted to be.  Certainly.  But I just was not close enough to that fit.

A goal that seemed super doable, however, was a sub 9 minute mile.  I hadn't had one of those on my log in well over 2.5 years.

Posted by Biting Tongue at 23:34 No comments:
Labels: running

In connection with last weekend's CIM fun I spent some quality time with 5 children (3 nieces and nephews and 2 god-children).  You know, single-digit-aged-humans, otherwise known as virus probes?


Yeah, although I enjoyed my train ride back, it was clear that I'd came down with a nasty cold by Sunday night, and it just kept escalating.

I took Monday off from running, but headed out Tuesday in hopes of an easy run, despite the sniffles.  After 1.35 miles @ 10:56, it was very clear to me that I was not in good shape.  Less than 1.5 miles at just under 11 minutes per mile should not have been that hard.  I acknowledged that I was sick and cut myself infinite slack -- jog/walking my way home through the rest of the scheduled 4+ miler, finishing the last 3.02 miles at an average pace of 15:43.  And then I went to bed super early.

And then, for the next 3 days, I didn't even think about running due to a sore throat, headaches, sinus pressure, ears that couldn't clear and more.


Man, I hate being sick.

Did I mention that the original plan had been to run the Crissy Field Parkrun and try to get a decade PR?  I'd put in some decent weeks of prep, and last week, I'd run an 85% effort Cooper test at 9:16/mile for 12 minutes as an easy workout before CIM, which made me think I could shoot for a 5K at 9:20ish pace and set yet another 40s PR.


Yeah.  That totally didn't happen.  I couldn't really swallow for half the week without wincing.  I was coughing up gross stuff.


The friend I'd invited to join me at the Parkrun was wonderfully understanding when I explained the situation.  E, unfortunately came down with the virus on Friday (it had looked like he was successfully avoiding it until then), so he bailed completely on Parkrun, and I opted for a 10 AM meetup with lightly jogging and some walk breaks for 3.8 miles @ 16:18 average pace (the jogging was in the 12ish/mile range, but every hint of hill plus some feelings of exhaustion towards the end resulted in walking).

Last night, we went to an annual holiday party in SF and suffered the abuse of calling it *early* at 11:30 PM (my completely gravely voice was helpful here, as I claimed sickness as part of the reason we needed to leave before the white elephant exchange was over).

Apparently, I'm not quite 100% yet. But, I'm no longer in pain from the virus.  I can breathe through both nostrils (which is more than I can say for when I hoofed it over Taylor street from Fisherman's Wharf to Sutter Street).

I now have minimal coughing.  And I'm excited for the last fast 5K of my fall buildup.

Keep your fingers crossed that I don't get another virus, please!  I'd very much like to cap off the fall of my minor (but valid) increases in fitness with a 5K decade PR. 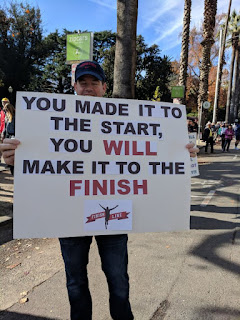 These days, I'm more of a relay marathoner, and I love that CIM offers one.  Last year's first leg of the relay was my longest race effort run of 2017, and I had a great time running with friends.

This year, I was scheduled to run the relay with my sis & bestie, D.  It was a classic perfect CIM day: start in the high 30s, finish in the high 40s, clear and calm and beautiful. 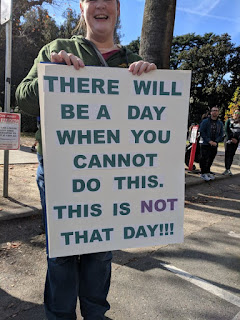 Sis is fast.  She ran the first two legs and got to the 13.5ish mile relay handoff at about an 8 minute/mile pace.  Then it was my turn.

I spent the next 7 miles running as hard as I comfortably could, watching the various pace groups swallow me up every mile or so.  First it was the 3:40 group.  Then 3:45.  Then 3:50.  3:55.  Finally, about a mile before I finished, the 4 hour pace group arrived.  I tried to go with them, but given that I didn't have a 9:09 mile in me at the start, it wasn't surprising that I didn't have one in me at the end either. 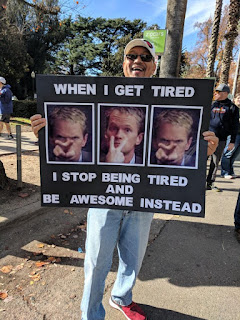 After a little bit of chaos, I handed off the relay chip to D, who picked up the pace and ran to the finish.  Then we ate delicious Mexican food and I took the train home.  A beautiful day, time with people I love, and a good run?  There's a reason I keep coming back to this race.

A) average sub 10 minutes/mile -- I wasn't sure if I was in good enough shape yet to hit this one, but I felt close enough that I wanted to give it a try. 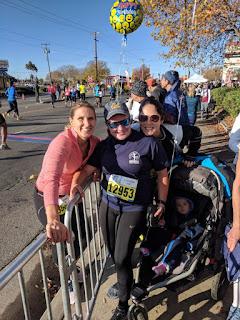 Overall, I'm very pleased with how I ran and the race itself.  I definitely didn't push myself to the edge of my fitness, but I hit my best sustained pace for 7 miles in a few years, which felt great.

Plus, now that I've got the half marathon and the 7 mile race out of the way, I can enjoy the two 5Ks that are coming up.  As I noted earlier -- the 5K is absolutely my favorite race distance right now and I'm excited to see if I can improve on my decade PR in both of them.
Posted by Biting Tongue at 16:17 2 comments:
Labels: family, running, travel
Newer Posts Older Posts Home
Subscribe to: Posts (Atom)