So first, let me preface this by saying that the race, overall, was super fun, and great, and the GOOD post is yet to come.  I'm glad I did it.  It was *not* bad.

But, there were many bad things.  Many of which were my fault.

The weather was not my fault.  But it was pretty bad and definitely at the root of many of the other bad things.

My attire choices were bad.  First, I didn't go buy a cheap poncho to deal with the weather.  I bought gloves with cut off fingers, which is hilarious, because while they were the greatest thing ever, and I was super happy to have them 'til some random house in the fabulous 40s, apparently, I didn't need to attend to this detail at all.  At the expo. the race gave us gloves when we picked up our gear (I got two pairs!!).  So I covered the issue they covered, but what I didn't do is buy a cheap poncho.  Instead, I spent about 3 hours regretting this during the race.  Everywhere I looked, there were people in nice, light, easy to move water repellant ponchos.  With hoods!  Those Jerks With Their Awesome Rain Gear!  But not me!  I opted for the *heavy* duty trash bag.  Key word?  "Heavy." 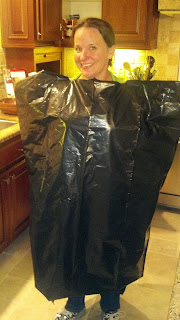 The first 3 miles, this seemed like a brilliant choice.  When a tail-wind came, I'd spread my wings and fly!  Cross-winds and head-winds, on the other-hand? Not fun in my heavy-duty sail, but at least I was relatively dry.  I wasn't yet tired, so it hadn't occurred to me that the folks in the cellophane looking things were equally dry, but much less strained by their gear.

Oh, did I mention that I didn't have time to take off my throw-away sweat-pants before the start?  After the 4:25 pace group took mile 2 at sub 9:30, I decided to stop and remove them.  Garmin says this took about 40 seconds because I had to remove them over my shoes.  They had tight ankle elastic.  Yet another bad attire choice.

Anyways, back to the heavy duty trash bag dress of awesomeness.  As time went on, the bottom of my "dress" kept clipping my calves, and eventually, I tore both the front and back into strips I could knot to make it shorter and more tight fitting.  These knots limited my running stride and collected water that I had to carry.  In short, the heavy duty trashbag is sub-optimal.  Go for the super-cheap dollar store light poncho.  Note, due to the weather, the protection was important enough that even in its sub-optimal state, that I kept it on 'til mile 8 or so.

The Chafing was also bad.  Part of this ties back to the bad attire issue.  Unbeknownst to me, I should have worn shorts.  I didn't.  The pain started about 1/3-race and continued to the end and through the rest of the day, as open sores in a long car ride trying to heal against the dry clothing you change into post-race will result in a particularly non-fun exit from the car after a couple of hours of inactivity.  Today, I am covered in bright red scabs.  Super sexy!

The in-race porta-potty situation was bad, too.  The pre-race porta-potty situation at CIM is legendary: they pride themselves in their abundance.  I, unfortunately, did not take the time to wake early enough to eat and have my coffee and show up in enough time use the abundance.  Instead, I slept in as much as possible after a night of non-optimal race food, had my coffee and bars and hopped out of the drop-off car at the last possible moment to ran to the start whereupon I arrived at the 4:25 pace flag about 1 minute before the gun.  I've never actually started a marathon with a full GI tract post dinner of too much Mexican food and alcohol followed by breakfast and coffee with no useful GI bathroom break.  I think I'd like to never repeat this experience.

The AM late arrival displays a common theme.  My commitment was bad.  I realized mid-week that I wasn't coming close to my already-revised time goal due to weather, and I kind of just started to phone it in race-wise.  I committed to social obligations and didn't pay attention to food or attire (hence the majority of this post).  The night before the race I hung out with 2 couples we hadn't seen in a long time and in doing so, I had 1.5 glasses of wine, a beer, lots of water and tamales and tacos instead of my usual pre-race no alcohol noodle soup routine.  My original plan had been to show up with my own soup at our hosts.  Right.  That plan was derailed without much dissent from me, and there you go.  I ate and drank what was served.

My lack of dietary and early wake-up coffee commitment meant that I needed a porta-potty on-course, pretty much immediately after the start.  I felt great, otherwise, and given the long lines at the first few, I pressed on with the 4:25 pace group, even as they sped up to paces that didn't seem to make any sense (the last mile before I bailed, they were sub 9:30 and I bailed on an uphill portion).  The thing is, I was not alone in my late arrival to the start.  I left my driver with 0.3 miles to go to the turn around and there were a mile of cars behind us.  I ran through the storming rain and wind to the 4:25 pace group and barely made it before the start.  Most of the driven runners were waiting in the non-stormy comfort of their drivers' cars 'til the last minute (like me, but even moreso).  Also, after the start it became clear that at least one large shuttle arrived after the start, so that as we headed out, we were running *against* runners who were running to get to the start and cross the mats.

I repeat: The in-race porta-potty situation was bad.  This was not the race organizers fault (except, perhaps for the late shuttle, but really, what are they going to do, leave the late shuttle folks stranded?).  Due to weather and a desire to limit time getting drenched at the start, many runners (myself included) started without the appropriate pre-race bathroom time.  I skipped the first few porta potty stations because the lines were just too long.  But at mile 3.5, I couldn't wait for another option.  So I stopped.  And as I waited for an open option, I stared at 2 port-o-lets pushed door-down to the ground by the wind, clearly understanding that my situation was not dire -- I was not in them when it happened.  And yet, despite my instantaneous committed gratefulness practice, it continued to rain and the wind continued to blow.

4 minutes and 36 seconds later, I got back on the course.  Cold.  Stiff. And with a group of folks who race much slower than I am used to.  But I was wearing an extra large trash bag and it was storming and really who knows what is the appropriate speed under these conditions?  Also, it felt pretty comfortable to run at the pace they were running.  Possibly because my trash bag dress was tied to restrict my stride.  But either way, I was enjoying running at roughly my long run training pace and laughing at the hilarity of the weather and the miles to come.  Who was I to complain?  As I said, when it comes to racing this race, My commitment was bad.

But it was still a great day.
Posted by Biting Tongue at 21:51
Labels: balance, running