A long time ago (a decade ago, in fact), E and I moved down the peninsula and told ourselves that we'd take a hotel room when we were missing out on stuff in San Francisco. That was how we justified the loss of a true culturally diverse city in exchange for our plot with a garden and good, sunny weather, and a shorter commute.

We haven't taken ourselves up on our promise to return and stay in hotels as much as we should have. But we've done it more than most. In fact, we do it at least once a year thanks to my first post-college-employer, who invites us to their holiday party every year.

This year, we crammed as much as possible into the weekend. I started with Friday business meetings and lunch with a law school friend at Claudine followed by tea with another lawyer at the Ferry Building and late afternoon work at Ritual. We swung by Aldea Niños to buy a baby gift on our way to our friends before they drove us to dinner at A47 (in an unplanned coincidence, each of us had driven the route in France within the last 6 months, which was pretty cool -- the map on the menu made sense to all of us and we discussed our favorite stops).

So, really, could I have a more stereotypical SF Friday?

Why, no. And how grand was that?

Which, for some reason, I also did this weekend. As a passenger. Damn, that's cool... 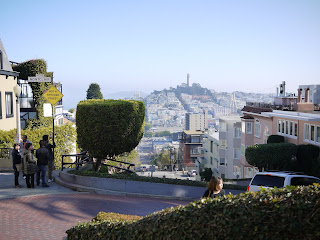 We stayed at the Embarcadero and enjoyed views of the holiday ice skaters (the majority were ice wobblers, actually), Christmas lights, and holiday shoppers. 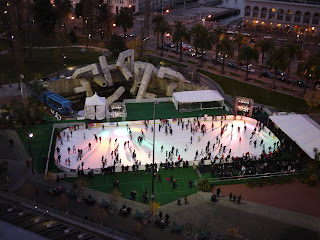 We attended the holiday party at Alexander's Steakhouse and we had brunch twice with friends, once at Kingdom of Dumpling (how can you argue with that name?) and once at Just For You Cafe.

Overall, it was a whirlwind of social activities with some work squeezed in between. But the weather was perfect, the views were amazing, and we were reminded, once again, why San Francisco really is one of the greatest cities. 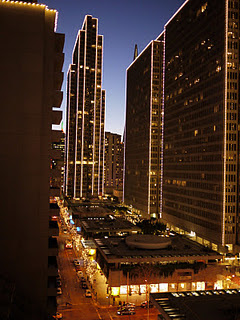 Lawyers in Cleveland TN said...
This comment has been removed by the author.
6:49 AM