Prisoners of Geography: 10 Maps That Explain Everything About the World 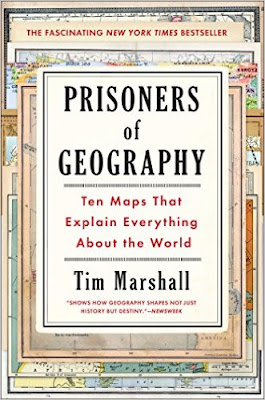 I had so many goals for the sabbatical.  And I knew I would in no way come close to even accomplishing most of them.

But, frankly, this is how I roll when I'm at my best.  I dream big and too much.  Then, I try to make space for everything I'd like to have happen in my life, even though I know it is impossible.  Instead of lamenting all of the failures that are inevitable, I try to keep an open mind and recognize situations where it makes sense to focus and apply effort because life and luck have put me in a situation where hard work is highly likely to pay big results towards one of my goals.  Essentially, I am the opposite of focused until I decide that it's time to be committed.

This is a very long-winded way of saying that some of the many things I was hoping for myself out of this sabbatical were to become more educated with respect to geography, history, anthropology, literature, and language.  Literature, has been quite the struggle, thus far.  But, thanks to travel forcing it on me, I have happily increased my knowledge with respect to geography, history, anthropology, and language, primarily just as a result of going places and interacting with the people there.

I picked up this book at my local hometown bookseller on a walk while waiting for takeout to bring to the friends who were hosting us.  It was the first non-travel physical book I'd read in ages, which no doubt helped contribute to its enjoyment by me (I love the kindle, but I miss real books!).

More importantly, this book informed me on geography, historical military conflicts (and how geography affects them), and all sorts of stuff that I think classically educated people (or war history nerds like my husband) already know.

But I didn't know much of what this book explained.  Russia's population is only 144 Million(ish)?  There are all sorts of disputed land claims in the Arctic?  The current peace in Europe (during my lifetime) is actually the longest period of peace they've had in ages?  The population of Tibet is now 90% Han Chinese?  Argentina was a top 10 economy in the beginning of the 1900s?

So, yeah, this book was a big hit for me (Maps and Data! What's not to like?).  First, it was well-written, with great maps, and easy to process (at the risk of admitting that perhaps it simplified things too much, but if your choice is over-simplification or nothing, you may want to opt to start with simplification).

I feel much closer to my goal of a geographical education during the sabbatical than I did before I read this book. If you are not a hyper-war-history-nerd who is likely to already know the basics of the regional geography and history of each of the chapters, I think you would find this book very well-written, enlightening, well-laid out, and interesting.
Posted by Biting Tongue at 22:55
Labels: books, sabbatical, travel

Hmmm, this sounds right up my alley.

Angela -- yes, I think this would be up your alley in that it's a very data centric view on history. I'm right with you on the over-simplification -- nothing like being an ignorant foreigner to get you comfortable with the idea that some knowledge of what's going on, even at 65% accuracy (e.g. often my Spanish comprehension level), is much better than none.