Some Thoughts On the DOMA Arguments (Now With Curse Words)

So, I'm back with day 2 of SCOTUS marriage law comments. I was just going to take a break to read the DOMA arguments and be quiet, but I laughed at an early passage in the transcript and had to share:


JUSTICE SCALIA: Really, that's very peculiar. When -- when both parties to the case agree on what the law is? What, the -- just for fun, the district judge is -- is going to have a hearing?

Why did I laugh?  Because I pictured Scalia stopping himself from saying, "What the Fuck?"  I'm pretty sure that's what he was thinking.

It was pretty dry from there, so I made it halfway through the transcript before I hit this bit, and my jaw dropped:

Guess what, kids?  That is actually what happened.  This is the justification in the House Report for DOMA.  In nineteen fucking ninety-six.

Sometimes I forget that I live in California, and the Bay Area, at that.  But when I read this statement, I was reminded that I was in Berkeley at that time.  Clearly, my daily experience was not remotely in line with the majority of the population the House thought they were representing. At the time, I assumed the proponents of DOMA would not have been so open with their judgment and rather would have tried to rely upon "the traditional institution of marriage" as a "bedrock" of our society that needs to be "preserved".

In other news, it almost makes my brain explode to read this statement in today's culture of awareness of bullying.  I can't imagine what was considered acceptable bullying of homosexuals at that time if this type of language was considered completely reasonable justification for passing a law.

Intellectually, the best part was the awesome moment when Justice Kennedy creates the most unlikely bedfellows:

JUSTICE KENNEDY: Well, I think -- I think it is a DOMA problem. The question is whether or not the Federal government, under our federalism scheme, has the authority to regulate marriage.

Bam.  See that?  That's the moment when the traditional 10th Amendment States' Rights advocates ("Federalists") just got lumped in with the same sex marriage crew.

Where are all the States' Righters, you ask? (You must not be from the South). 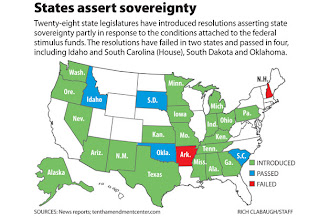 Hmmm... and what's the current status on state laws for same sex marriage:

Looks like Iowa and Washington are the only states where that party would be any fun.


Just when I thought I couldn't be surprised any more, right before the end of the transcript, I came upon this exchange.

CHIEF JUSTICE ROBERTS: As far as I can tell, political figures are falling over themselves to endorse your side of the case.

MS. KAPLAN: The fact of the matter is, Mr. Chief Justice, is that no other group in recent history has been subjected to popular referenda to take away rights that have already been given or exclude those rights, the way gay people have. And only two of those referenda have ever lost. One was in Arizona; it then passed a couple years later. One was in Minnesota where they already have a statute on the books that prohibits marriages between gay people.

So I don't think -- and until 1990 gay people were not allowed to enter this country. So I don't think that the political power of gay people today could possibly be seen within that framework, and certainly is analogous -- I think gay people are far weaker than the women were at the time of Frontiero.

Like yesterday, Wow.
Posted by Biting Tongue at 13:44
Labels: lawyering