It was a gloriously beautiful day in one of the most beautiful cities in the world.  As we turned the corner to view the crashing waves of Baker Beach, a woman with a strong Russian accent asked me, "Vat is dat?"

And, she was right.  I do recall this portion being socked in fog the last and only time I ran it.  And it was BEAUTIFUL today!

So, I did not meet my "A" (aka "dreamer") goal of 2 hours, but I'm not disappointed.  It was one of those amazingly gorgeous SF days where it's completely obvious why it's such a major tourist destination.

I didn't really know what would happen today.  I felt like my running could be magical (like the weather), and originally, it felt like it just might be.  But I also felt like there was a non-trivial chance my hip flexor could freak out and I'd have to drop out.  It wasn't until Mile 11.5 when I finally realized I was in the clear and could just finish without fear.

Thanks to the taper and ramen and Onigiri from the Japan town mall for late night snack and breakfast, I went out feeling strong and had a great first couple miles.  I stuck with F, as planned.  Originally, we started behind 'em, so F and I tried to catch and pass the 4h marathon pace group before the hill in Fort Mason to avoid the crowds.  Once we got close, it turned out, they were going too fast for me, so when we hit the hill at Fort Mason, I let Fio go.  She stayed with them, more or less for the entire race, and crushed it with a 3:57 for her first marathon.  Not too shabby for anyone, but in particular anyone on the hilly SF course, and a newbie who ran her first race ever (a 10K) in February of this year!  I'm so proud and happy for her!

Even with the ease-off for the Fort Mason hill, I still hit mile 5 more or less on pace for the 2 hour goal.

But, as you can see, when we hit the uphill to head up to the base of the bridge, and I slowed to a crawl.  Then I walked.  If you look at the elevation profile, you can see why mile 5 may have been a doozy for me: 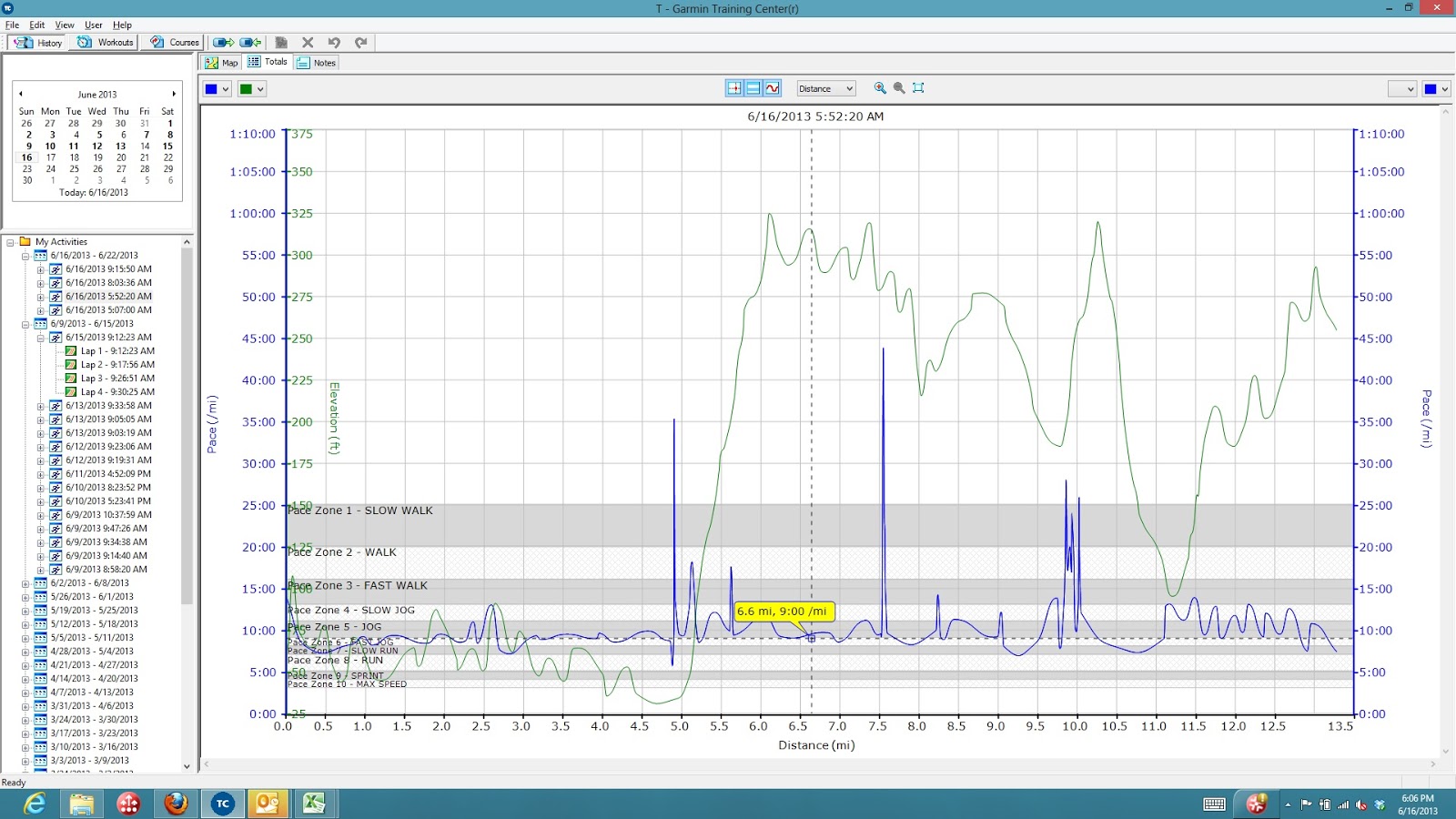 Once the 2 Hour goal was gone, I just tried to be smart.  The rest of the race was all about just trying to keep my head in the game enough to do a job I was proud of.  I did my best to save energy early on with walk breaks, to take advantage of the downhills (my strength), and to push myself to run the last 3 miles to the best of my ability without stopping to walk (except I may have grabbed some electrolytes or water).  At around mile 10 or so, I set a sub 10:00/mile pace as my goal (which, conveniently, was 15 seconds per mile faster than my "I think I should be able to do this no matter what" goal of 10:15s/mile).

As appears to be the norm for me lately, some crazy lady tried to race past me in the finishing shoot, so I sped up until I dropped her...  (Dudes don't seem to do this to me?  What is with the mid-pack ladies?)

In short, I was in approximately the shape I thought, but this course is much more difficult than I gave it credit for.  I'd only done it once before, as the first half of the SFM, when I did the full with E2.  Then, we did it in 2:19:55 and finished the full well before E2's 5 hour goal in a clean 4:38:26 (my one and only negative split, actually -- funny, before looking at the data, I didn't know I'd ever run a negative split marathon).  I think the reality of the difficulty of the marathon distance obscured the reality of the difficulty of this course.  Today, I realized that the SF First Half Marathon  course makes the US Half look like a cakewalk.

I'm still evaluating my options, but today makes me think I'm actually in pretty darn good shape, and a return to the Rock 'n Roll SJ this year would be a great place to try to push the 2 hour mark.  I know I've got it in me, but if there's one thing I've learned in 2013, it's that I'm not great at hills while I'm living and training at sea level on the SF bay.  So perhaps the flat (but turning) SJ is the way to go...

Great race, T! Had a fabulous race experience with you! Would do it again - after lots of recovery time!! Also, thanks for the props. Man, do you love your data or what! Impressive! You definitely know what's going on with your running! Here's to many more races in our future! CHEERS!

Congrats to you finishing your 36th (!!) half marathon, and to F for absolutely crushing her first full! I think SJ RnR would be a great course to push yourself on... and in retrospect, Healdsburg was also a great PR course. It's not crowded and I only ran 0.04 miles longer than 13.1. However, there are small rollers, and one sizable hill, so I guess it's out of your consideration.

Sorry I didn't get to see you today! The shuttle dropped me off near the 1st half finish (not sure it was supposed to do that), and I actually thought 2 seconds about waiting for you to finish, but I would've had to hustle over to my start. Next time!?

Thanks F and J.

J -- I can handle rollers, but the sizeable hills seem to *really* slow me down these days. When I was living in Seattle, I trained in hills every day and developed great hill strength. I did Coeur D'alene after living there and didn't really seem to struggle much at all. But here, once every other week just doesn't seem to be enough to do it. I could try to do more, no doubt, and I may do that. Just giving it some thought.

As for next time, for sure. We should pick a race we can both meet up and do sometime this summer or fall. I miss running with you!

And... I'm not sure whether I've talked this up to death with you yet, but have you considered the Avenue of the Giants? Most beautiful marathon ever! And it's got the small-town good vibes, like our Equinox, and right afterwards, you get to cool off in the Eel River!