I've been super lazy on the workout front ever since I bailed on the San Jose Rock 'n Roll Half.

How Lazy?  Well, let's just say I did Bikram the day after, and then didn't do a single workout until arriving in Amsterdam the AM of 10/12, whereupon I commenced my standard travel cross-training regimen of personal physical transit coupled with all the good local beer, wine, and food that my belly can handle.

Amsterdam is a beautiful city full of canals and bikes.  (Also, it is a direct flight from SFO and a good, fun weekend layover city if you're headed to Barcelona). 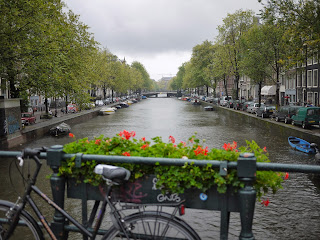 It's such a bike-friendly city that our hotel had bikes for free use.  We took full advantage and it was awesome.  I did much walking, biking, and sight-seeing, but no running in Amsterdam.  So, despite several miles of non-running self-propelled transport, and some bikram, I completed my first run-free week in quite some time.  (Also, I was ridiculously relaxed.  I'm hoping these two facts are unrelated.)

Love your pics! Looks like you had a fabulous trip!

Enjoy your no-run vacation!! It's good to take a break every once in a while - like a hard reset.

@Arvay -- Seriously. I was perplexed and simultaneously pleased to see this juxtaposition. It was on an alley of nothing but high-end fashion brand boutiques...

I heard that Carhartts are gang clothes on the East Coast somewhere (Philadelphia? Boston?). If they are high fashion in Amsterdam, then this is a third incarnation

@Arvay -- Huh. I suppose on the gang clothes angle, the think material and functional construction makes sense. Good in a knife fight, I'd guess.