So, E & I just completed a week-long trip to Japan.  We had a wonderful vacation in Japan back in 2008, visiting Tokyo, Kyoto, Nagano and Okinawa. This trip, in contrast, was for business, and it was all Tokyo.

On the flight over, I listened to about 4 hours of language lessons (shout-out to http://www.japanesepod101.com/) and was pleased to realize that my brain had actually kept a bit of the Japanese language study I'd done before our last trip somewhere deep in the recesses.  It was quite fun, actually.  For every lesson I did, I recalled another 4-5 words, phrases, or concepts from my memory that I thought I'd completely forgotten.  Bonus.


Even so, my command of the audio and spoken language was nowhere near what it was last time (and it's not like my Japanese was very good then, either).  But, in a surprising (to me) development, my Chinese studies actually paid off quite a bit.  I could read the few characters I recognized and know what basic things meant, even if I couldn't say them or understand what was being said.  Also, I can memorize what a character looks like thanks to my Chinese studies, which was helpful when trying to identify restaurants, etc.  I think it was actually easier to get around this time than last time, even though my spoken language skills were much worse.  Reading is important kids!

We arrived at almost midnight and caught the very last train to Shinagawa from Haneda.  Nothing lets you know it's time to get out quite like the meticulous shutting down the train station ritual of ten or so uniformed and white gloved Japanese guards.  From there, we managed to get a taxi to understand where our hotel was and he dropped us off in front of a completely closed building.

Yay for international adventures!  We were officially in the land of the weird.


Eventually, we found our way through a mall and some banquet rooms to the lobby and an early morning sleep.  Wednesday we both worked, although we did manage to hit a sushi bar in the hotel for lunch.  E splurged on a more expensive set meal than I did and for his troubles he was rewarded with both uni and a live shrimp that waved its little legs around immediately prior to being butchered and placed on his nigiri rice -- that was a bit more graphic than we were expecting, but when in Rome...

For the first dinner, since the negotiations were done and the deal was closed, we met up with some of E's Japanese business partners and they treated us to a delicious 9 or 10 course meal.  Oh man.  I love me some Japanese food.  So many delicate, delicious, fabulous treats.  The partners were very impressed with our appetites for Japanese food and chopstick skills, and surprised at our explanation that in the bay area, it's considered standard to have good chopstick skills, regardless of whether you are Asian.


Thursday, E had press meetings and I had calls and work.  I woke at 4 AM and couldn't sleep any later, so, trying my best to be quiet and directing my laptop screen away from the bed, I was able to work 6 hours straight before 10 AM -- such a luxury.  From there, I hit the gym, which required me to walk through the mall (of course) in my workout clothes.  Given the looks I received, I'm fairly certain I was committing some sort of serious social faux pas.  Oh, well.  I'm a gaijin.  Not my fault...

Since I managed to close out all of my immediate work needs, I decided to treat myself to some culture and walked to two nearby shrines for my lunch break.  We were staying in Akasaka, which is primarily a business district, so I ended up walking amongst the salarymen and salarywomen and watching them delve into their phones in the calm of the shrines.  In both shrines, I was the only non-asian person and one of the few people who were actually taking in the sites.  Most of the people seemed to be simply seeking a peaceful break from the density and chaos.

These shrines were both designated shinto shrines (apparently at least one was originally a Buddhist shrine but its story was modified to avoid destruction at some point), and each had its own designated animal (fox and monkey). 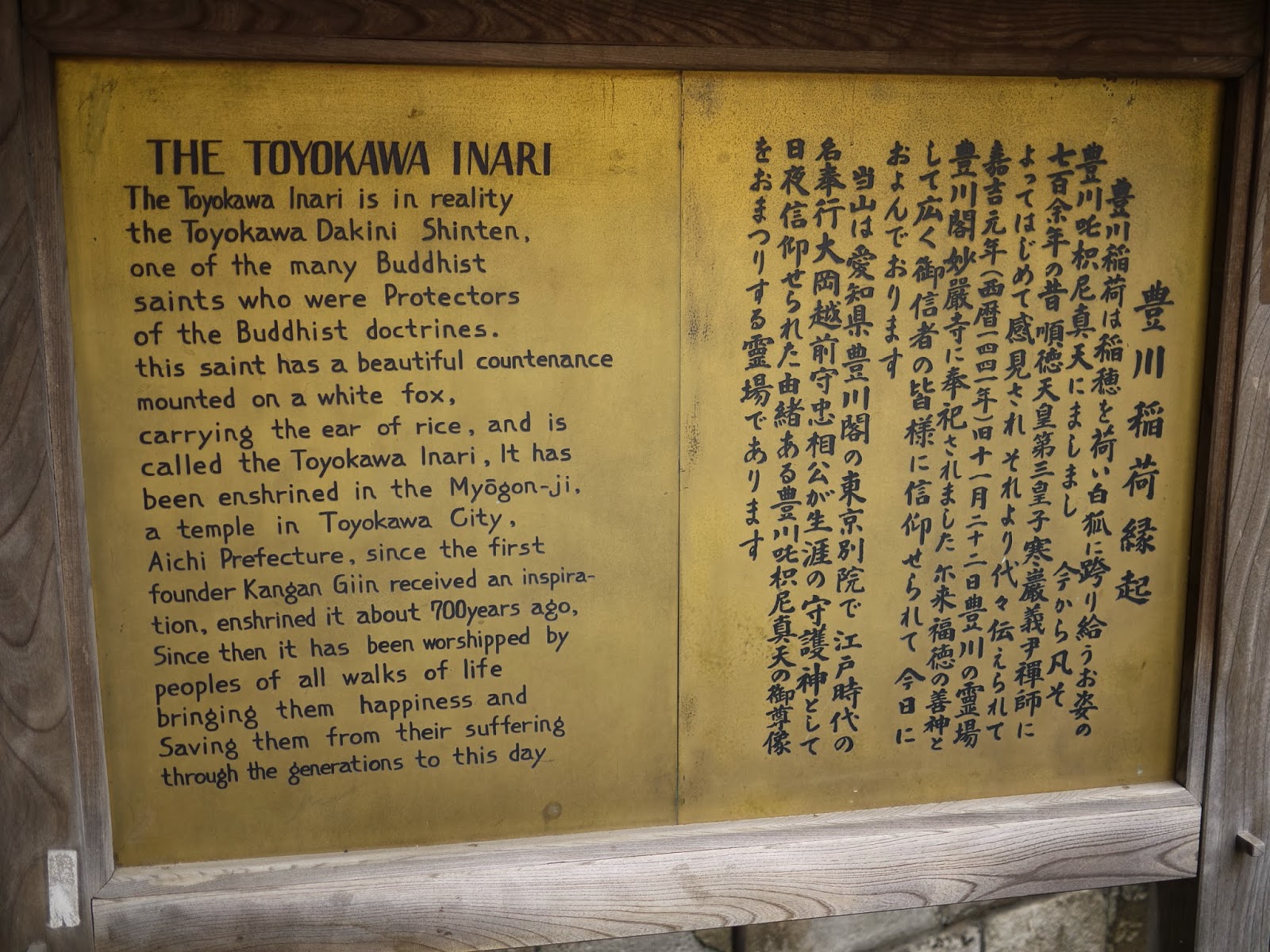 On Friday, we woke to snow.  Actually, I woke at 6 AM and worked 'til 9 without looking outside, but when I did, I was amazed at the view.  It hadn't snowed in Tokyo in 14 years before the week prior, and now it had snowed twice in one week.  We were a bit concerned about the logistics of moving to our weekend hotel, as we'd heard horror stories of the city's inability to handle the snow, but we managed to get to our new hotel in Roppongi unscathed. 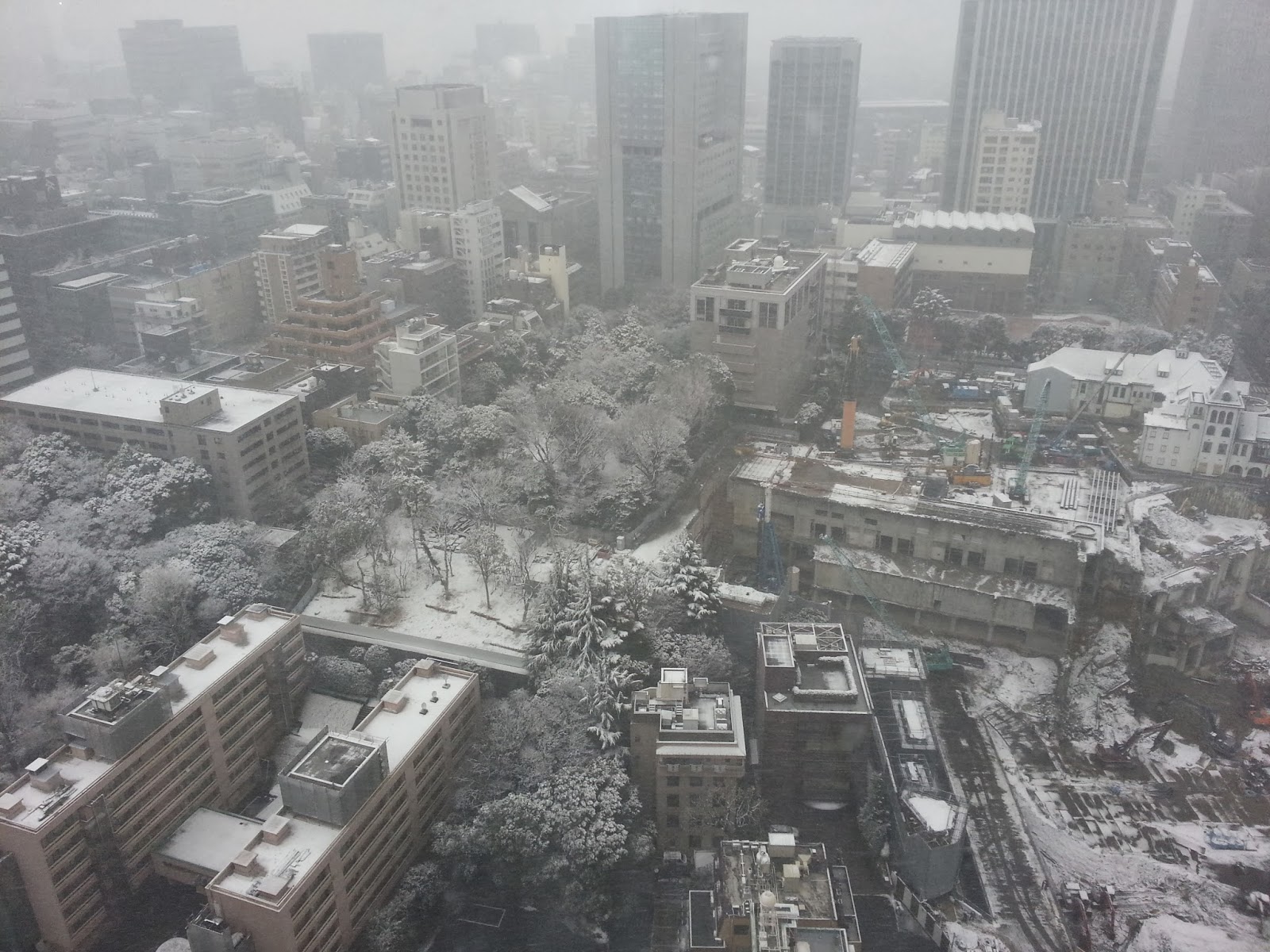 For Valentines' day dinner, we splurged on teppanyaki at the Ritz Carlton.  E opted for the Japanese beef and I had spiny lobster.  For dessert, we sat at the window and watched the snow fall.  The hotel is on the 45th floor and supposedly has great views, but due to the snow, we really could only see for a quarter of a mile or so.  Even so, it was a wonderful way to celebrate.

Saturday, I woke, worked from 6-8:30 or so (it was Friday evening back home), and then headed to the gym at our new hotel, which was to die for.  I spent 2.5 hours working out, stretching (pigeon pose!), doing core and arm strength work, showering, getting in the hot tub, the cold plunge, and preparing for the day.  Such a luxury!

For our Saturday tourist activities, we enjoyed xiaolongbao at Nanxiang Dumplings, took in the Andy Warhol exhibit at the Mori art museum (and enjoyed a drink afterwards, as the 53rd floor view of Tokyo from the Mori Tower was wonderful now that it had stopped snowing), walked around Akasaka in the snow a bit, had an early dinner of ramen (complete with automated order ticket machine confusion), snacks of rice triangles and beer, and I was in bed by 7:20 PM.

After the super early bedtime, I was worried that I would wake up too early and would be stuck trying to be quiet and not making light pollution, but I slept a blissful 11 hours and 25 minutes 'til 6:45.  Glorious.  I headed to the mall attached to our hotel and worked from the Starbucks for an hour and a half -- amazing how working on a Sunday AM doesn't bother me at all when I've had a supreme sleep beforehand.  From there, I headed back to the amazing spa and gym and repeated the 2.5 hour routine from the day before.  I can only imagine how fit (and relaxed) I'd be if there was a spa and gym like this in my daily life!


For Sunday's fun, we headed to the Tokyo Skytree, but were informed that the observation decks were closed due to wind (it was quite windy).  So, instead, we waited in line to take the elevator to the 31st floor and after surveying all of our options, had a traditional Japanese lunch (pictured at the top of the post).  This was like no bento box I'd ever seen and the servers were all in full kimonos with the toe socks and flip-flops.

For dinner, we headed to Inakaya with E's coworker.  Much yelling and cooking of items as ordered ensued.  E was recruited to pound mochi with a large wooden dowel while men who looked like sumo wrestlers yelled at him.  The food was delicious but couldn't begin to outweigh the hilarity of the experience.

And then it was Monday, time to go home.  Some work, another trip to the awesome gym/spa for me while E met with potential Japanese customers, then a quick trip to the market to buy rice triangles and rice crackers for the bus to the airport.

And voila, here we are.  Back home.
Posted by Biting Tongue at 12:01
Labels: food, restaurants, travel

Sounds like an amazing combination of work and play! I love Japanese food and drooled at every single description and photo -- with the exception of the live shrimp. Yikes! I also enjoyed imagining E pounding mochi while sumo-esque men yelled at him in Japanese.

Also, I agree that being able to read Kanji is invaluable to getting around. That was my experience in Japan as well. Your post makes me want to go back to Japan!

@FL & @Jen -- I thought about both of you on our trip. It was so amazing how much more difficult it was the first time without being able to recognize any Kanji.

@Jen -- it was primarily work, but the play was very food, language, and culture heavy, so I was happy.

Hey hey hey am I too late to opt into the running/eating/spa trip to Japan??

Loved this post, I flipping love Japan. Glad you had a good time.