So, for any of you who've became fit after not being fit, you know how exciting it is to make every little breakthrough.  For me, this week was so fun.  After several weeks of gradual build up, and three weeks of relatively intelligent concerted effort, this week I finally saw and felt some obvious fitness improvements.

Before we get to that, though, I'd like to point out that my favorite runner, Des Linden (formerly d'Avila) ran a 1:11:37 half at the New York Half Marathon today, on the tail end of 120 mile week: 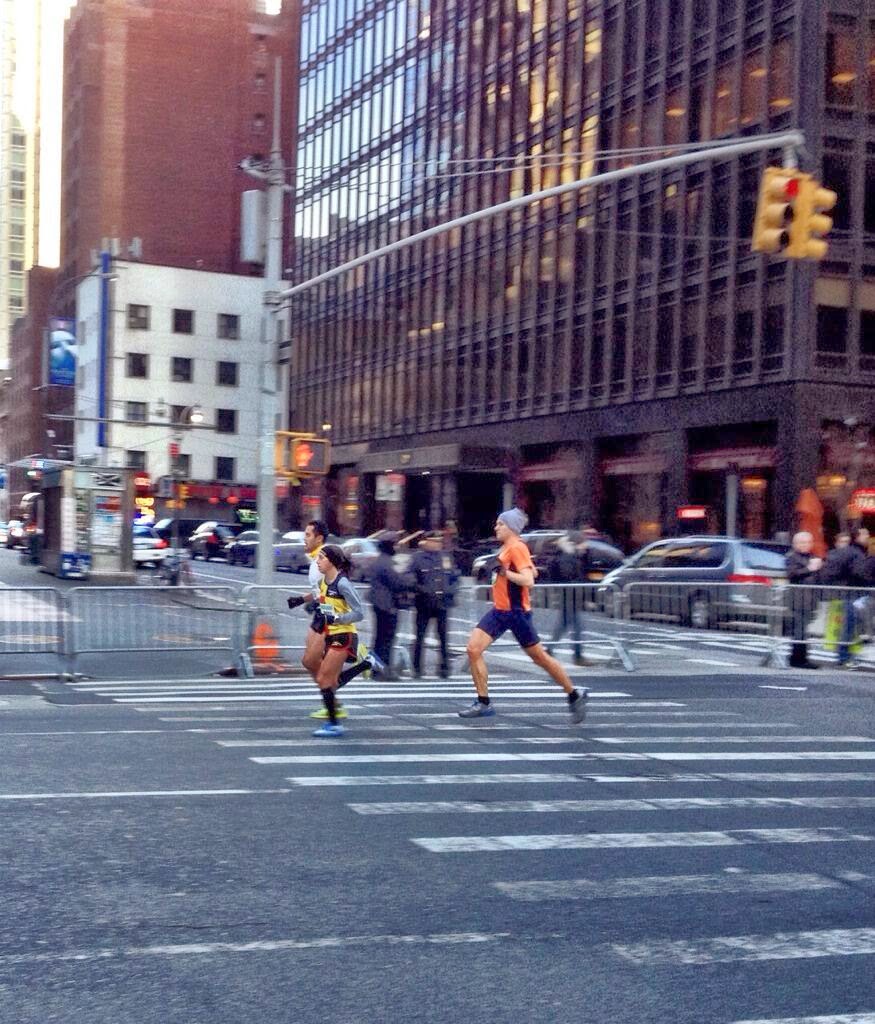 *I AM SO EXCITED TO WATCH THE BOSTON MARATHON!*

Back in 2011, I woke early and watched the full race via internet streaming on universalsports.com, and woke up E crying and clapping when Desi battled to her epic 2nd place finish.

I was so proud of her for any number of ridiculous self-identifying reasons (she's short, a Californian, a former soccer player, a ridiculously hard worker, supremely self-confident but also shy and/or awkward in a way I recognize, etc., etc.).  So, I did a bunch of research about Brooks-Hansen, was impressed with what they were doing for distance running in the U.S. and I switched to Brooks shoes.  I read the Hansons Marathon Method and implemented it, resulting in a ton of self-learning about who I am as a runner and both of my best long running efforts in the last few years (Coeur d'Alene, and CIM in 2011).

Returning to me, in much less dramatically fun running news, this week is the 4th week in a row I've hit 3(ish) key workouts/goals.

First thing I'm proud of -- total weekly mileage of 38.74.  I know myself and I know I need to get above 40mpw to start seeing actual impressive physical benefits.  I'm so happy that I've made the necessary commitments to get (almost) there.  I can feel the breakthroughs coming.  Mind you, this week's mileage includes at *least* 10 miles of walking, but for me, just committing to getting out on my feet is the important thing, and I know that.  Once I'm out there for the volume consistently, I tend to quickly decrease the total percentage of walking volume.

Track Day:  I sincerely owe my nascient local running club the Silicon Valley Striders for this one. There is no way I'd be increasing in my fitness as much as I have been these last few weeks, if I hadn't been joining SVS for both weekly track days and long run days. This Wednesday's track day was a struggle, but I did my best:

- 1.14 miles jogging warm-up (this is all me, the club usually shows up just for drills to warm up, but I'm old, and I have a hard time running fast without some easy time on the feet, plus, given that it decreases the pain of the track intervals it's kind of a freebie in terms of mileage).

Sadly, I had to leave immediately and did the dreaded driving cooldown... C'est La Vie.

Increased Long Run Effort:  Again, I owe SVS, first, I ran 3ish miles to join the SVS group at the park for the scheduled Sunday run.  But, I decided to take a new route and I got lost.  I had to pick up the pace.  Then, I hit the wrong button on my watch.  The end result is that I believe I did approximately 3.25 miles or so at 9:45/mile pace.  My goal had been 2.89 miles at 10/mile pace -- so we'll call this a win.

Then, I did 7 miles with K for her final long run before her first race (a half marathon! How cool is that?).   She kicked ass.  She started out so fast during the first mile that I tattled on her to the running club leader and made her slow down.  We completed the full 7 miles at an average pace of 11:43 after forced longer walk breaks and the pacers getting in front of her and slowing her down, compared to previous averages of 11:59ish.  I'm excited to see how she does at her first half marathon (the  Oakland Running Festival Half Marathon).

Then, F was sweet enough to pace me on my final effort mile in the park after the long easy effort.  I was somewhat suspicious that I didn't have the fitness to meet my goal, but no, I drafted for 1.5 loops and hit a mile at 8:59 after 10 miles medium and easy.  I can't even tell you how much this milestone meant to me.  I started this re-integration into fitness process about 20 pounds heavier than I should be.  But knowing I am headed in the right direction starting from such a disadvantage has me super excited about what I may be able to accomplish if I drop the weight.  I am stronger than I realized right now, which, in all honesty, is one of the cooler realizations you can make about yourself.

In other news, K, F & I all have significant others who don't really run (E is probably the biggest runner of all of them, and he often joins me for 1.5 miles hard in the low 9's or high 8's before a walking cooldown).  Today, at a party, K's SO and E agreed to sell out F's SO -- they agreed they will run a 5K so long as F's SO runs it as well.  I love mens' competitive willingness to sell each other out.  I am hopeful we can make this happen (and even more hopeful we could create a healthy fun habit we could all share).
Posted by Biting Tongue at 20:04
Labels: balance, family, running

I love, love, LOVE the Hanson Distance Project. A few years ago at the Brooks Coaches' Clinic, I heard co-owners/co-founders, Keith and Kevin Hanson tell the entire story of the project with a lot of ins and outs details. Did you know that they first started by hosting the athletes in their homes? Very cool project with sincere intentions (and very successful). It's one of the many reasons I <3 Brooks.

Great job on your training week! That interval workout looks tough, but like a lot of fun. I like varied distance speed workouts b/c they keep your mind occupied.

Keep up the good work!

Great progress! I'm excited for you. That 8:59 mile at the end of 10 miles really shows how far you've come.

Sorry we'll miss you at Oakland this year! Have fun in Jackson Hole. :)

Yay! It's always so awesome when you can feel a breakthrough happening after a bunch of hard work. Keep it up!!!

@L.A. Runner -- Every story I've read about the Hansons Distance Project has made me such a big fan of theirs. I didn't know the hosting started in their homes -- crazy!

@Jen -- have a great marathon! We'll have to catch up another time.

@Angela -- thanks. I agree, it's a very gratifying experience.

@All of you -- thanks so much for the support.

Great to run with you and K this past Sunday! I think there is hope for P yet; we were talking about when he could possibly run with the other SO's, which is further in the conversation than we'd ever gone on the topic of running.