Well, this race weekend was an unqualified success.

E and I drove down on Friday afternoon and enjoyed a beautiful and delicious date night on the ocean.  Saturday was race expo and carb loading with family plus a visit to a turtle and tortoise preserve. (Yes, you read that correctly.  That's our idea of fun.)

For the race, I had data from last year to help me calibrate my goals, and I was very proud to nail #1, which was the most important one -- I didn't blow up.  I ran a strong, smart race.

Goal #5 was always a bit pie-in-the sky, and frankly, after the first 2-3 miles, I knew I needed to let it go or I’d risk missing my most important goal, #1.  So, I re-assessed, conserved energy, and even walked for a minute and finished the Gatorade from my aunt on the last bit of the final big brutal uphill before the 7+ mile turn-around point.

The second half of the race felt better than the first, which has been a long time coming.  I've overestimated my fitness on almost all of the half marathons I've done in the last 2 years, so the last half has typically been very painful.  For today's wonderful gift, I owe thanks to the sincere evaluation of reality I did the night before the race to make sure I had reasonable goals, as well as several *very* important things:

1. The elevation profile (the 2nd half was more downhill, and if I'm not dying, dowhills are my strength).  I took it easy on the uphills and passed folks on the downhills.  Interestingly, I was regularly passed on the downhills between miles 6-11 by a woman who was taking consistent 2-3 minute walk breaks on the uphills -- she had a similar downhill style to me, but after her walk breaks could jam down the hills faster than I could.  I took note, wondering if I may actually prefer this approach on a very hilly course.  Something to consider for the future... 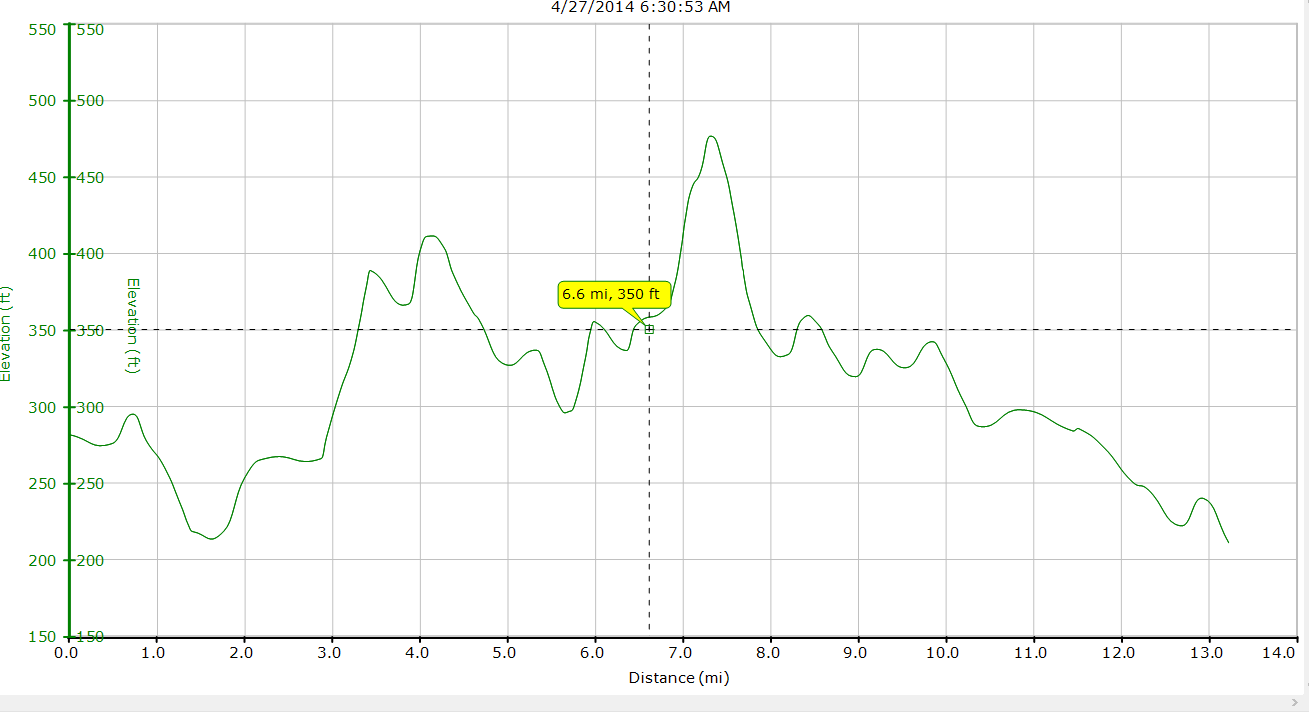 2.  Carb Loading, for reals. I'd been knowingly negatively affecting my ability to run over the last couple of months by decreasing my carbs because I need to lose some weight, and for me, this is a strategy that is helpful.  This meant my long training runs, in particular, we typically brutal.  But, in prep for the race, I threw caution to the wind starting two Fridays ago.  If we were at a restaurant and there was bread, I ate as much as I wanted.  Two Fridays ago, on date night, I laid into such an epic serving of vegetarian pasta with olives, red pepper flakes and cheese that the server complimented me on finishing it, claiming, "I've never actually seen a lady finish this dish."  This Thursday, before a hike with E2, I did the same for lunch, finishing a large serving of seafood pasta and some bread.  Saturday, with my aunt and uncle for a pre-race meal, I had yet another pasta dish -- a delicious homemade garganelli with sausage, brocolli rabe, and peppers *with a side of polenta* (that E finished).  The interesting (to me) side effect of a week of choices like this (interspersed with more standard healthy light fare) was that it stopped the slow weight decline I'd been experiencing, but I could feel my energy levels going up on a daily basis and I started sleeping better.  For someone who loves pasta but almost never eats it, this week was a big splurge and I'm happy there were some obvious energy benefits.  The difference between my energy levels after an hour on almost all of my long runs in 2014 and today's race was like night and day.


3. Rest.   I left my last client of the day on Friday at 2 PM and set my out of office.  I took a call while E drove from 3 - 3:30 PM, and that was it.  I checked my email maybe one or two times over the weekend, but, for the most part, I didn't do any real work from 3:30 PM Friday until now.  Add to this that Friday night I was in bed, post hot tub, and healthy dinner by 10 PM, and that I took a nap on Saturday afternoon.  Oh, and miracle of miracles, somehow, despite the rock bands, with my earplugs, I was able to fall asleep in downtown SLO and sleep (albeit interrupted every few hours) from 10 PM to 5:45 AM.  I hadn't been this well rested in a long time.

In fact, in a very common end of race story for me, yet again, the last 0.14 miles were all out.  In testament to just how well fueled I was, I did this bit at a 7:02/mile pace. A youngster at least 15 years younger than me (or so I told myself) came out of nowhere and decided to try to sprint past me in the final 0.1 mile.  I made her work for it, digging deep into the reserves I’d built up from all of the track sessions (and laughing at the ridiculousness of my pace for a 2:15ish half finish) but she managed to intelligently line up to pass the other folks in the chute, so I let her go rather than run over a couple in front of me.  Unlike other historic last minute sprints, this one didn’t bother me so much, she hadn’t been anywhere near me for any part of the race – I’m guessing she either started late or started *very* easy and just kept picking it up to the end.

As promised, my Aunt met me on course, with a sign, after the worst uphill, and she handed me the small Gatorade bottle I'd given her.  This meant I could hold it, run, and drink sports drink when I felt like it and keep a nice easy pace without worrying about aid stations until the top of the hill at Mile 7 (where I took a Mocha cliff shot… mmmm… caffeine).

The Gatorade plus 2 mocha cliff shots and water and sports drink on the course coupled with the carb loading meant that I felt the best I’ve felt at the finish of this race than I’ve felt in a long, long time at a finish.  I actually think I could have run another 5 miles at a good solid pace after the finish, but if you'd asked me whether I could do 17 at hard effort yesterday, I would have said, "NO WAY!"

Bonus, I just confirmed that I actually have 5 weeks ‘til my next race, a half with my sister, not 3, so I’m in perfect shape to capitalize on this run and make a strong effort to make additional fitness gains so I can enjoy a great race with her.  I haven't been this excited about running in a long time.

As for the race weekend, E, my aunt, uncle, and I solidified many details to make this race much more doable this year, including locking down the hotels to ensure comfort and luxury on Friday night date night and moving to a budget motel for walking distance to the start for Saturday, as well as driving plans for in-town family to aovid the road closures, and the go-to post-race brunch location (with awesome bloody mary’s).

My aunt was so adorably supportive this weekend.  She came with me to the expo and cracked up the cliff shot dude by telling him she wanted to put cliff shots on ice cream.  She was so obviously excited about being involved in the race weekend for the second year in a row and kept saying things prefaced with, “Next year, I’ll...” In her mind, there is no question.  This is an annual family tradition.

After today, with perfect weather, a great race, and beautiful views of the San Luis Obispo hills, I tend to agree with her.

Congrats on a great race, T!! Was thinking of you when I was pounding the pavement this morning. Proud of you and happy you had a happy race weekend. :)

Thanks, FL. I'm proud, too. Hoping to enlist you to join me on some mid-length runs over the next 4 weeks!

CONGRATS!! I'm so happy to hear you had a good race!! I was about to fall asleep last night and realized that I hadn't asked about your race, even though you sent me a thoughtful tweet/message about Big Sur. (I'm a jerk sometimes, sorry!)

@Jen -- no worries. A full takes *everything* out of you, as we both know.