I follow a bunch of running bloggers who've posted all sorts of pictures and race recaps about relays.  They look so fun that when some local running bloggers asked if anyone was interested in joining their Ragnar Napa team (Golden Gate park to Calistoga via Sonoma), I did.

And in doing so this weekend, I earned so-called "eternal glory" (or at least a headband proclaiming the same) for running the longest leg as my final performance.

First of all, I'd like to thank all the awesome folks who were on our team (You're the Wine That I Want -- voted into the top 25 team names by Ragnar!).  11 semi-random people plus a driver and yet no drama or assholery despite sleep deprivation, runger, and serious human and agricultural funk (stink-y!).  If you're looking for cool running folks to follow online, I highly recommend @milfrunner @just_plodding @CathrynTheBrit @RunOnWaffles @dine_and_dash and wonderjess (DailyMile).  These folks are nice, competent, organized, friendly, funny, and just generally great.

Second of all, I'd like to say that there were definitely routes on this relay that I'd *never* run on my own if I didn't have a team counting on me.  My first leg was scary -- on a curving two-lane road with lots of traffic including RVs and essentially no shoulder except weeds, ditches, and occasionally blackberries.  Also, I started at 4:11 PM in the afternoon heat and attacked this fun elevation profile: 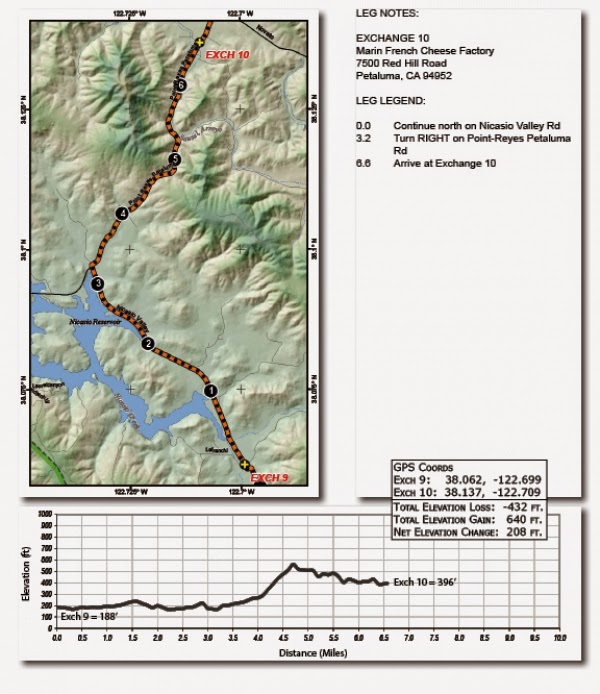 But, for the sake of the team, I did it and each time I felt that I had to jump into a ditch to avoid danger, I chalked it up to an adventure.  I was totally proud of my 11:15 average pace -- I felt like I made a huge effort but was also smart re: safety.  Finally, at the exchange, as Jess requested, I arrived ready to slap that slap bracelet like no-one's business:

My night leg was relatively uneventful, although I took off with the mistaken impression that it would be flat (the 1,000 foot y-axis in the leg map misled me) and colder than it was (61F, approximately 100% humidity): 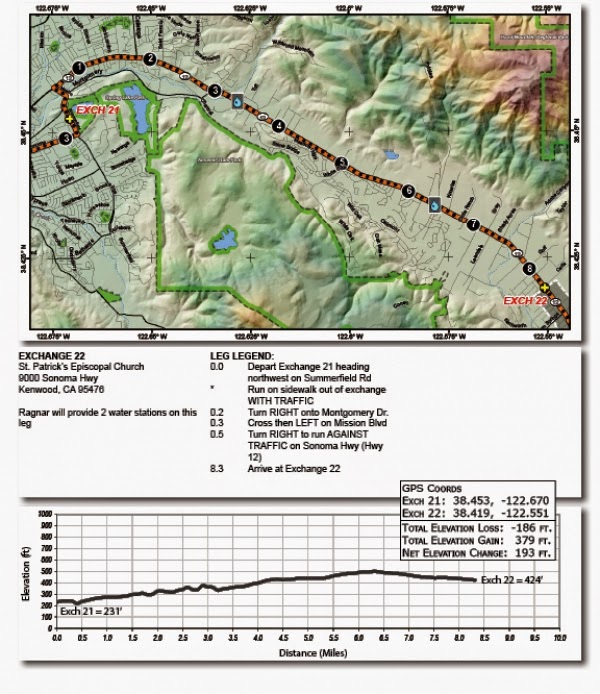 8.3 miles of climbing (462 ft says garmin) after 3ish hours of interrupted sleep in the dark at 10:45/mile pace was all I could manage, but I was happy as it was a solid effort.  The strangest part was the fog -- wearing a headlamp and running in the fog in the dark means that you see individual water droplets suspended in the air in the illuminated circle for the entire run!

I told myself not to think about leg 34 during the earlier parts of the race, so I didn't.  Unfortunately for me (but good for the team) we made up quite a bit of time, so I ended up heading out at 2:53 PM in the height of the heat and direct sun for 11.4 miles and 501 ft. of climbing (says Garmin). 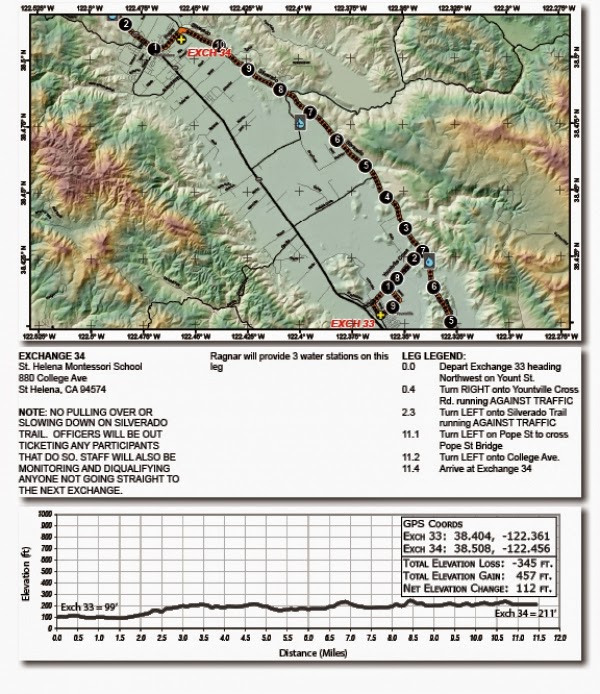 At the exchange to take off for my last leg, JL told me to take it easy (slapping the slap bracelet after her 9 miler in the early afternoon heat and speaking from experience), and I really tried.  I hit mile 5 at a 12:00/mile average pace and felt proud of myself for being reasonably conservative.  But, shortly after that, the direct sun and heat combined to undo me.  I stopped to use a porta-john at the second water station and realized that despite the 1-2 minute break my heart rate hadn't dropped much at all.  I was very concerned about heat sickness and didn't want to ruin my marathon training, so I slowed to run/walk intervals, initially trying to keep them below 14 min/mile and then, finally, texting the team to let them know that I would be late and settling on 15 min/mile.

The best thing that happened to me on this leg was around mile 7 -- I tried to start running once I crested the hill, but I was just too heat exhausted.  So I returned to a walk, dejectedly.  A car on the other side of the Silverado Trail screeched a u-turn and stopped on the side of the road in front of me.  As I approached, he popped his trunk, dunked a sponge into a cooler full of ice water and handed it to me.  AMAZING!  He also let a woman who was gaining on me (and passed me) take advantage.  As we thanked him, he simply said, "you're lucky -- you're roughly my wife's pace."  I took two full sponge squeezes and was able to use the coolness to run at least 3/4 of a mile without a break -- the farthest I'd go without a walk break for the remainder of the leg.  Mental note -- the next time I go to support runners at a hot race, I'm definitely taking a cooler full of ice water and a sponge -- it's like magic.

Also, his actions confirmed to me what our team had suspected -- the prohibition on runner support on some legs (all of my legs) due to traffic issues was definitely not being enforced.  Because of the lackadaisical rule enforcement, I felt a bit penalized for being on a team that followed the rules, as those who didn't were obviously at an advantage.  But, then again, I *really* enjoyed the folks on my team.  In fact, I was probably one of the biggest rule-breakers on it (which, if you know me, should give you some perspective, these were some *rule* *observant* *folks*).

This AM, I had 6 miles on the schedule.  I woke, slightly tight, but really, feeling pretty darn good after 26.49 miles in the last 25h20.  But... I had a blister from my last leg.  I'd soaked and wrapped and put on compression socks last night, but it had only half absorbed.  So I took it as a sign to move my off day this week to today, slept in, aggressively treated the blister, and just generally had a wonderfully lazy day (including an unexpected visit from @CathrynTheBrit and her family, which was so fun).

Total mileage for the week: 42.91.  Total below 10/mile -- 15-20%.  Last "long run" for marathon training done on a relay experiment?  I think it worked well for me.  I feel very confident that between the sleep deprivation, climbing, and heat I got just as much out of the relay as I would have on a long last solo long run weekend.  And, OBVIOUSLY, I had way more fun.

CONGRATS on your accomplishment! That photo of you is super cute and I love the t-shirt, especially your team name.

Very succinct recap, I could learn a lot from you.

SO much fun - thank you so much for taking the toughest legs and rocking them, you were such a star! Thank you also for making a little man's day today!!

@FL -- the team name took much voting and was one of many impressive collaborative efforts of this group of folks. I know you needed to focus on Chicago, but if this group decides to do another relay and needs a runner, I think you'd really enjoy joining them, they are great!

@Cathryn -- my teenage nick-name was turbo-tongue. I'm rarely succinct. I'm thrilled to have had the opportunity to do my last long run weekend with such a fun group of folks. (And of course, we're super excited the little man loves Rockets!).

VERY cool and I love your pictures! Relays are so much fun; and I'm glad you enjoyed it, too.

Awesome. Those are adorable photos. :)

Looks like you guys had a lot of fun out there!!

Congrats on powering through an awesome last leg like that!! Well done, all!

Great recap and GREAT job on those most beastly legs! Wishing you a great upcoming marathon :)

ETERNAL GLORY!!!
You had the most challenging legs by far on several accounts - length, elevation gain, heat, and sketchiness of the roads. Maybe this wasn't the most conventional way to do your last long run, but I'm sure you gained a lot in the mental strength department. And like you said, had a lot more fun doing it. I'm so glad you were able to join us! Van J for the win!!