Starting with the college trip on Suntrips (a California-based Hawaiian travel coordinator that appears to have gone out of business), Hawaii has always been a fun escape for me.  That initial trip (which was hilariously full of  The Real World (rememeber that?) teppanyaki, beaches, hanauma bay snorkeling, karaoke, and getting lost in a neighborhood where roommate's Japanese was required to get us un-lost) set the tone.  This place is full of adventure, is breathtakingly gorgeous, has amazing food, is a cultural experience every time and yet it's still very American, so it's not really very stressful and most stuff works the way I expect.


The young woman I was returned from the Suntrips trip and proclaimed, "It's lazy tourism.  It's expensive.  There are so many better places you can go to and experience for less money."  And she was right.  But you pay for those trips with time.  Of which she had plenty.

And me, today, not so much.  In fact, my access to time has essentially decreased geometrically since then.  Oh, the halcyon days of free time and youth...

So, since that first trip, I've returned to the 50th State in the Union 7 more times  including this one.

I so desperately needed some true downtime.  But, par for the course, I also needed to work.  Not a ton, but a bit.  I needed WiFi.  I needed to not have to spend an inordinate amount of time dealing with customs and linguistics and infrastructural realities.

E & I had planned this trip with 4 goals.

1:  minimal disruption to our normal work-life routine, and, sadly, maintained ability to work like normal if necessary.  Success.  This is why I love resorts run by business hotel chains.  Enough said.

2:  4 nights away, most likely with 2 half-working days, so attempt to minimize the time change and after-effects, but still feel far enough away that when we choose to disconnect, it *feels* like vacation.  Done.

3:  Food.  I'd read that Honolulu was quite the food city.  So, we decided to try to do a Japanese/Hawaiian food trip with a goal of hitting up as many awesome Honolulu treats as possible.  We completely succeeded.  The first night's random mall sushi was phenomenal.  Seriously.  2 blocks from our hotel and some of the best sushi we'd ever enjoyed (and we love us some sushi!).

The second day's lunch was Onigiri from ABC and dinner at Nanzan Giro Giro was super celebratory and fancy but functionally serviceable food in a way that made E very happy.  Even better, our server recommended Agu Ramen when we asked about noodles.

We went on a Saturday at 2:30 to Agu, waited for a short 15 minutes to be seated and enjoyed hands down the best ramen either of us had ever had.  Mind you, we love ramen and have sampled quite a bit all over the world.

Last night, we opted into teppanyaki.  It was over the top and full of fire and did not disappoint.

Of course, one of the best things about Hawaii is Poke.  So we also had Poke from a grocery store (Foodland!) deli counter for our final dinner while watching the sunset to close out the trip. 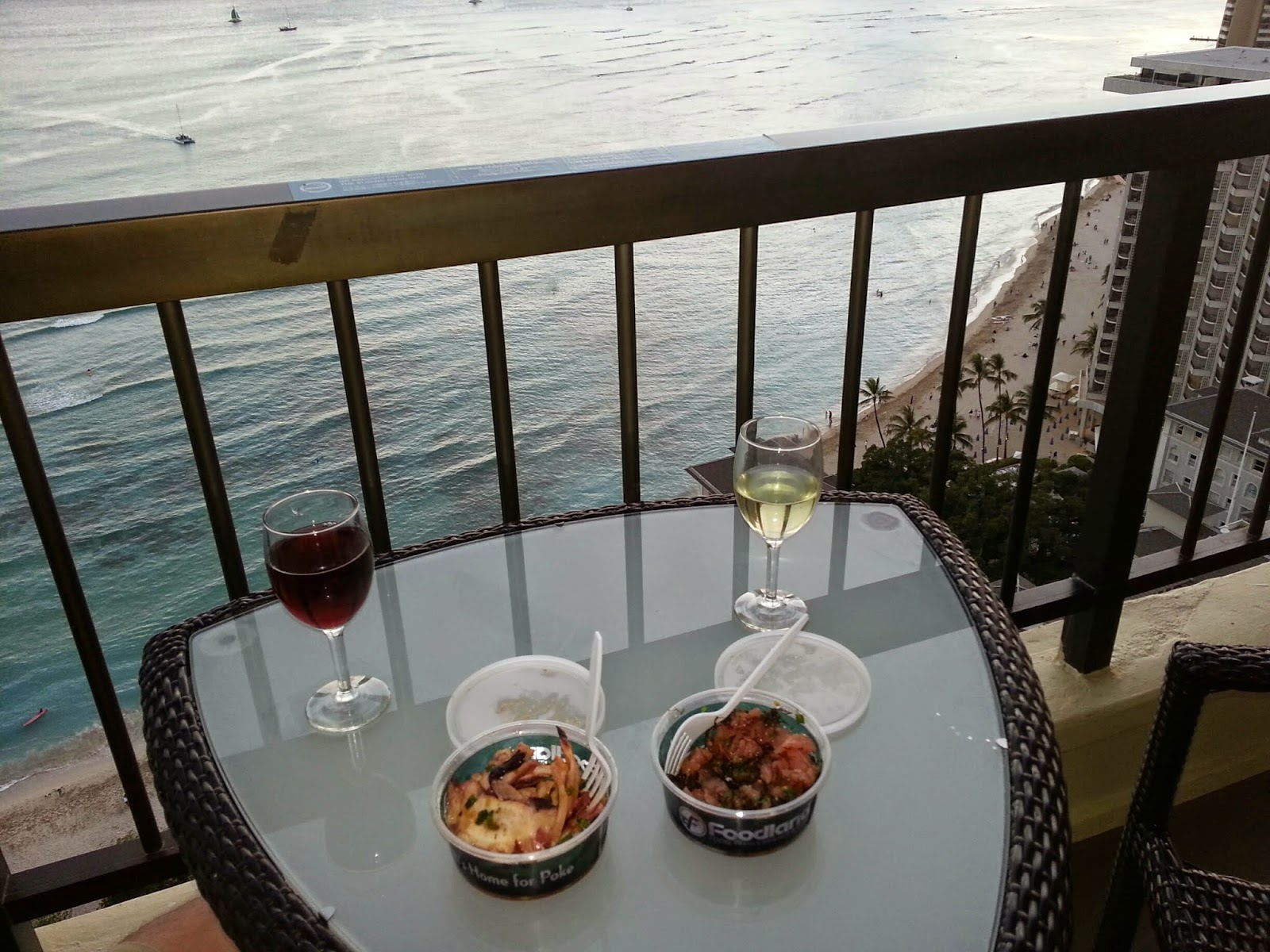 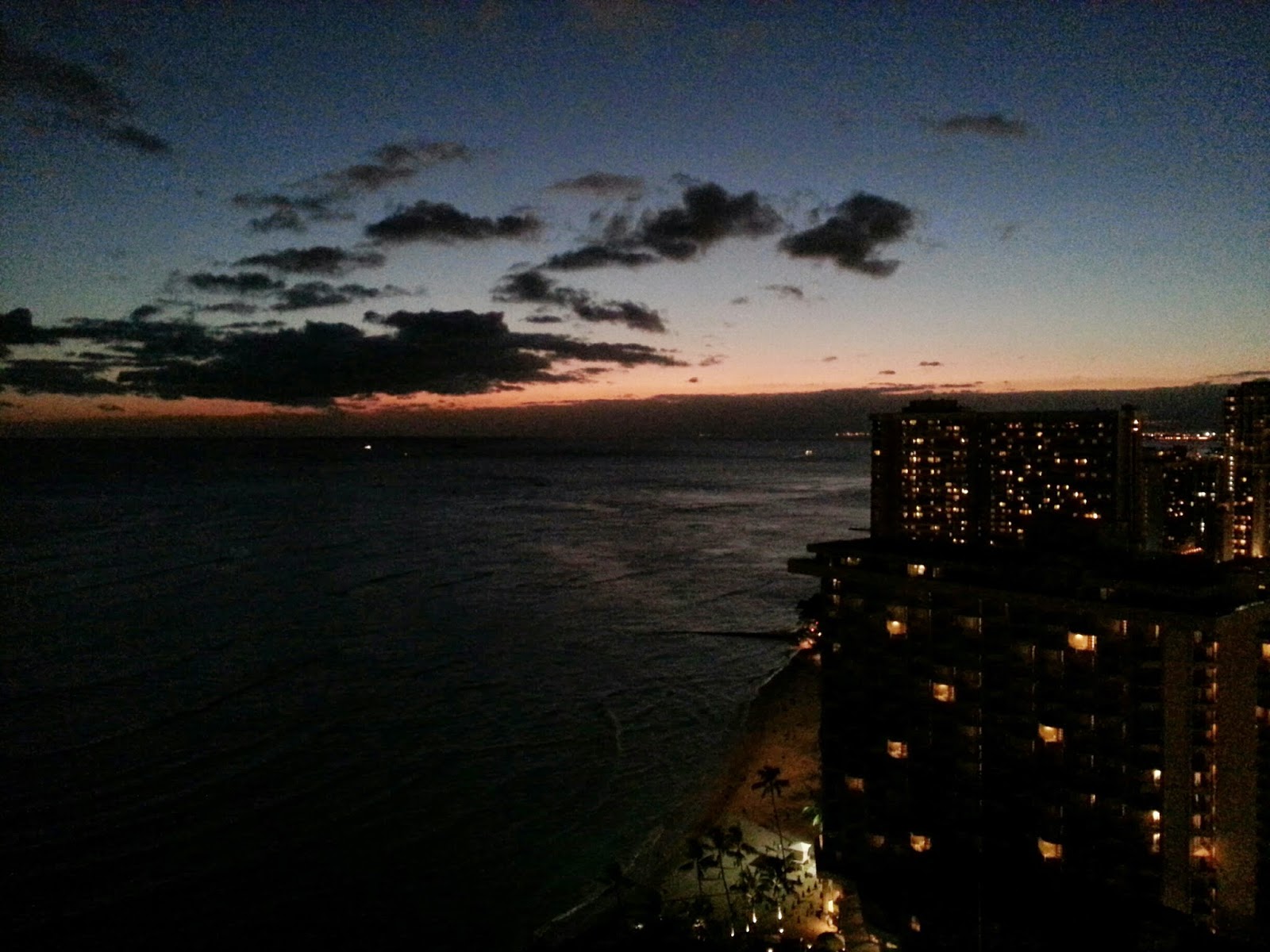 4: Hiking.  We decided that in terms of activities, other than eating, beaching, pool-reading, and hot-tubbing, all we really wanted to do was fit in a hike on every day we didn't fly.

First, we did The Makapu'u Lighthouse Trail hike -- SO MANY WHALES.  It was amazing to see their blowhole expirations and jumps and just general migrations (always in small groups).   Migrating whales will bring a smile to your face.  I don't care who you are. It's very cool to see.


The next day, E and I walked four miles to the Diamond Head State Park entrance and then clamored with the crowds up and down all the stairs and through the tunnels.  Sure it's a tourist nest of madness (like Yosemite) but it's also that for a reason.  It's so cool!


Our final hiking day we headed out to Wa-ahila Ridge Trail.  It had been recommended by a friend we trust, so we knew it would be good.  What we couldn't figure out, however was what to expect.  Some of the reviews claimed it was extremely technical and difficult with people turning back before the summit.  Others said it was moderate.  Most of the estimates claimed 2 hours for less than 3.5 miles round trip.  This seemed a bit crazy if it actually was as moderate as some folks said it was. 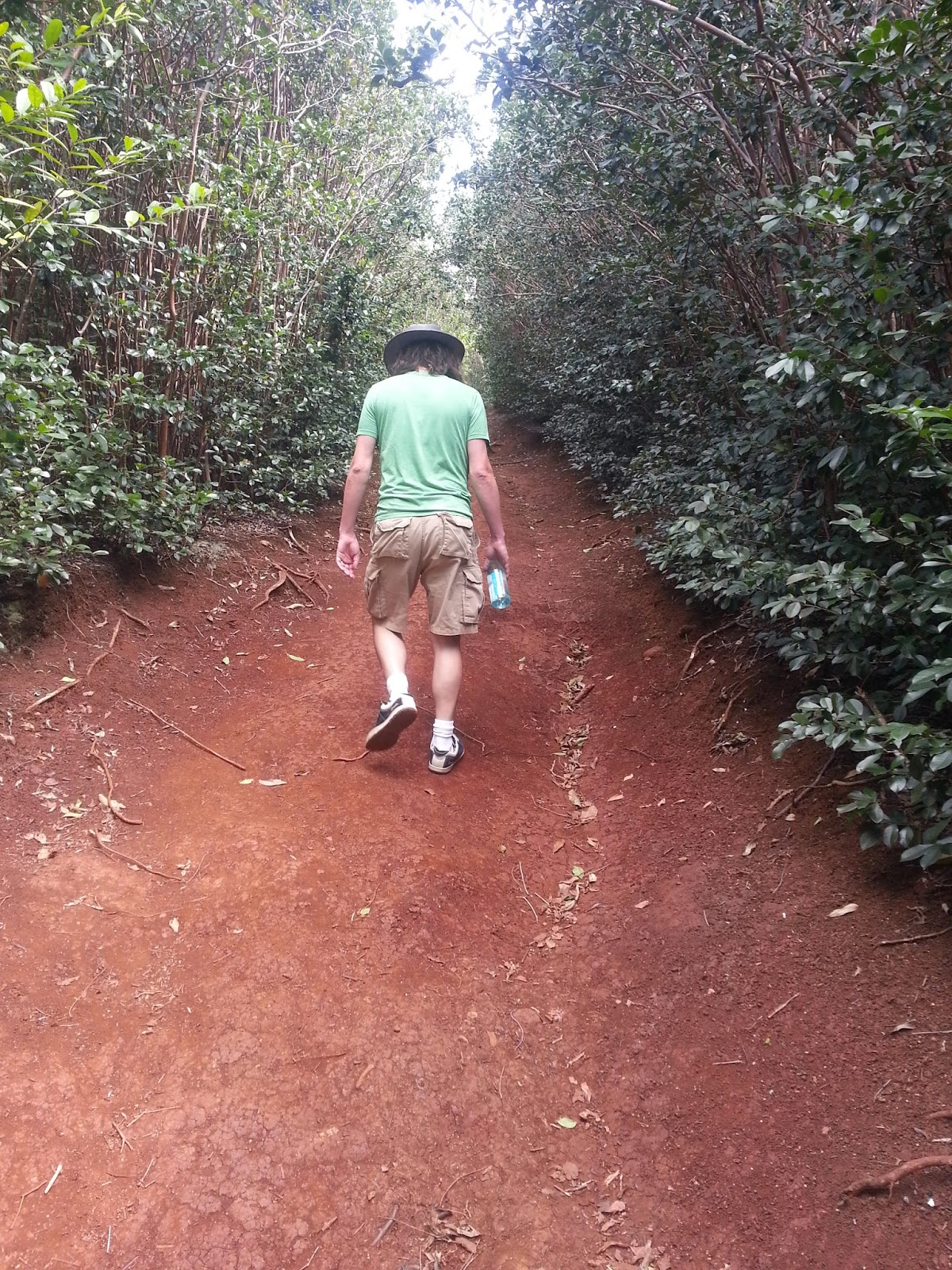 It started with a decent incline on deep red clay.  I could see how if it had been raining, it could have been very difficult, but thankfully, it was dry for our hike.
Once we reached the ridgeline, it was definitely a true ridge.  The trail was about 3-4 feet wide, with vegetation on both sides and the ground went steeply down on both sides from the trail.  So, this explained some of the comments about how this was not a hike for those who are scared of heights.  There was quite a bit of loose dirt and you did need to be careful with foot placement, but it didn't feel unsafe.

Eventually, we hit the section of the trail where folks had warned that there were *many* challenging roots.

Finally, at 1h20 minutes and just shy of 1.7 miles, the summit delivered the promised 180 degree views of Honolulu, the ocean, the next ridge, and the airport. 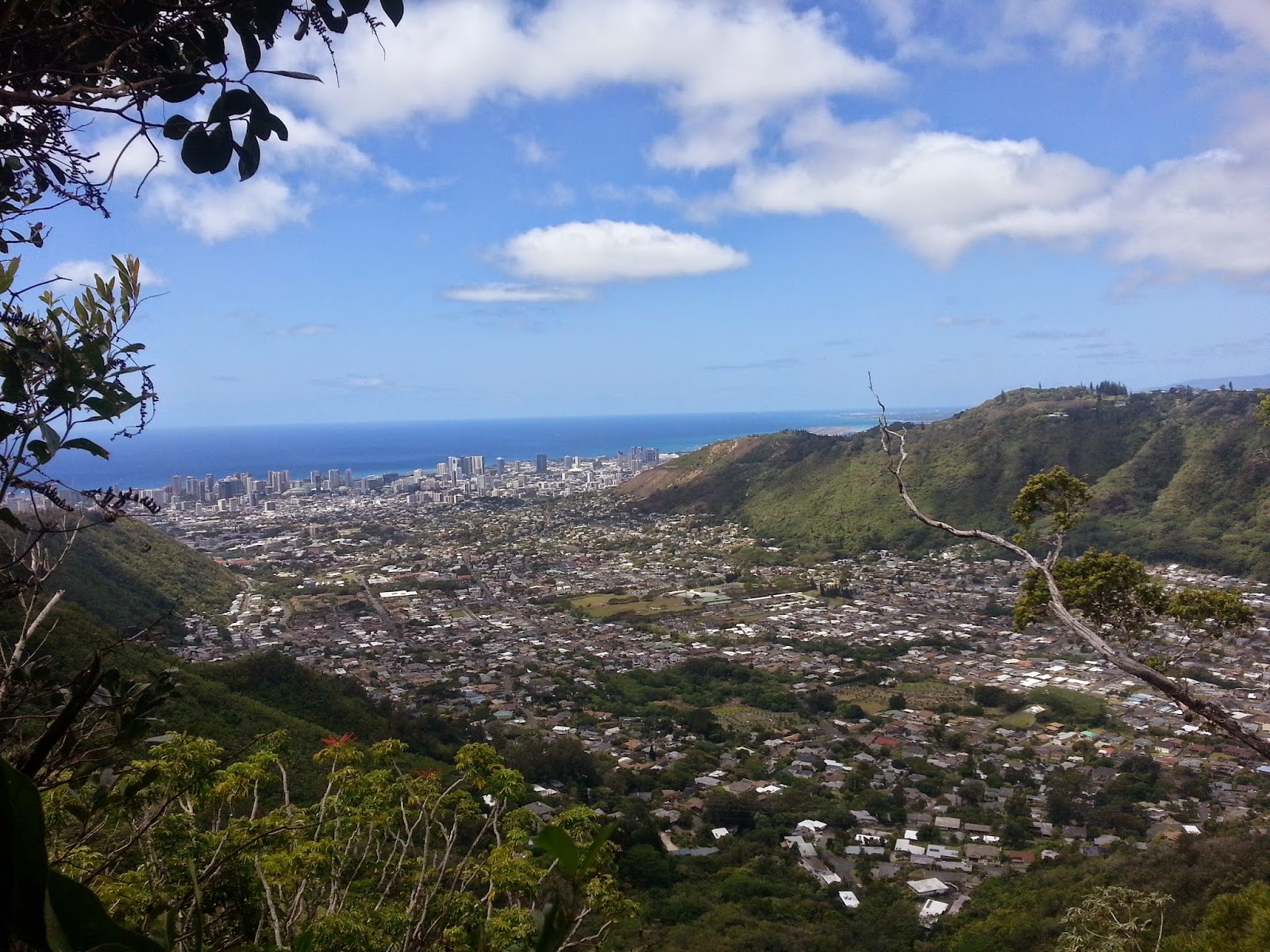 Overall, this was E's and my favorite hike of the trip.  But it was much more physically demanding than we expected (several very steep climbs and much more arm use than I'm used to, E had a serious height advantage and didn't have to pull himself up as much as I did).  Total time round-trip including stops for views and water? 2 hours 5 minutes.  Guess those estimates were not wrong.  Short restatement of the reviews now that I've been there and done that?  If it hasn't rained and you weren't scared of heights, if you are short this is moderate hard (due to arm climbs/supports), if you are tall, it's moderate.  If you've got a kid in a pack, it's probably quite difficult.  I would *not* recommend this hike if it had been raining on the days prior.

I took the liberty of counting all of the hiking mileage in my total for the week.  31.91.  Not great, but not terrible.  Today, I did a slow aerobic climb and descent 5 mile loop easy run around diamond head as my farewell to the beautiful state.  I clearly chose the wrong direction as I spent it being motioned to the side by large running groups.  C'est la vie.

With all of this, I'll finalize the night before the actual half marathon to confirm, but I think I've decided I'll count next Sunday as a good day if I finish sub 2h30 (which, given that I finished 3 miles around 2h05 on yesterday's hike is an impressive goal. No?).
Posted by Biting Tongue at 23:53
Labels: balance, food, running, travel