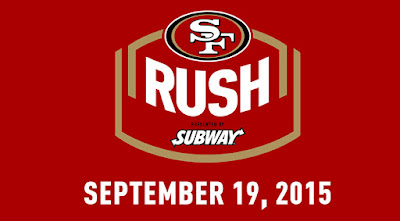 The night before, we went out for Mexican food and margaritas.  Our favorite local Mexican restaurant is closing (moving, but closing the location where its been for 24 years, down the street from our house and regularly visited by us for 12 years).  Going and visiting one last time (or perhaps the 2nd to the last time -- we'll see how this week goes) was too important to let pre-race nutrition get in the way.

So, we woke sort-of prepared at 7 AM on Saturday, enjoyed some coffee, and drove to the new Levi Stadium.  Neither of us had seen it before, so that made the day a bit more fun as well.

I was hopeful that the speed intervals and heat training in LA would put me in a decent spot, but honestly, I didn't totally know what to expect, fitness-wise, as it's been a very long time since I actually *raced* a race.

The last several races I've participated in, I've just done them to get them done.  I haven't really pushed myself to the edge of my fitness since The Oakland Half Marathon, but pacing well through a half is very different than pushing on a shorter race.

Based on my speed intervals in Venice and what I perceived to be my general fitness, I decided I should shoot for sub-30 as a very doable goal (even with the crowds, stairs into the stadium, ridiculous numbers of turns, and walkers and unpredictable families/groups).  I told E I'd be thrilled with anything sub-28. 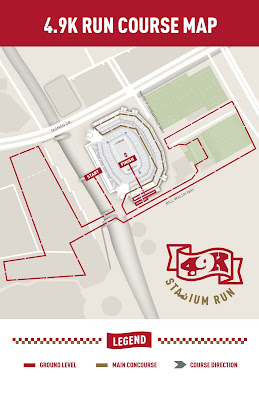 There were 3 start waves, but no enforcement, and by the time we went to line up, wave 1 was packed elbow-to-elbow with many folks who looked like they'd probably be walking a least a little bit.

We opted into wave 2, and watched wave 1 head out.  About 10 minutes later, they started wave 2.

Or rather, they tried to start wave 2.

There were drummers and cheerleaders and the announcer worked up the crowd, letting us know we would be starting soon, shouting 5-4-3-2-1, and then blowing his referee's whistle into the microphone (just like what he'd done for wave 1).

For some reason *all* of the people lined up on the front of the start line didn't go on the whistle.  The rest of the crowd leaned forward yelling, "Go!!!!" and finally, they went and we were off.

I'd angled for a position near the start, and I took off faster than I otherwise would with a goal of maneuvering through the folks who'd lined up at the start but were likely going to jog or walk rather than run.  After about 200 meters, E and I were in the first 20 folks or so of our wave and we hung on to that position for the first mile.  It was quite fun to look at hundreds of folks stretched out behind us as we headed back towards the stadium.  I'd never been that close to the "leaders" in a big race, ever.

E asked me for our pace at around 0.8 miles and I found myself surprised to report that we were on track for an 8:44 mile.  My effort was where I wanted it for a 5K, but I'd expected to be closer to 9:20/mile or so.  This was good stuff.

Did I mention it was cool this AM?  Thank you LA heat training!

We hit the Mile 1 marker at 0.95 miles on my Garmin and I assumed the course would likely be short.  Mile 2 slowed us down significantly as we starting needing to weave through the walkers from wave one (also, I was fairly certain there wasn't really any way I could sustain the 8:44/mile pace my Garmin claimed we hit for mile 1).

I told E I wanted to walk up the stairs into the stadium rather than run them, and he slowed to stay with me.  At the top, we passed the Mile 2 marker but my Garmin said it was 1.85 miles.  At this point, we entered the covered main concourse, so my Garmin wasn't super useful -- after a few minutes under the cover, it claimed we hit mile 2 at 18:45, which seems a little slow, but possibly correct.

For the last "mile", E paced a few steps in front of me until we turned the last corner into the stadium after the switchback down ramps.  He took off like crazy towards the finish and I kicked up my effort a bit, but not so much as to pass an adorable little girl of 6 or so, whose father encouraged, "See the Finish Line?  Give it all you've got!"  She was sped up to a speedy pace, passing folks on her way in, and while I could have (probably?) passed her, it seemed like a silly thing to try to do. 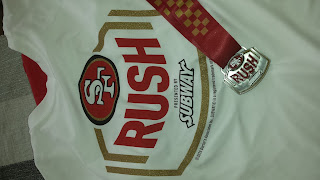 So, I blew by my sub-28 minute goal.  But, based on the mile marker placement at 1 and 2, I'm assuming the course was short.  I don't think it was *as* short at my Garmin said due to the covered portion, but I do think I slowed a bit after that blazing (for me) first mile.  So, I'm going to split the difference and assume the course was around 2.8 miles, which puts me at a 9:17/mile average pace.

Overall, I'm very happy (particularly because E enjoyed himself so much that on the way home he said, "We should try to run more local 5Ks.").

It was fun to remember how good it feels to actually race, to see the new stadium, to finish on this year's Super Bowl field, and to spend the morning running with E.  Also, I'm very pleased to learn that I actually did make some fitness gains in the last few weeks, despite all of the travel.

I'm definitely looking forward to seeing how things play out in next week's 10K.
Posted by Biting Tongue at 10:41
Labels: balance, running

Sounds like a fun time, despite the short course (which is always frustrating, especially for a road race).

@Jen - given that it wasn't serious, the short course was way less disappointing than it would have been with a true road race. Overall, it was, as you guessed, totally fun. Especially getting to hold the lead for our corral! I'd never had that joy before. It's fun!