So, one of my favorite games is to maximize travel points.  It's like gambling to me.  This trip, we stayed 4 nights in hotels on Hyatt points.  The first 2 nights were at the Park Hyatt Tokyo, which has  such amazing views. 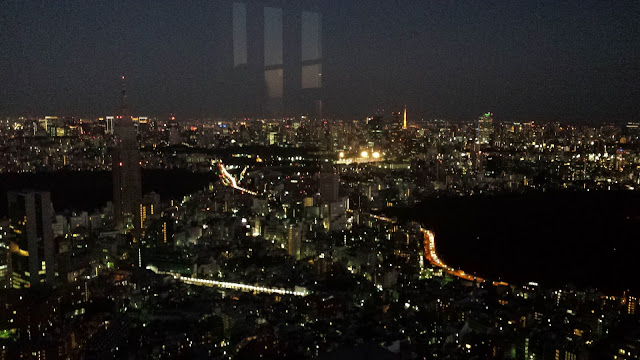 Because of my travel reward obsession, one of the perks we get at the Hyatt is free breakfast.  Which, at the Park Hyatt on the first morning was all of this:


Thanks to the gigantic Japanese breakfast, we actually didn't gorge ourselves at the Robata that night, which was a first.


To date, the ramen bowl count is 2.  Once as a shared late afternoon snack in the work hotel basement.  And once for me with a friend in Shinatatsu (aka Shinagawa Ramen Alley).  I wish I could have had more ramen, but then I would have had to have less other stuff...

Of course we had sashimi and sushi -- often just a small course in a meal.  There was a very fancy sashimi and sushi business dinner at a historic restaurant in Roppongi, which was awesome.  The next night, we went with friends to the local kaiten-zushi (conveyor belt sushi) and stuffed ourselves silly for less than $10 per person -- I'm probably a bad cultural appreciator, but I think I preferred the chaos, craziness, and fun of the conveyor belt experience to the traditional one (where the sushi was, of course, better, but it's not like the kaiten sushi was bad).  One day, I treated myself to basement chirashi as a study break from work.


Japan is a great country for snacks, but we didn't really snack very much this trip.  The one snack we did enjoy was sugar crystal coated rice heart crackers, a gift from my childhood Japanese exchange student (eaten on the Romance Car train from Tokyo to Hakone). 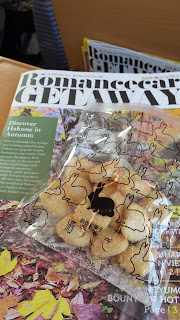 Perhaps one of the most memorable meals of the trip was Friday night's izakaya splurge.  E & I were both done with work for the week, so we headed out for a night of drinking and dining in the local style.


There were also 2 other very memorable meals.  The first one is very special to me because I had a reunion with my junior high foreign exchange student after 27+ years.

She took me out to a very traditional fancy kaiseki meal on the top of a tower with 360 degree views of Yokohama.  When it came time to argue over the check, she stopped me cold with, "This is my parent's card.  They insist."  I got a little teary eyed over that one.  Her parents, whom I've never met, insisted on treating me to lunch -- so touching.  Totally something my dad would have done, too.
Our final memorable meal of the trip was Halloween night.  After another free Japanese breakfast (with pickles!) at another Hyatt, we spent the day sightseeing in Hakone. 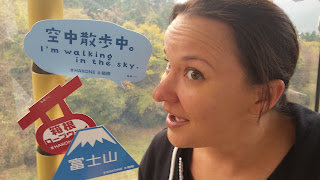 For the afternoon, we braved the cultural craziness of a local public onsen to access a private bath we'd reserved.  2 hours of nothing but naked relaxation in hot running mineral water (and a couple of vending machine Asahi beers).  We left the building more relaxed than we'd both been in a long time.  The exit of the onsen caused you to walk through a local shrine, which was a perfect way to end the long soak.

For dinner, our hotel had made us reservations at a local teppanyaki joint.  Teppanyaki is one of E's favorite styles of food, so we were looking forward to this (and hungry from our day's adventures).

We arrived and were very surprised to learn that the local teppanyaki joint was actually ITOH Dining by NOBU.


So, E decided to take advantage of the situation and actually ordered the Kobe beef (a first for both of us).  I stuck with Wagyu so that we could compare.  Guess what?  I like Wagyu better than Kobe!  Win for me.

The entire meal was sublime.  Definitely the best Nobu experience we've ever had (compared to San Diego and Las Vegas).  The steak was seared simply in small cubes with salt and pepper, served with a different sauce for each steak and roasted garlic chips on top. 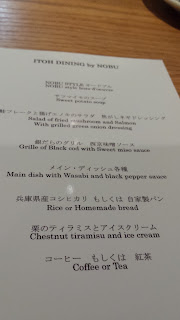 In addition to the set menu, they spoiled us with a few amuse bouches (including the truffle edamame), and some bonus courses of a sweet potato soup with a purple sauce garnish, and fois gras.  The fois gras wasn't served with any acid, and I was apprehensive, but I shouldn't have been.  It was at the right point in the meal where our palates were perfectly primed for it, and it was the best melt-in-your mouth fois gras I've ever eaten.  We loved our chef.  He was friendly and so precise with each of his movements.  He presented us with his card at the end of the meal, so we gave him our cards and told him we'd take him out to dinner if he ever came to the bay area.

And with that, after today's free hotel breakfast, we're starting the long trip home where we'll just eat whatever the travel gods (and possibly vending machines) throw our way.  Just a shuttle bus, a shinkansen, the Narita express, a trans-pacific flight, clearing customs and immigration, a 4 hour layover, and a local flight 'til home...