So, a while back, I bailed on the Danville 10K that so many of my bay area running friends were doing.  Turns out Cat PR'd (thanks to some fancy pacing from Angela), as did Jen.  I bailed in order to do the Chrissy Field Parkrun today with E and his best friend (C) and C's wife (G).

It was the right call for me, even though I felt super jealous of the Danville folks throughout the day.  E PR'd pacing C to his first full 5K (E has a much faster 5K in him if he ever decides he wants it, but I digress).  C tried to keep it low-key since he's one of those "I don't enjoy working out" types, but after the finish he was texting family and friends, and just generally very proud of himself for coming in sub 30 on his first 5K (which is a big deal, and super impressive).  He seemed a bit surprised at all of the invitations from folks who weren't there to join various running activities now that he's shown himself capable of "running."

In the interests of respecting E&C's privacy, I won't post their very *unique* finishing photos (which show how much effort the end was -- even in SF, while not Danville, the sun on the backstretch was direct and hot).  I will however post the competition they successfully bested in the last 0.25 miles of the race. 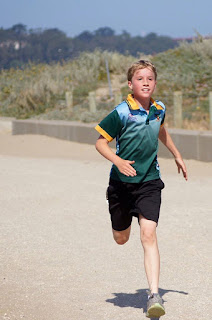 Mind you, this dude was a competitor.  As soon as E&C came up on him, ready to pass, he stopped to a walk for the first time in the whole race (we know, 'cause we'd been behind him) as if to signal, "you are only passing me because I am allowing you to do so."

I passed the kid on his walk break as well, but after a few seconds he sped back up and finished ahead of me, but after E&C.  All was well.


Meanwhile, G was pushing her stroller with her less than 1yo daughter taking a nap.  She opted into running the full 5K without stopping for her biggest workout effort in over 2 yrs.

So, in her shadow, I ran my highest grade-age effort in 2+ years.  I'm happy.

The day before the race, I ran my standard 0.5 mile jogging warm-up, 1 mile at the pace I think I can sustain for the race by effort, and 0.5+ mile cooldown.  I was surprised to find that the 5K effort mile was 9:25 in the hot sun (and the prediction for SF was relatively cool, although, damn, the direct sun on that final 0.75 miles can make 65F feel like 80...).

So, I decided I'd shoot for 9:30 - 9:40 (McMillan had predicted 9:45 as my current fitness pace).  Historically speaking, these high 9 minutes per mile paces are not race paces.  They are weak tempos to my former self.  This is what humility (and acceptance of aging and laziness and lack of fitness) looks like.  I was actually excited to realize I could race in the 9s for the first time in 2 years.  This is who I am right now.  And it was fun.

At the start, I told E and C that I was shooting for this pace range, and they, being younger dudes with no running watches or data collection/reporting devices, decided to try to stick with me as long as possible.  This was ambitious.  C had ran no more than 2ish miles in any one run total in this training cycle.  We'd run as a group 1 time per week, breaking off with me and G chilling with the stroller and the guys doing their own thing each time.  Apparently, at some point in the 2ish mile running lap every week, C would ask for a break to walk, briefly.  E was always supportive (and is generally fit enough to string together some low 9 miles), but they were sticking together and they'd never run more than 1 mile at 9:30ish pace without stopping for a walk break.

I executed on my plan.  Guess what, it hurt.  I finished averaging 9:38, which is slower than my fastest marathon pace, but correct for me in a 5K right now. I knew my own fitness and I assumed I would drop the men at some point on the path due to lack of C's training.  But, they surprised me and stayed with me, using me as a rabbit at times in the first few miles in the sunny spots where they were lagging, but then taking off with 0.6 miles to the end to run down the random 12ish-year-old kid (pictured above).  As I noted, to his credit, the kid stopped to walk just as they passed as if to say, "Yeah, I know it.  But, for real, you're only passing me because I'm letting you."

Long story short, C was way more fit than his training let on.  29:30 5K for C (never more than 2ish miles ever) and E (not really interested in speed).  Well done, boys.

Overall, it was a gorgeous day in Chrissy Field and a wonderful way to spend a Saturday morning (followed by brunch at one of my favorite restaurants, a crawfish boil at a friend's, and an early night at home on a 3 day weekend).

Weekly total mileage (after today's target 8 miles slow but actual 5.6 due to a blister and bad socks) is 29.77.  Big workouts this week include the Chrissy Field 5K at sub 30, plus an 11X400 speed workout, and of course today's "long run" plus lots of easy stuff including walking during the rest of the week.  I would have preferred to hit 8+ today on my long run, but the blister from the bad socks took precedence, so I bailed... c'est la vie.

All things considered, I'm oddly feeling reasonably prepared for next Sunday's half marathon in Alamada.  Wish me luck!

Great job racing within yourself and your current fitness! Good luck this weekend at SJR!