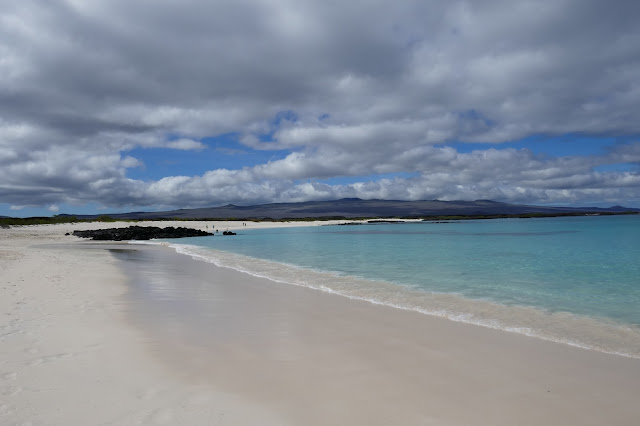 So, if you're taking a year off to travel, you are probably on a budget. The Galapagos Islands, while an awesome and amazing site to see, are *very* expensive.


At many points, I found myself feeling like the Galapagos reminded me of Hawaii -- except of course, they don't at all because in the Galapagos development and agricultural use of the land is extremely restricted, as is immigration and tourism.  This translates to a very high demand for access to the islands themselves as well as resources on them, and, unsurprisingly, a much higher cost.  This is also one of the main reasons why the Galapagos are so pristine.


After discussing it on the hike in Peru, we decided that we were going to bite the bullet and spend the money to get there on the flights (available only from Ecuador's mainland, and like most flights in South America, expensive by US standards) and the national park entrance fee ($100 per person) and the Transit Control Card (required, a unique identifier issued by the INGALA to track your stay in the Galapagos - $20 per person).  Mainly, we decided this because we weren't certain when we'd have the time/opportunity to ever go again.


What we hadn't decided was, what and how we were going to see the sites.  The Galapagos National Park requires that all visits to the park be accompanied by a licensed guide.  This means that even if you are trying to do-it-yourself, you aren't, really.  There are several different islands, with public inter-island transfer boats between the inhabited ones (whose towns and developed areas and associated sites you can visit without a guide).  If you want to visit any of the uninhabited islands, you have to go on a boat that is certified by the government to go there, and of course, you must go with a local guide.

We'd read that it was possible to get last-minute discounts on all-inclusive cruises (all of which follow one of the prescribed routes approved and regulated by the government).  If you wanted to get off of the boat and actually walk around on many of the islands, you needed to be on a small enough boat that it had secured permits (along with the requisite licensed guide, of course) for all of the passengers to actually walk around.

From the last few days of the Salkantay hike (about 1 week before departure), we emailed an Ecuadorian travel agency (Happy Gringo), and asked about any last minute deals that were available on cruises.  There were 4 or 5 options, at 30-60% off the advertised price, leaving in the 2-3 day period we asked about (early October, so shoulder season).  We opted into an 8 day cruise on the Millennium.  We were very certain it would be primarily retirees, and were pleasantly surprised to find it a mix of singles and couples from 20-40 as well as two different families traveling with older teenagers or their 20-something children/partners.  It sounded like almost everyone booked a last minute deal on this particular cruise -- everyone I discussed it with booked within the last month or so prior to the cruise.

The boat was clearly the height of luxury when it was built (just ask yourself, when was the last possible date when you'd build and name a brand new vessel "The Millenium?") but it had been maintained in a state of functional disrepair for quite some time.  This mix of ghetto and former glory was fine (and even amusing) for us, but I could see how some people might find it difficult to enjoy given how darn expensive the whole experience is.  For example, the on-board fresh water supply seemed to have a hint of rust to it -- we just showered and washed faces in it anyways, figuring it was better than the salt water we were washing off.  The filtered drinking water was obviously fine -- it tasted normal and we didn't get sick.  So, despite the negatives, I just kept reminding myself that we were here for the nature, and that it would have been much more expensive for a nicer boat with exactly the same experience in nature.

On the overnight passages, there were a couple of nights where the sea was rough enough to wake us up even while sleeping on our backs or stomachs (on those nights, sleeping on your side was impossible as you'd roll over with the rocking).  During the day, there were a few anchorages where the sea was a bit rough and some people did find it difficult to eat on those days.

The best part, of course, was the nature.  The first day included a trip to the El Chato Tortoise Reserve and the Los Gemelos -- twin gigantic volcanic sink holes.  We'd arrived the night before and stayed the night in Puerto Ayora because the day of the cruise there were no available flights that would get us to the airport in time.  With half a day to spare, we took a tour of the El Chato Reserve and Los Gemelos on the way to the airport to meet the guide -- if the itinerary had been more specific (it just said, "Santa Cruz Island") we would have opted for something else so as not to repeat the experience, but we love tortoises, so going twice wasn't a big deal.

The boat's itinerary was gloriously mellow.  A few activities a day, plus some bells ringing to let us know it was time to eat or get a briefing.  Other than that, nothing but relaxation (including showering next to a sliding glass full-size window that opened to the sea -- I will *never* forget showering by the clear water, rocking slightly, looking out at the islands, and being greeted by a sea turtle below my window who came up for air -- MAGICAL.)

Every day after the first day, after breakfast at some point we'd board the Zodiacs to be ferried to shore to do very short slow hikes on the various islands enjoying the landscape, views, lava lizards, marine iguanas, sea lions, and birds.  At some point we'd come back to the boat for lunch.  Every day after the first day involved at least one snorkeling expedition in addition to the hikes.  The boat's snorkeling equipment was in okay condition, but the wetsuits were almost threadbare.  If there is one thing I would have negotiated harder for, it would be to have the snorkeling and wetsuit included in the price we paid -- it just felt annoying to shell out cash on the boat for such dilapidated stuff.

But, oh, the snorkeling!  We swam with sea turtles, sea lions, schools of beautiful fish, groups of sharks, spotted eagle rays, sting rays (keeping a distance, of course), and through pods of non-stinging phosphorescent miniature jellyfish.  This trip convinced me to get certified for scuba diving -- that's how much I loved the snorkeling.  It was so peaceful and amazing to co-exist with all of these wonderful beings in the water.  I want to do it more, and more often.

The bird nerd on our cruise counted 40 species (not including sub-species) just before we departed and then he helped me count reptile species, which numbered 19.  Overall, it was an amazing experience and I feel so privileged to have been able to enjoy it.

WERE YOU CHECKING OUT BOOBIES?!?

Weird comment behavior. For a while @Lucky_girl's comments showed and @arvay's didn't (and the same for my replies). Now, Arvay's are back and @Lucky_girl's are gone...