And Then There Were None

In the interests of reminding my brain that we are headed to Paris and resurfacing French from beneath the instinctual romance language default to Spanish after this year's travels, I started trying to find a way to get in an hour or so of French each day.

Unfortunately, the French film scene and activities with the Alliance Francaise in Atlanta are all null while I'm here, and the Netflix and Amazon Prime streaming options are limited.  (Any and all recommendations for good non-expensive media streaming in French from the US are welcomed!)

My mother-in-law set me up with an afternoon French chat over drinks with one of her Quebecois (former French teacher) friends, and my sister-in-law has promised to do the same with one of her retired French teacher patients.  So I have had some opportunities for real-time conversation.  But really, I needed to do more.

So, I decided to read a novel in French.  I tried to download the Kindle version of L'elegance Du Herisson (the original French version of one of my favorite books:  The Elegance of the Hedgehog).  Unfortunately, Francophile demand for Kindle must not be very high, as even this critically acclaimed best seller is not available in French on the Kindle.  So my choices were ordering the paperback, or going with another option. 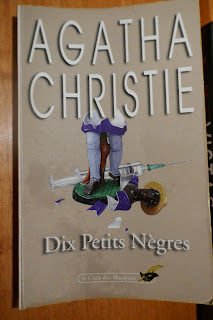 Conveniently, while searching for more French, we unpacked the closet of stuff we haven't used since the US/Canada road trip, and I found that BT of 9 months ago had packed a collection of language study resources for Europe, including a few novels written in French:

I'd read Le Petit Prince in French on several occasions back in the day, so I decided to pick one of the other 3 to start.  And, well, I picked the one that I figured was likely to be the least difficult for me, which is to say, the shortest and most modern.

I'd been a little obsessed with Agatha Christie's works as a teenager, and I remembered reading this one and enjoying it immensely, recalling the English title as "Ten Little Indians" and that the poem featured in the story had that refrain.

When I showed her the book, my mother in law asked me, "So, what is nègres in French?" and I guessed, "I suppose it must be some sort of outdated negative term for native peoples, like savages, but perhaps with reference to their darker skin?"

Ummm... No.  This murder mystery is one of the most published classics, but the language has been reworked several times, according to Wikipedia:

In the original UK novel all references to "Indians" or "Soldiers" were originally "Nigger", including the island's name, the pivotal rhyme found by the visitors, and the ten figurines. (In Chapter 7, Vera Claythorne becomes semi-hysterical at the mention by Miss Brent of "our black brothers", which is understandable only in the context of the original name.) The word "Nigger" was already racially offensive in the United States by the start of the 20th century, and therefore the book's first US edition and first serialization changed the title to And Then There Were None and removed all references to the word from the book, as did the 1945 motion picture.

The book and its adaptations have since been released under various new names since the original publication, including Ten Little Indians (1946 play, Broadway performance and 1964 paperback book), Ten Little Soldiers and – the most widely used today – And Then There Were None.

For the record, other than the ugly terminology, there was absolutely no hint of an acceptance of racism in the book, quite the contrary, actually.

I was surprised at how much I enjoyed reading this novel in French.  It's a great suspense story (especially if you've forgotten the final outcome) and lauded by many as *THE BEST MURDER MYSTERY NOVEL EVER WRITTEN*.  I've encountered several pop culture references to it since my first reading as a teenager, and there are additional obvious derivatives that may also play on some of Christie's inspiration for writing (See: Clue the movie and much more).

I hadn't tried to read an actual book in French in 20+ years, and I was pleased to realize that I could still do it (had to review the passé simple, but thankfully BT of 9 months ago also packed my Bescherelle).  While reading in a foreign language, it's tempting to look up every word you don't recognize, but for me, it's not feasible if I want to finish the book.  So, I plodded along, guessing at 80% of the unknown words from context and looking up the remainder on Google translate if they keep reappearing (how wonderful the modern world is, but how much *better* would it be if I could just click and see the definitions in French on the Kindle?)

And now, here I am with yet another unexpected benefit of the sabbatical year.  I'm quite proud of having read a novel in French, *and* I'm feeling the same sense of accomplishment as I often felt from book club when we tackled a book that was so much a part of the cultural references relevant to a particular genre (the closest analog to my mind is Dracula, one of our 2014 picks).

I'm thinking I'm going to put off Le Petit Prince until we are actually in France, as it will be easy to get through without taking time and effort away from our travel adventures.  In the meantime, I'm leaning towards a second French novel, so if you read this in the next couple of days and have opinions, please weigh in.  Otherwise, I'll be sure to report back.