Today, at mile 12 of my 18 mile long run, I ducked into a bathroom at a local park and was met by a bright red face. Possibly purple.

Also, I was slightly nauseous. And, (TMI warning) despite feeling like I needed to pee... nothing.

Did I mention I got a ridiculous sunburn at the airfield shooting off rockets yesterday? How about the fact that I've been consistently 5-20 miles short on my target training mileage each week for about 6 weeks? (I blame my inability to maintain a work-life balance for this one).

For today I was smart enough to pick a flatter course to extend the distance from last week's 14 to this week's 18, but I forgot that much of the San Francisco Bay Trail is wide open with no tree cover in the direct sun. And, I started an hour later in the day this time.

Despite the disadvantage of the hour delay in starting, I ran the initial 12 miles for the most part at an even pace without stopping to walk, which was a big improvement over last week.

But, when I saw the face in the mirror, I had to admit, I looked like someone who might be about to enter heat sickness territory. In fact, in a supreme example of hindsight being 20/20, while overheating in the direct sun and humdity of the Nagano Marathon, I realized that the 14-miler-from-hell was actually most likely me suffering from mild heat exhaustion. Thanks to the terrible experience on the 14-miler, I slowed down in Nagano, abandoned any commitment to pace, and finished slowly but surely with no ill effects other than a terrible sunburn: 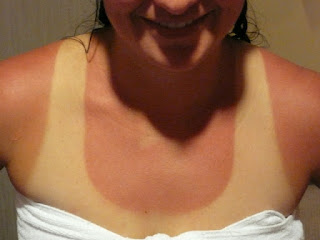 So, back to today at the park with the purple face. I was still sweating. I definitely could have found a way to complete the final 6 (and possibly even do so intelligently if I slowed down and ran-walked and picked a shady route home).

But my thirst response was overwhelming and yet my stomach was not pleased with anything going down.

My stomach is almost invincible. Despite severe sickness of traveling campanions, Mexico, China, and Cambodia have failed to conquer my stomach. When it decides to pack up and go home,  I've learned to listen (I'm looking at you Egypt, oh, and a few folly-filled workouts).

Thanks to the nausea, I did what I'm great at doing when it comes to running schedules. I decided to bail, and live with what I'd done as good enough.

I convinced a nice guy with a gorgeous yellow lab at the park to let me use his phone to call E, and E came to my rescue. Adorably, the guy loaded up his dog in his truck to leave, but when he saw I was still waiting for my ride, he waived from afar and hung around to wait to make sure that E arrived before he left. What a nice (and politely executed) gesture!

I arrived home 2.5 pounds lighter than when I left despite drinking at least 3 re-fills of my 16 oz sports drink holder in addition to stopping and gulping at multiple water fountains.

The short story is that I find myself in a hilariously common situation for me -- close to yet another marathon and short on long runs and undertrained due to my own lack of discipline and idiocy.

Part of me wants to say that my goals are flexible this time around, so I can relax because I know that if I go slow I'm in more than good enough shape to finish. But, my goals are almost the same as Arvay's (and I don't want to slow her and G down):

1) Do not die.
2) Do not injure myself.
3) Finish with G and Arvay.
4) Feel okay the next day. (I've never felt okay the day after a marathon.So, I'm impressed with her goal and hope it means I can be a slowing influence by pointing to it, often.)

I've blown off several long runs--one when it was too hot in Ann Arbor, one when my mom was visiting, and just last weekend when I wanted to go backpacking instead.

I will suffer (to a certain extent) for a loved one, for money, for my career, or for my education. I won't suffer for a hobby. Hobbies are for joy!