I Want To Go Everywhere

And, it would seem I have a huge bit of work to do, even if we limit it to Earth: 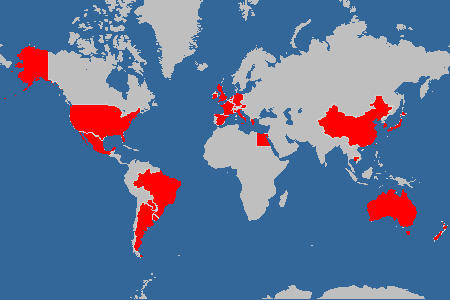 If the random Interweb-based image creator is to be believed, I've visited 31 states (13.7%) (Not sure why I'm getting no credit for Canada, although by area, I really haven't seen most of it outside of Vancouver)

In other news, I had a decent running week.  Nothing awesome unless of course you take into account that consistent decent running when you're pushing the beginning of your 4th decade is awesome, regardless of how slow...

In fact, last week I picked up a new client where there was someone who wanted to bond over running, but apparently he'd been in contention for the US olympic team in his youth... I felt horrid, because truly, I have nothing to add or relate to on that topic.  I could not really bond with him at his level if he wanted to chat pushing the line on running.  As he surmised from my blog, I run, or as he probably thinks of it, I jog.  But I'm honest - I'm a true recreational runner. I've never been an elite and I'm guessing that my aged, heavy, super-short body isn't going to magically become something that allows me to relate on the topic of elite running as an individual.  But, if you want to chat stats and talk about impressive performances of Americans on the track or road?  Oh, yeah, I've become a Nerds' nerd on these topics.  (In other news, did I mention how much I love that the World Cup coverage published running total distance numbers for each sub? Yes!).

So, the decent running week:  35.29 total miles.  Many walking.  Not much worth writing home about but a decent 12-miler today -- first 6 miles averaging low 10s, then the remainder, just to get it done for a final average/mile of 11:47.  Happy.  If a bit scared for what the marathon will turn out to be.

That map is really neat! Do you mind sharing where you found the app/website? I'm curious to do one for myself.