Remodel Update (What I've Been Doing In My Spare Time)

Back in December of last year, a pyrex dish full of beets exploded when I placed it in the sink at 400F and it came into contact with room temperature water.  This led to a vigorous FB discussion where I learned that Your Grandma's Pyrex (and mine) was way cooler than what we get today.   Unfortunately, the shards killed our garbage disposal as E and I argued about the best approach (run it 'til it stops or stop before it explodes...). 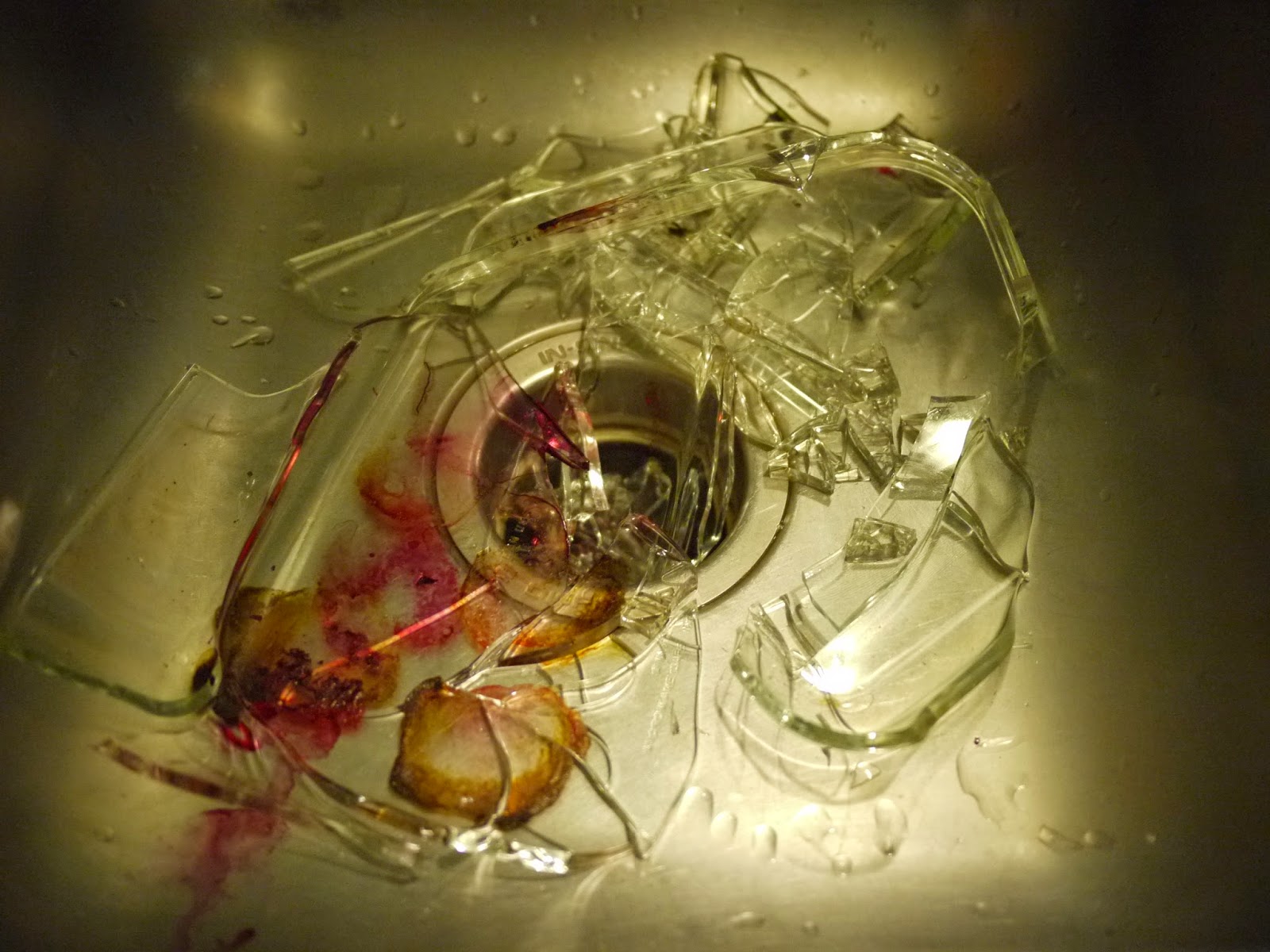 So, after 11 years in our home, rather than replace the garbage disposal, we finally decided to use the momentum to suck it up and remodel the kitchen.

We've had many exciting issues with our house over the last few years, including massive termite damage requiring a year-long bathroom remodel, a roof replacement (we went from tar and gravel to an industrial foam covered with reflective white vinyl and it decreased the average high summer temperature of our non-air-conditioned home 10-15 degrees F on hot days!), and, last by not least, last year's excavation and replacement of the 64 years of "creative" patio, deck, and exterior wall construction:

After 7 months of back and forth with multiple contractors, cabinet builders, designers, a structural engineer, and more, we're finally in the thick of the kitchen remodel.

Our house is split in two.  There is a plastic sheet separating us from the majority of the chaos.  It's somewhat effective for dust, but horrid for noise. 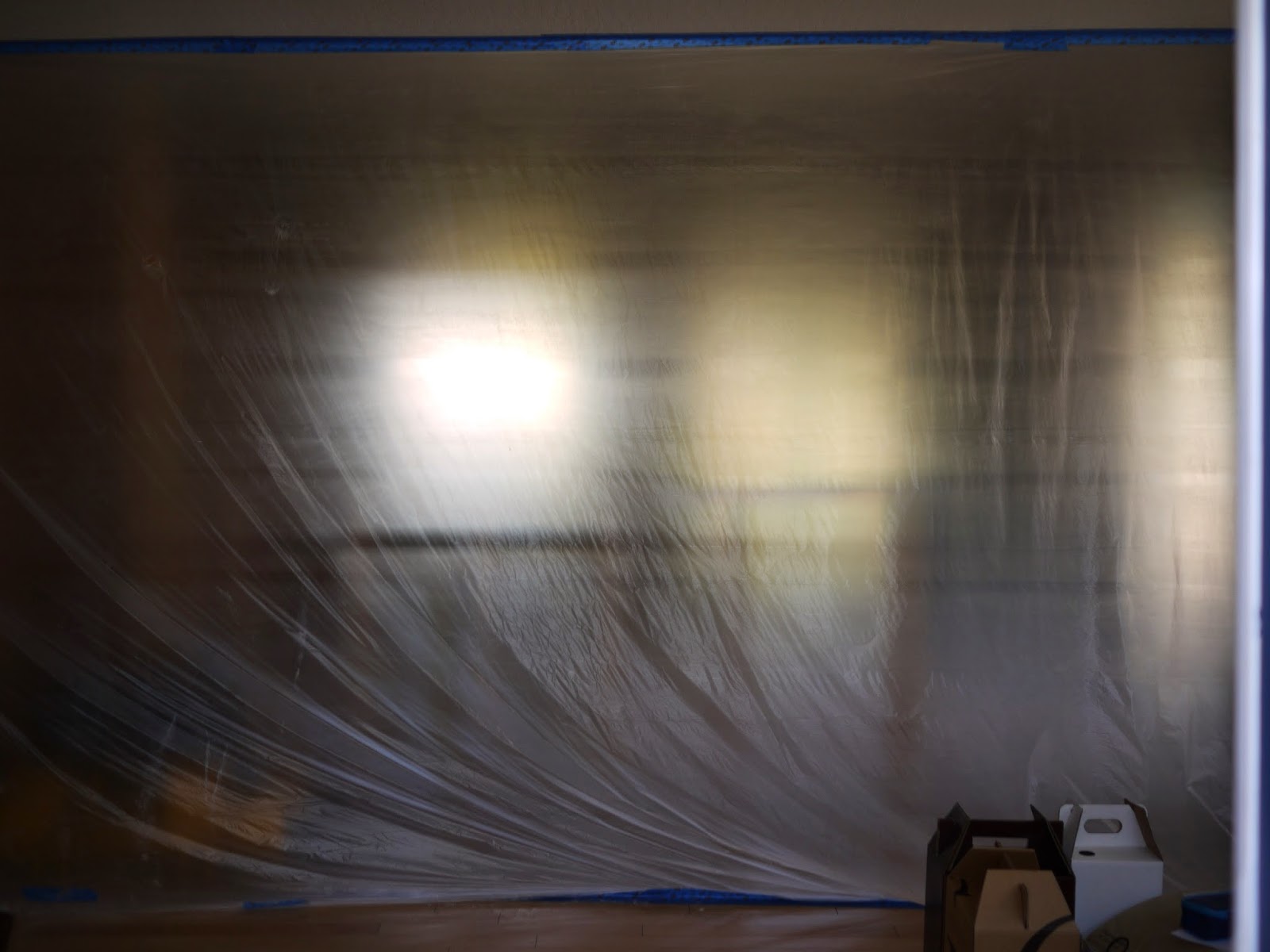 For the record, this is what our kitchen looked like after E2 and P came to help pack it up the night before demo started: 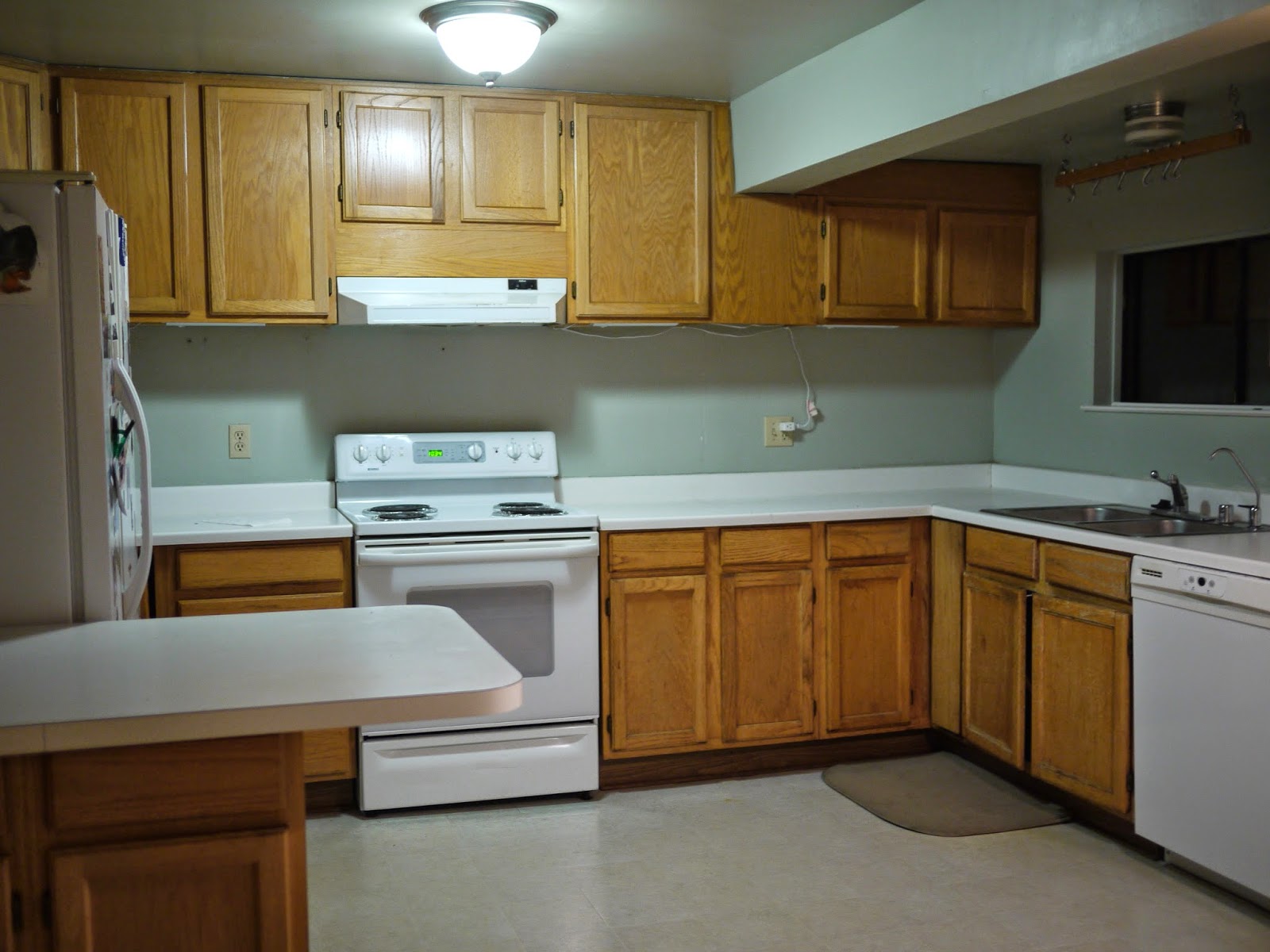 And, this is what our guest room looks like (also known as how much space your kitchen plus half the living room minus furniture takes when packed): 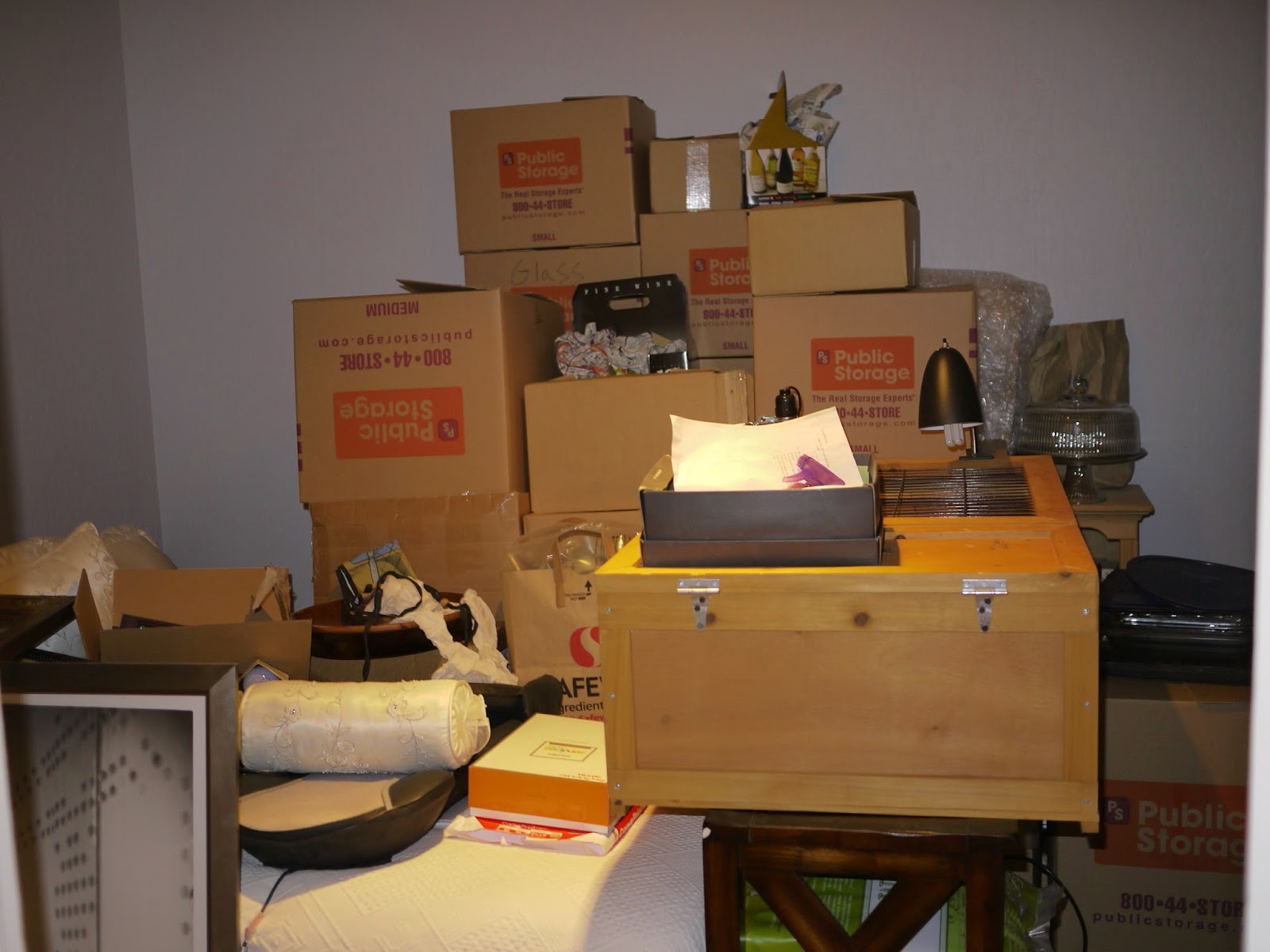 Every day, I wake to noise as the contractors get to work at 7 AM on the dot.  I don't blame them.  They commute to avoid the traffic and the weather.  But, man, does it throw a wrench (buh-dum-ching) in my daily routine.  Every AM, by the time I've had my coffee and I'm mid-way through my initial email clear-out, there is, inevitably, a call to me through the plastic, "BT!  We found something we need to talk to you about!"

I trudge over to their door and we talk.  This week I finally admitted to myself that even though I'm not *doing* the remodel in any real sense, the day-to-day decisions, conversations, check-ins, change orders, check writing, plan confirmation, etc. take at least 30 minutes every day and sometimes close to an hour, typically in the AM when I'm trying to get out the door, but sometimes unscheduled calls to my phone when I'm onsite with clients.

The bad remodel surprises are many so far.  Nothing is up to code.  In keeping with other parts of the house, it's a 64 year old house that was thrown up for cheap, and the previous do-it-yourself owner did most of his stuff impressively wrong. Big ticket discoveries so far?

** A gas leak requiring entirely new gas to be plumbed throughout the house.  Although, in fairness, this vindicated 10 years of me intermittently claiming I smelled gas and E gaslighting me.  Literally.  This one might be worth the monetary cost.

**Impressively unsafe and illegal electrical from the last remodel that requires the entire house to be re-wired.

**Supposedly unrelated but suspicious -- the electric dryer decided to die in solidarity to the its kitchen appliance brethren who were being decommissioned.  We are now using the local laundrymat until we can get the construction finished and figure out whether the dryer needs to be replaced or if we can repair it once the electrical ridiculousness calms down.

**Exposing the structural beam that used to dip into the kitchen and threaten to injure tall guests showed it to be something other than the beam we thought it was:


I finally hired a trusted friend to help with some of the clean-up details and that's been a huge help, but it's still a bit overwhelming when coupled with my normal life, if I'm honest.

In the end, this remodel will likely end up being approximately double the original estimated cost.  Thankfully, my brother and dad were both in construction, so I assumed the worst and came up with 2-2.5X as a potentially likely outcome.  I'm not thrilled that it's happening, but at least we were prepared.

But, there has been one very good discovery.  The old kitchen had an ugly dropped ceiling, that was much lower than normal due to the low roof, the "structural beam" extending the house, and pitch they used back in 1950: 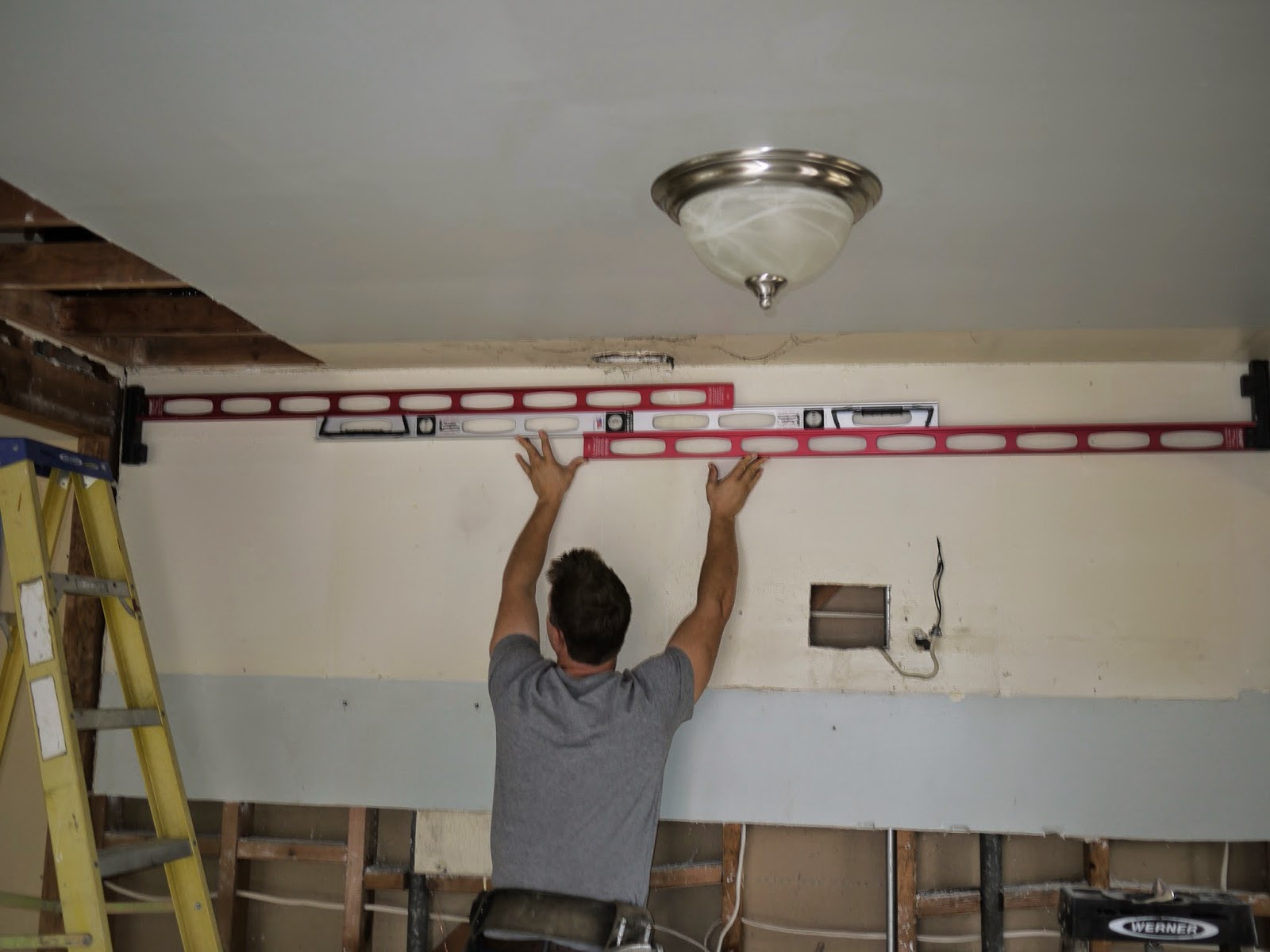 It, like almost every supposedly flat surface in our house was not level (and the walls it connected with are/were not plumb).  It lost almost an inch and half in 8 feet.  Fun.

When they removed a portion of the ceiling (to the left in the picture above), we saw that the original ceiling was stained wood that vaulted with the roofline.  It was in surprisingly great condition.  So, we made a decision for yet another deviation from the original plan, and now, when we are done, we will have gorgeous old wood as our new kitchen ceiling, which is pretty damn cool.

In the meantime, when we aren't traveling, we're living the Californian outdoor lifestyle with a psuedo kitchen out of our outside laundry area.


Oh, and our garage door motor also decided to die in solidarity to electrical appliance friends this week.  No big deal.   It's not like the kitchen cabinets are crammed into the garage and need to be extracted for installation in a week or so. (Kidding, actually, it is a very big deal and part of my daily discussion with the contractors tomorrow will be around what to do/how to deal with this mess -- no major deviation from the baseline level of budget fear I'm maintaining...)

We occasionally talk about buying the place we're currently renting if our landlord ever decides to sell it, & I have exactly this fear re: remodeling because *know* a bunch of things have been "fixed" by unqualified people & aren't up to code. But at least it looks like when it's all done, you have an awesome & gorgeous new kitchen!

@Angela: From our prior work, we knew to expect some special surprises, but apparently this place is uniquely messed up. The contractors say every job has its surprises, but ours has definitely had more than most. If there hasn't been major structure work, you're probably fine, the majority of the expensive mistakes were made when they extended the house to make the kitchen larger back in the day.

It's unfortunate that the explosion had to occur. It’s a good thing that nobody got hurt. Anyway, it looks like your house have tons of issues that need to be settled. While it would really take you a longer time to finish if you recheck everything, it's still better than encountering a problem later on when everything is done. So, how are things doing now? Any updates?

Looking at those structural issues, it must've taken you some time to fix all of them. And since it was already settled, I hope you could check those facilities from time to time. As you've said, it’s an old house, so I wouldn't be surprised if some other parts have problems as well. Good luck, and all the best!

I love it that you used glass doors and windows. It will make your kitchen look more spacious and well-lighted. I hope to see more pictures and read more updates about it soon. I'm sure it will look great! Good luck and take care! :)