Back in July of last year, one morning, I pulled the bathroom door open and caused an explosion.

Bonus, I was naked at the time (dis-gus-ting).

Did we call the termite inspectors immediately?  Uh, no.  I yelled to wake up E and claim that we had termites who had eaten everything except the paint on our bathroom door jamb, he woke, insisted it was *dry rot* and went back to bed.

Then, I took a shower, and we stayed busy and totally ignored it except to show off the party trick that E discovered where you could tap on the wall and cause the soldier termites to bang their heads against the wall to sound the alarm. (It sounds like Rice Krispies in milk.)

About 3 months later, once the dryness caused by the explosive intrusion to their massive mud-tube had killed the ability of the termites to perform the party trick, we finally got around to having the termite inspector come out.  The news was not good.  They recommended opening up the bathroom floor and doing all sorts of inspections plus pouring poison into holes they drilled in the slab. Immediately.

Yup, we ignored that too.

About 4 months after that, we finally got around to scheduling the demolition of the bathroom floor.  We admitted that we'd never take care of it unless the bathroom was literally destroyed.  So, we paid someone to do that for us.

I'm disappointed that we didn't at least enjoy doing the demo ourselves.  I feel like that could have been cathartic.

Eventually, we hired some contractors to come give us estimates and one of them confirmed that the owner prior to us had some questionable DIY skillz:

Normally, I don't take on things this ugly. It never turns out well in the end. There's always something else I discover that's been done with cut corners that's fucked up and needs to be fixed and the homeowners are never happy to learn of it.

Thankfully, one of the estimates was easier on the pocketbook (and came personally recommended). He was happy to take a week off to let the termite people do their poisonous thing. E reported that the termite treatment guy said, "Don't worry. I put a *ton* of poison down those holes." Ummm... Thanks?

The drawback?  The General Contractor we hired, while reasonably priced, has *tons* of other projects.  So, we're getting a deal, but we're definitely being treated accordingly.

Today, he was scheduled to stop by at 11:30 AM to pick up a large check, and he couldn't even be bothered to do that.  You can imagine how quickly things are progressing when there's actual work to be done.  Of course, we are so busy that we don't really follow-up or push the timeline either.

Despite the almost complete lack of momentum on our part, all that's left is the final door installation and some trim clean-up.

And, we love it.  It has a fan (a bathroom with a fan, imagine that!).  We picked out tile we like and fixtures and a bigger window and overall, it looks great, it's constructed to code (what a luxury!) and is a huge improvement over the poor excuse for a master bathroom our handy-previous-owner sold to us. 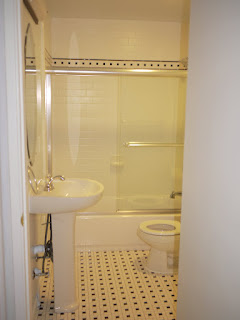 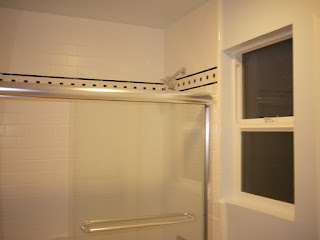 So, knock on replaced wood, it looks like we will be done with the teensy-tiny bathroom remodel just shy of the 1 year anniversary of the original destruction.

At this rate, we could complete the full house remodel in a little more than a decade!  Onward!
Posted by Biting Tongue at 21:00
Labels: home