Gifts from the Mountain Man

Brother came for a quick visit yesterday to pick up some of his tools that he'd left on his last visit. Unannounced 'til 12 hours prior. Unplanned. Appreciated.

He also dropped of 15 pounds of frozen venison. Meat from the wild that he killed, cleaned, and butchered himself: 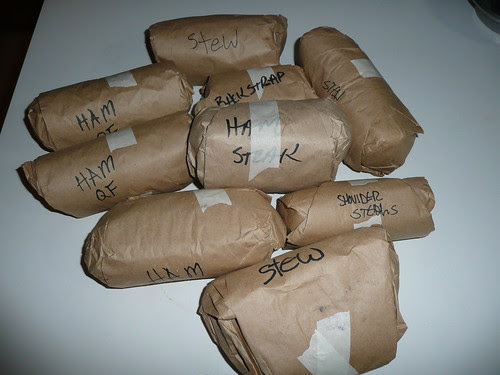 If you love to cook and have a garden (and are not vegetarian), then having hunting/fishing family members contribute meat to the mix is about the coolest thing ever!

Fresh, natural, environmentally friendly, delicious home-made food doesn't get much better than this.

This delivery was so exciting -- after weeks of misses, he closed out the season by getting not one, but two bucks in the final two weeks. This means he didn't have enough freezer space and we were to be the lucky recipients of some of the overflow.

Used to be, brother took his meat to the professional butcher. But this year, times are tough. So, he butchered the meat himself, with Dad's best friend, a former butcher.

This was the first time since 2004 that I'd received wild game in brown paper bags. Last time, it was Dead Elk Stew from Dad. This time, it was a variety of venison, from Brother, butchered in the same garage as the Dead Elk Stew.

He reminds me more of Dad each time I see him. He looks more like him. His hair is longer and curlier now, more like Dad's. Even his handwriting on the meat looks like Dad's on the long-ago-famed Elk.

Apparently, his next endeavor is to make homemade venison-pork sausage with some of the lower extremity deer muscles that were not proper cuts. He wants to use all of the animal and to experiment with spices, just like me. He identifies movie-stars by saying, "listen to his voice," just like I do. I see so many of my strongest personality traits when I look at him honestly -- my oddities that are strengths, and truly, most of my oddities that are faults as well, albeit expressed differently.

And yet. Seriously. Pretty much everyone agrees that we literally could not be more different. I'm not sure I agree. Regardless, siblings are fascinating (and frustrating) -- but, I could not be more thankful for or in love with mine (Sister too!).

Oh deer! Two bucks? You know what you'll have to have with that, right? Two-buck Chuck, of course!