The Angkor temples are the most impressive landmark I've ever seen. 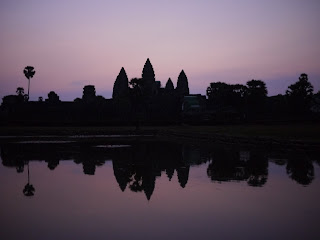 The pyramids of Giza were amazing, but I felt like I saw enough to be satisfied in one day. After 2 days of visiting Angkor, I felt as if I needed to come back at least one or two more days to get the full experience.

The first day, our guide took us through the entirety of Angkor Thom and a couple smaller temples he selected. 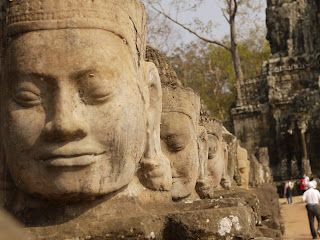 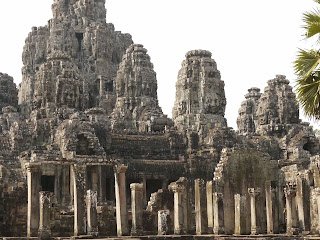 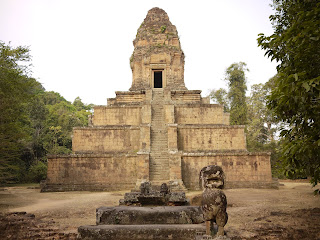 Holy crap Southeast Asia is HOT! I was so thankful I'd done my self-imposed Bikram challenge -- the 95F and 80% humidity was *much* more tolerable than it otherwise would have been.

That afternoon, I went for spa treatment #1 -- a traditional Khmer massage.

That evening, E2 and I agreed to take the next day off. My stomach had been mildly cramping all day and I really wanted to relax and recover, which, in typical American form (as I was reminded by an Aussie on my Seoul layover tour) I hadn't actually taken a day to do since my arrival.

Unfortunately, E2 came down with an intestinal bug that night. So, after it became clear that she was sick enough to need antibiotics, I made a trip into town to the fancy pharmacy and picked up so German Cipro for the low low price of $6.20. (This fact is worth its own entire post.)

E2 took her drugs and slept, and I went to the FCC and then walked around 'til I found a spa where I had an amazing 90 minute Thai massage (the best spa treatment of the trip) for $28.

K also was coming down with some sort of intestinal issue, so, overall, we were quite the team of travelers. We acknowledged this reality and canceled our Saturday tour of the Angkor temples.

Saturday AM, E2 was feeling much better, so we headed out to Wat Bo. 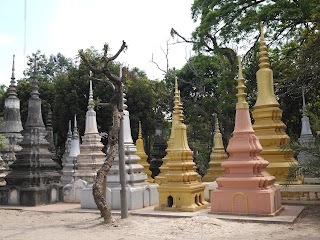 We also walked around the elementary school (zoom in for the helpful larger than life diagram of proper uniforms!). 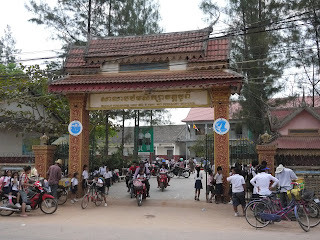 This part of the trip was probably my favorite cultural experience. Several monks stopped to chat with us as we walked through Wat Bo.

Much to our surprise, it was very clear that not many tourists made it to this part of Siem Reap. Everywhere we went in this area, school children in uniforms would yell to us, "Hullo!" "How are you?" "Wot is yur name?" They were so sincere and excited to interact with us, it was surprising. Their parents (if around) smiled with pride when we responded, obviously happy and proud that their children were able to speak English well enough to engage us. It was surprising given the masses of tourists on Pub street and markets less than 2 Km away -- but given what we saw and experienced, we could only conclude that very few tourists venture the extra mile from the tourism center to the actual functioning Buddhist monastery (we only saw 8 tourists during our visit to Wat Bo, *many* less than the monks and female construction workers).

To cap off the day with a proper indulgence, E2 and I walked through the heat 'til we found a local hotel that had just opened and enjoyed an indulgent reflexology treatment before calling for our tuk-tuk and dinner in our room.

Sunday, we woke at 4:40 to watch the sunrise at Angkor Wat. Later, we returned with a guide to get the full tour. Simply magnificent. 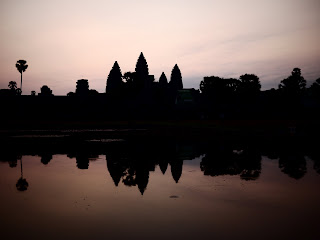 And then, much too quickly we were in a tuk-tuk ride to the airport and the trip was on its way to being over.
Posted by Biting Tongue at 01:35
Labels: balance, travel

I hope you're going to blow up and frame your sunrise photograph. Amazing!

A: what a great idea! Thanks.