Tonight marks the first night of Mandarin lessons where I was able to both tell and laugh at jokes. Egregiously silly jokes. Obviously basic jokes. And definitely nothing too complex given my ~70 word vocabulary.

But, even so, it felt great. I actually had some spontaneous un-scripted conversations, for the first time. Poorly (of course), but I did. Up until now, I really haven't been able to freely converse about anything, and it has been frustrating.

It's felt like it's taken longer to get to the functional conversation place in Mandarin than any other language I've ever studied. This is probably because with Japanese and Arabic I was purely CD/listening based for at least a year before my first conversation, so by then, I had many tools to draw from.

Even so, I'm shocked to learn that the tones aren't my biggest issue. The rigid sentence structure and grammar is much more difficult than I realized. Tones? I can handle the tones. And all this time, I put off Mandarin, as a *tonal* language thinking this would be the big problem. And here I am, floundering through grammar, which is usually my place of superiority. Comedy.

I can't even explain how lucky I feel to have friends who are willing to come to my house and speak Mandarin and go over my lessons and explain all the nuances (even if they weren't in my lesson). This week, all I had to do was cook pork chops over brussel sprouts (covered in a fancy dijon taragon mustard olive oil and rice vinegar sauce to be cooked down).

I feel so blessed and happy -- as if there's confirmation that I did something right with my life choices. Bonus, This is what my fridge looks like after tonight's lesson: 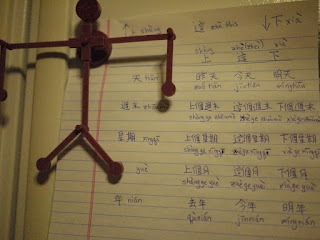 Apparently, in terms of conducting conversation, one of my biggest issues is time-related nouns: Last week. This weekend. Tomorrow. Next Year.

So next week, if all goes well. I'll be able to talk about last week, last weekend, next month and next year. Wish me luck!
Posted by Biting Tongue at 22:30
Labels: balance, language

Very impressed with all your languages. Good luck this week and next!!