A Tale of a Tram and Many Metros

One afternoon, E played hooky from the conference and we took the tram up Victoria Peak.  The line was quite long and they section the crowd into groups so that only a group of folks who will fit are allowed to advance at one time.  When it was our turn to board, a South American man shielded his girlfriend from behind, grabbed the railings and they got on.  Then, a group of Danish people boarded.  They were partially in front of me and partially behind me but they funneled their group to enter as one.  Behind them (and originally behind me and E) was a couple from Hong Kong (I assume).  I stepped forward to enter just as the man from Hong Kong did.

He tried to muscle me out of his way.

You can probably guess where this is going.

We basically wrestled our way through the door, entering the car at roughly the same time.  At the last minute I gave up when I realized I was actually stronger than this poor dude, and probably had an unfair weight advantage to boot.  I was struggling out of frustration at his rudeness and the fact that he thought I'd be an easy mark -- he sure as heck didn't try to cut in front of the Danes.  But, I realized he was probably struggling with his own manhood.  He said to me after we entered, "You're terrible."  I replied with the ever witty, "No. You're terrible.  I was in front of you and you're extremely rude."

The best part was that after this, the wife looked at E at the door and he graciously motioned with his hand and said, "After You."  She glared at her husband as she sat down.

Unfortunately, the weather wasn't great so the views weren't at their best.  But we still enjoyed it. 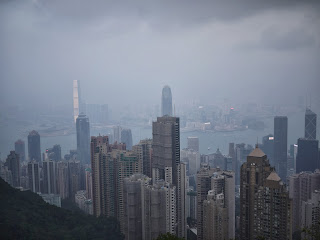 On the next peak over, there was a big house (?) with a bright red piano.  Very striking. 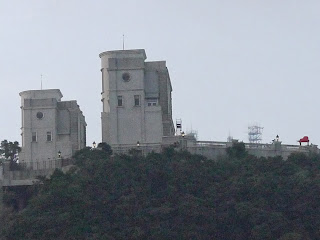 On Saturday after the conference, we took the daytrip E had been dreaming of (an early birthday celebration of sorts).  First, we took a taxi to Hung Hom station, where we ate a Chinese style breakfast from the cafeteria. 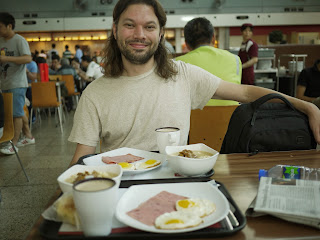 Then we took a metro to the Chinese border.  Then through Hong Kong exit immigration, Chinese immigration and customs, and onto another metro to get to the electronics markets district in Shenzhen. 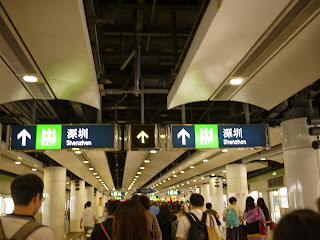 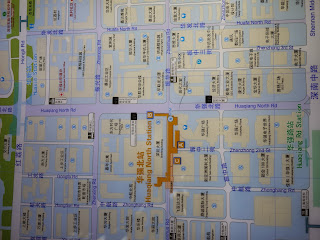 It was a chaotic mess of components, and E was in heaven.  The ground floor of the biggest market we went to was individual stalls for each component type, each stall run by a different family.  There were children running around everywhere in the middle of multi-story boxes and reels and whatnot. 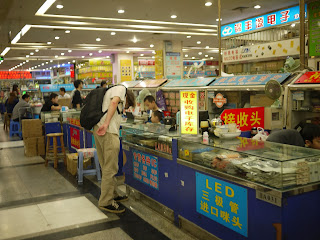 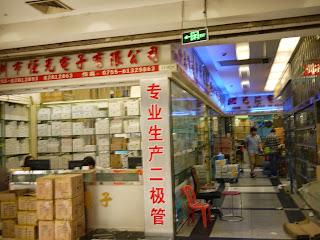 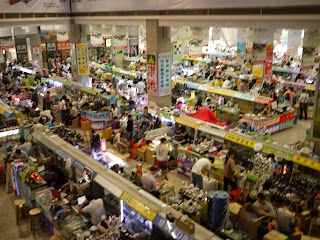 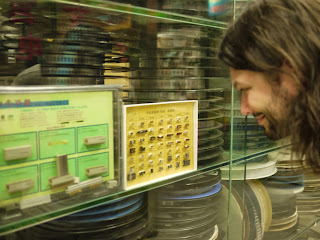 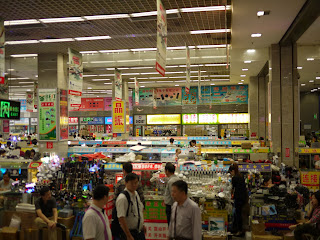 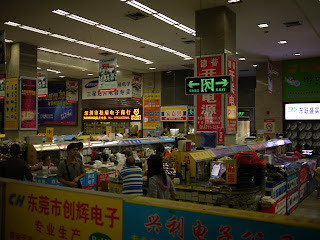 After a couple of hours of gawking, we did the multi-metro and immigration madness to get back into Hong Kong.  Then, we went to dinner at the restaurant on the highest floor in the world on the 119th floor of the Ritz Carlton Tower. 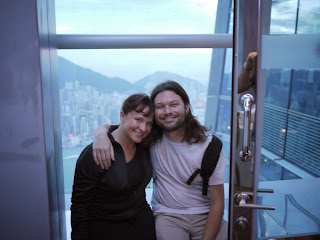 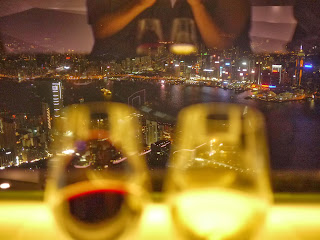 The food and wine was good, but the views were definitely the best part.

And the next day, it was time to go home.
Posted by Biting Tongue at 10:30
Labels: family, food, travel

I can NOT believe how ill mannered that man acted! Is that typical there? Sheesh. I'm glad you stood your ground.

The market looks really crowded. I'm not sure I would like that.

I'd heard stories of horrid (to us westerners) behavior from many of my American born Chinese friend. But, other than an obvious comfort that is much more than Americans' with openly farting, spitting and snot rockets, I didn't experience much worse pushing, crowding, or other public manners than I associate with Europe (where, I am constantly shocked to re-learn, the concept of a line/queue is impossible).

The most shocking thing, for me, was the open air baby poops (very strange, they just drop the kids' trowsers in the middle of a busy public street and they poop into a plastic bag or if it's already happened then they use a napkin to clean 'em off into the plastic bag). On the other hand, given how environmentally horrid diapers are, I guess this is actually a much more responsible approach to the issue, so perhaps I should try to get used to the idea.

Either way, in the Victoria Tram line (which, due to its location in Hong Kong, and its status as a major tourist destination was an international crowd, for sure), it was clear that everyone thought this guy (and possibly me too) was severely out of line.