Hong Kong Was a Trip: The Beginning 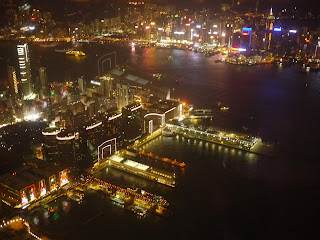 We arrived via plane and took the airport express train 5 minutes to the Asia World Expo, which was connected to the conference hotel.

The tiny part of Hong Kong known known as Asia World Expo is hermetically sealed from the rest of the city and sits on the same chunk of landfill that the airport is on, which has been annexed onto one of the outer islands known as Lantau. Poor E spent most of his week on this chunk of landfill as he was attending and presenting at a conference.

I fared slightly better. Most days I would wake up, go to the gym, shower, work for several hours, and then head out for some sightseeing.

The first day, I headed out with a goal of walking to the Bird Market.  My goal for the trip was at least a 5K a day.  I could do it walking, hiking, or running at the gym, but I wanted to hit the mark each day.  I did fairly well, and went much further on many days. However, this plan to walk from the Kowloon MTR station all the way to the Bird Market, was crazy, as I was later informed (and as I learned along the way). But, you never know you are a fool until you know, right?

So, here’s the thing about Hong Kong – all walkways end in malls. If you look up walking directions, they will likely be in some form of “Walk on the raised walkway to the ITR mall, then follow signs to the Grand Mall of Audaciousness, from there, go towards the mall that contains the next MTR station, exit on the east side and take the raised walkway towards Citic Center, exit on the ground floor and your destination will be on the right."

Oh, and there’s one other thing about Hong Kong – much of it is not designed to be walked at all. Many of the thoroughfares are only accessible to cars, motorcycles, and trucks.

And one other thing – there is construction everywhere. 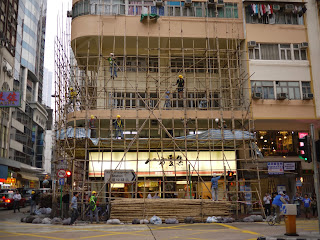 Small construction projects with bamboo scaffolding are on every city block.  But there are also giant huge squares of construction for skyscrapers (no doubt with malls) that are too big to comprehend the scale until you find yourself walking around them. 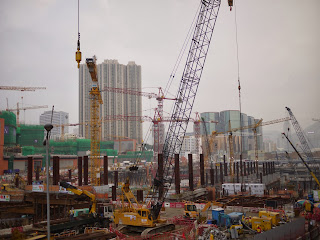 With all of these obstacles, the reality of my mapped walk was twice as long, and included awed gaping by me at massive construction projects as well as several unexpected lost hours in malls.

When I was on the street or raised sidewalks and able to walk outdoors on Kowloon, I sincerely enjoyed the scenery: 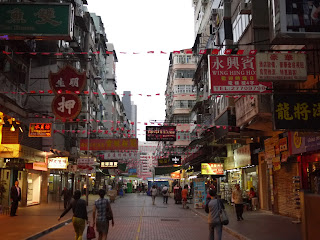 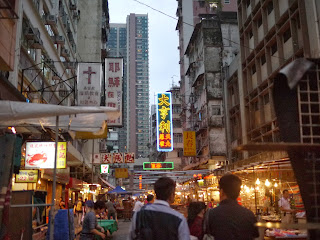 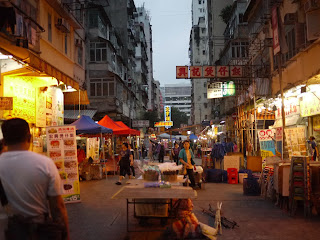 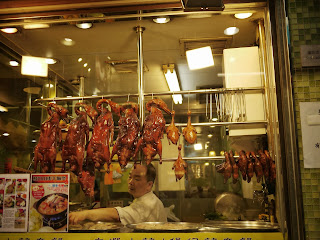 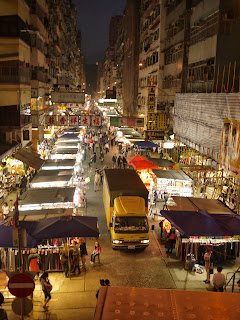 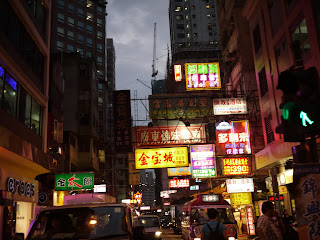 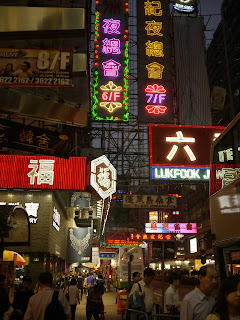 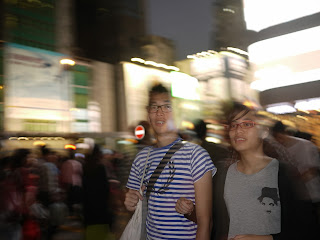 In hindsight, my plan was a great way to spend the day getting to know the city. But, it was a terrible way to get to the Bird Market, and when I finally arrived, I was very disappointed to find it closed -- just an empty alley with a forlorn bird mural. 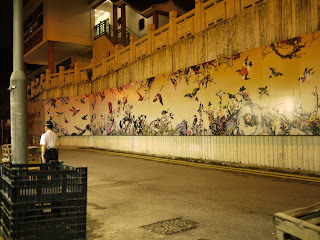 The Bird Garden was still open, but there weren't many people around and I wasn't feeling too safe going in there all alone in the dark, so I skipped it as well. 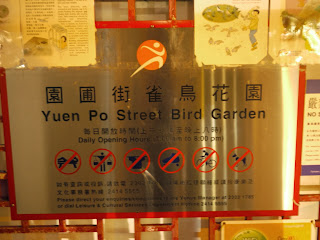 As I tried to shake off my frustration, I mistakenly paid for a MTR ticket at East Mong Kok station when I needed plain-old Mong Kok station.  The only way out was to put my ticket into the exit machine and eat the loss.  If you read the map below, my error will be clear (I was getting tired and hungry).

Finally, after a visit to yet another mall, I got on an MTR line that connected with another line that could get me to Kowloon station. E was at a party at the W hotel  (which, conveniently was attached to the mall for the station), so I figured I’d grab some dinner (in the mall, of course) and see if we could meet up for the train back to the Asia World Expo/hotel.

I picked the Chinese restaurant that looked the most interesting to me and enjoyed the best spicy beef noodle soup I’ve ever had. 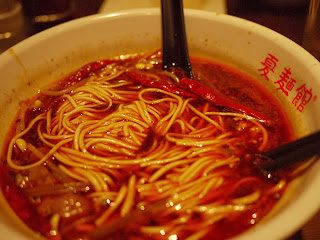 Seriously.  I will be dreaming of this soup for a long time.  It was absolutely perfectly tasty and hot with great beef and wonderfully dense chewy noodles.  When I was done, I was too exhausted to wait for E's party to get out, so I went back to the landfill of Asia World Expo alone on the train, legs tired, lips burning, and extremely content.
Posted by Biting Tongue at 20:03
Labels: food, travel

That noodle soup photo made my mouth water. And yes, as far as I know, Chinese people in Asia do not walk...unless it is to walk around a shopping mall. ;)

@FL -- comedy. The look of confusion from the concierge at our hotel when we asked how to walk to the tram to Victoria Peak was priceless. It confirmed my experiences -- they just don't expect you to walk long distances, apparently...

It's totally true what FL said. Especially in the city. In Taiwan, walking is usually only done in parks and nature preserves. As for the malls -- it's no coincidence that shopping is also called, "the walk around in the streets."

That noodle soup looks awesome! Have you had dim sum yet?