Working from home in your work-out clothes is a good way to convince the contractors that you have nothing better to do than to chat with them about the work whenever they feel like it.

Today, one sub rang the doorbell repeatedly and when finally I answered the door with my headset on mute, I said "I'm really sorry, but I'm working right now."   He appeared shocked.

Granted, I, a girl, rather, a childless stay-at-home woman, was still in what he probably thought were my pajamas (there are minute distinctions between my day-time pre-workout clothes and my pajamas, but he can be forgiven for not paying attention -- it's all stretchy and soft and comfy).  But really.  I actually do work.  Even if I don't look like it, and even if it doesn't require nearly as many muscles or actions as yours.

Anyways, where was I?

Oh yes.  In addition to the patio-madness for pavers trade, our original plan was to remove the stucco from the bottom of the house (demo is loud), add a weep screed, power wash the remaining paint and clean off the surface and add a new layer of stucco on top. 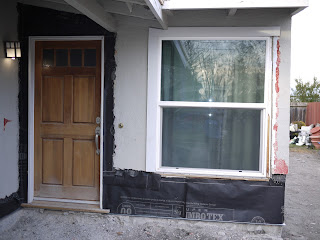 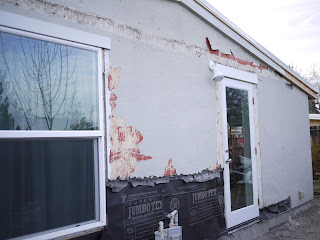 Note the gorgeous re-papered (with black) sections and the cuts to allow for the pristine new weep screed.  Note also the peeling paint from the stucco on the prior horrid "don't, don't, don't DIY kids!" job -- we had no fewer than 4 contractors express surprise and confusion at what was done here (before we bought) when we realized there was a problem and probably needed to fix it.

Turns out, the original stucco was cracked.  Probably a long time ago.  Imagine that.  No rebar in the slab on clay over a chopped down orchard laid down quick fast in 1950 for post-war vets.  Who could imagine any sort of swelling or contraction of the area where the footings were in contrast to dead wood roots that may cause issues for the house's structural integrity?

Painting over it with the wacky DIY solution solved it for enough time for us to buy and pretend it wasn't getting worse.  But, as you can see, at some point, we had to own up to reality.

So here we are.  The cracks are at every stud, vertically through the stucco.  Thankfully, the make-shift paint/texture job held reasonably well and we only discovered one major area of dry-rot due to the cracking.

Other house modifications we've since done have convinced us that the majority of the settling is done, but not all.  We have cracks that open and close with the seasons due to the swelling of the clay upon which our house sits and they aren't going anywhere unless we re-lay the footings.

Other fun details of this process are (i) the mounds of rocks and gravel and sand that change each day in our driveway as they await their final resting places below the pavers; and, more importantly (ii) the mounds of detritus that often sit for 1-2 weeks.  No one has called to get us cited for being a nuisance, and I consider this a major life accomplishment.  Because clearly, our house is an eyesore, at the moment.  All I can say to the neighbors is, "Don't worry, I know it looks terrible but when all is said and done, it will be matched and gorgeous." 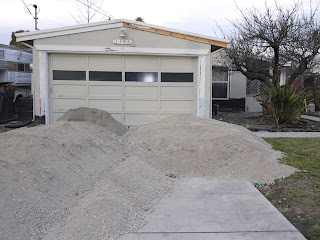 Just a month or so more of this madness to go...