Closing out AUS and NZ

Day 4 of the Queen Charlotte Track did not go according to plan.  E was limping -- the ice, aspirin, and aspercreme had not been sufficient to stop the knee pain.  Could he have hiked the full 20K on the slippery track after days and nights of rain in time to reach the boat cut off at 4 PM?  Probably.  Did it makes sense for him to do so?  No.

So, after 0.25 miles up the hill, we agreed to head back down to the resort and take the next boat service back to Picton.

We arrived at Picton in time to re-book ourselves for a night in Marlborough wine country!  Bonus! (Aside: Marlborough looks almost *exactly* like Edna Valley from the golden creased hills to the native plants, to the intermittent deep green trees and vegetation planted by the farmers and the interrupting red barns). After check-in, we expressed interest in wine-tasting, but we were informed that all of the wine tours for the day had already departed.  We called the shuttle manager for the service we'd used to get from the train station to our hotel, and he assured us we were "good as gold" to get in on his current driver's tour, so long as we didn't mind paying full price for only *4* wineries instead of *6*.

6 Wineries in an afternoon is standard?  Let's be clear.  In the event of alien invasion, we want the Kiwis as our ambassadors.  Yikes!

We had a wonderful abbreviated tour of my favorite any-day drinking wine region (there are other regions I prefer, but they are not affordable enough for me to be super-familiar with all of their offerings -- for no-guilt opening of bottles I know I will enjoy, Marlborough is the winner).

We had the shuttle drop us off in downtown Blenheim and we had a true pub food dinner.  A *MASSIVE* plate of fish and chips (with bonus fried calamari) for me while Nolan had the fillet (pronounced fill-it).

From there, we headed back to our hotel, slept, and then woke late, lazy.  We'd originally hoped that the bad weather would hold so our Picton flight would be re-routed to Blenheim like our flight in, but when I called at 10 AM, I was assured that this was not the case for this day.  So, I headed out for a quick short 2.15 mile run through wine country (we were pressed for time, but how could I resist?).  From there, we checked out, dropped our luggage at the front desk and headed to the cafe across the street for the most languid, decadent brunch feast ever. 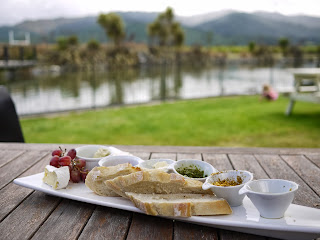 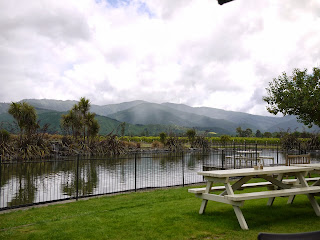 As we sat finishing our wine, a large man sat down and asked for us by name.  Turns out, he was the shuttle driver and since everything in this region is shuttles or private car, we were treated to some standard local culture.  He'd added some folks to his itinerary and if we could hurry it up that would be best for him.  He left us, went across the street, picked up our luggage (again with the complete lack of ID/veracity check) and came back for us and off we set so he would have time to include his additional charges.  As a result of his enthusiasm, we arrived at the super-quaint Picton airport almost an hour early. 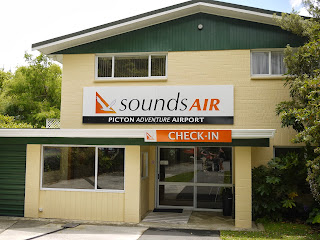 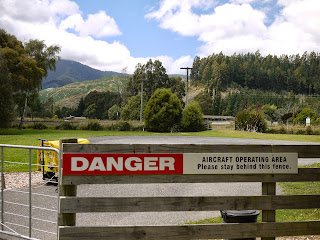 Thankfully, the waiting area was essentially a park, so we both read and enjoyed our books.  The weather was getting worse, so we quickly set off as soon as the plane arrived, turning around in this cul-de-sac before heading to the far end for take-off. 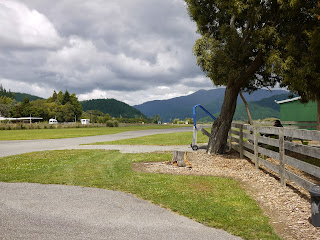 We made it.  The weather held and we got to Wellington without too much chaos.  Here's a shot of the South Island behind us as we head to the North Island from the plane: 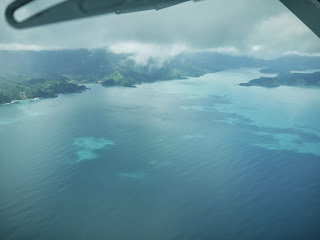 After that, it was nothing but New Year's and then home.

Sounds like you two made lemonade out of lemons (or wine out of grapes??). Thanks for sharing all of your photos and letting me live vicariously through you. :) Happy 2014!

@Jen -- thanks for the kind comments. Happy you enjoyed the posts vicariously (I love to travel vicariously and sincerely enjoyed your Taiwan posts).

Jen just put me on to your NZ posts and oh my word, it's beautiful there!! We've been talking about a NZ trip this Autumn and I feel more and more compelled to go! What a wonderful trip you had!!