When Did Time Speed Up?

How is it possible that 2014 is almost 1/12 done?  Every time I see them, my nieces and nephews confirm that they age at light speed - they are becoming adults, incrementally, before my very eyes.  Also, apparently, I've been running my own law firm for almost 4 years now.  WTF?

In other news, last week was gone in a quick blink, but typical.

I helped a client close a HUGE deal that will be announced this week.  It was fun, but also super stressful and like all big time-sucking-and-stress-inducing deals, I'm glad it's behind me (and that we were able to find an acceptable compromise -- I actually got a thank you email from opposing counsel regarding my responsiveness and reasonableness, which was a pleasant surprise).

The running was good on the scale of recent running.  32.49 miles total including approximately 7 miles of walking, the majority running at an easy pace, a great 8X400 workout at sub 8/mile for each interval, and, because I hadn't registered, I skipped the planned 10K on Sunday in lieu of an 11 miler broken into 3 w/u easy to the park, 5 easy with the local nascient running group (low 11 pace), and 3 c/d easy solo back home.  It was my first 11 mile run since the Zoom Point Pinole Half, so that's something to celebrate.  Also, I felt like I needed to get in one more double digit run before showing up at Kaiser SF next Sunday, so I'm pleased that it worked out.

I finally made it to the new local Yoga studio today.  I did the "Hour of Power" (you heard).

Yikes.  Apparently, my 2 years of Bikram didn't maintain as much core and arm strength as I'd thought.  Or, perhaps, the weight gain makes it harder for my arms and core to do their job.  No matter what the explanation, I was glad this class was only an hour and I'm fairly certain I'm going to be quite sore tomorrow.  At multiple points in the class, I was shaking.  As in, my muscles thought they couldn't hold the pose and my brain was forcing them to do so, but the body was fairly certain the brain was an idiot.  Mind you, this wasn't an advanced class.  If nothing else, I confirmed that it's probably a good thing that I'm deviating from a pure Bikram/recumbant bike/walking cross-training regimen to something a little more strength-demanding.

I sent my niece the boxed set of Harry Potter for her birthday and she agreed to re-read the first 2 and go through the whole set, *if* I read them with her.  How could I refuse?  Making a calendar appointment to go pick up book one from the library this week...

And finally, on Saturday, after a Friday night of reliving our youth with friends in the Mission (we had no reservations, walked aimlessly, stood in many lines and, once in one of the bars, did *shots* -- I haven't done a shot in at least 10 years!), and the next day's obligatory sleeping in and a short run by me, we walked to a lovely lunch of oysters etc. at Waterbar. 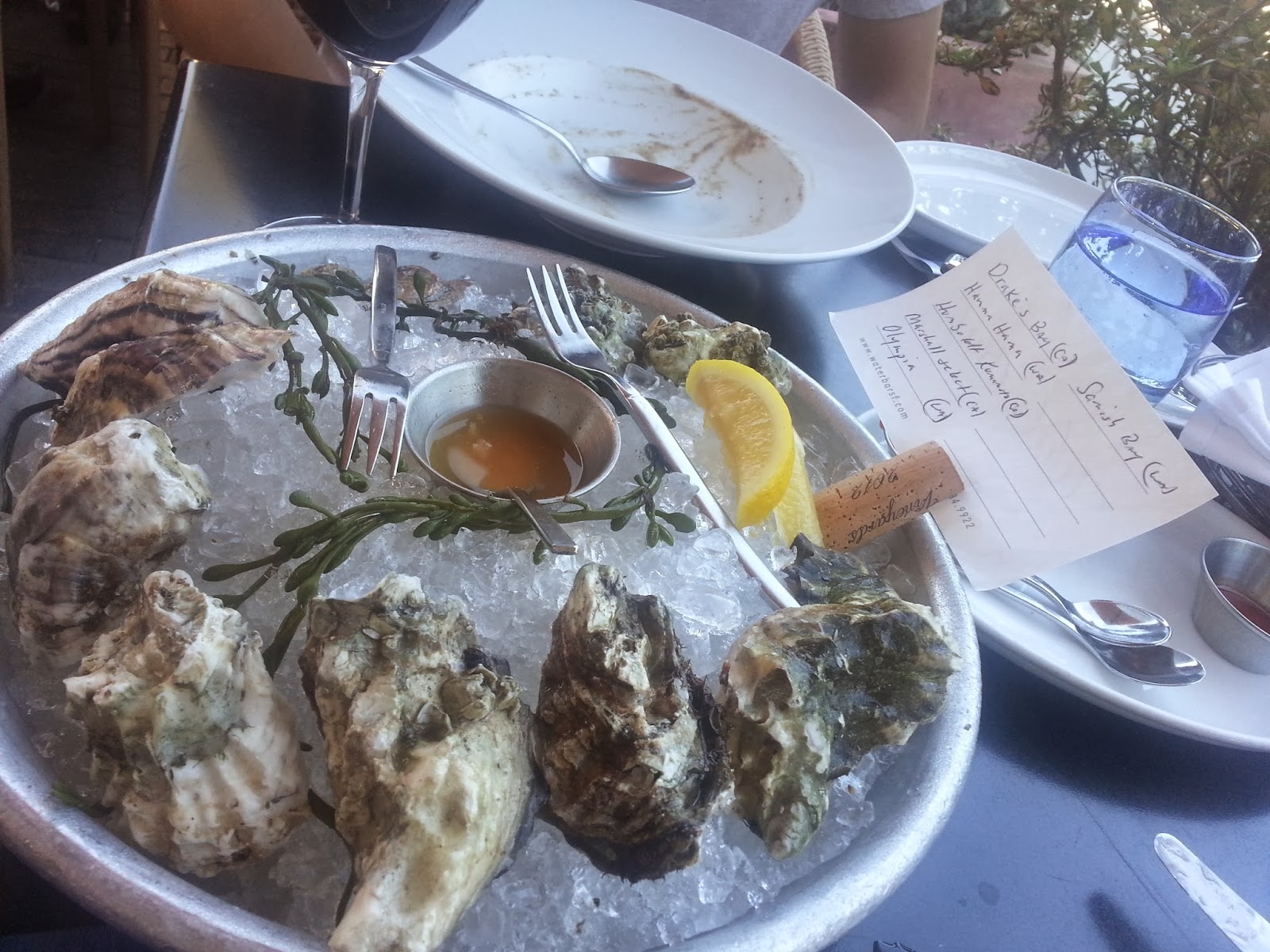 What we didn't know was that we'd sat for lunch in time to view the 10th Annual Walk For Life.

All in all, it was fairly anti-climactic.  No yelling.  No fetus photos.  Just thousands of folks exercising their 1st amendment rights, peaceably marching with signs, most of which were clear but not inflammatory, many of them carrying church banners from parts of California that most of the SF folks didn't recognize (Yolo, Butte, Sutter, Kern, Kings, Yuba, Modesto/Fresno [okay, those two are likely recognized]).  It was obvious that many of the folks were much more excited about being in San Francisco than they were about being in the walk, which made me proud that SF just let them come and do their thing and didn't really react to them at all.

Our (flamingly gay African American) server stopped by and asked, "Are you enjoying the show???"

E responded, in typical fashion, "I just want to troll so badly... 'Menstruation is Murder' or 'Gay Marriage Stops Abortion' but I just can't help but thinking that they are barking up the wrong tree, and so earnestly, it's kind of sad..."  Our server smiled, agreed that they were probably preaching to the wrong choir, and went about his day.  As did the rest of the city.

In light of the realities of conflicted political and religious views and the events they cause in the rest of the world, this display of peaceful speech made me more proud to be an American than just about anything I've ever experienced. 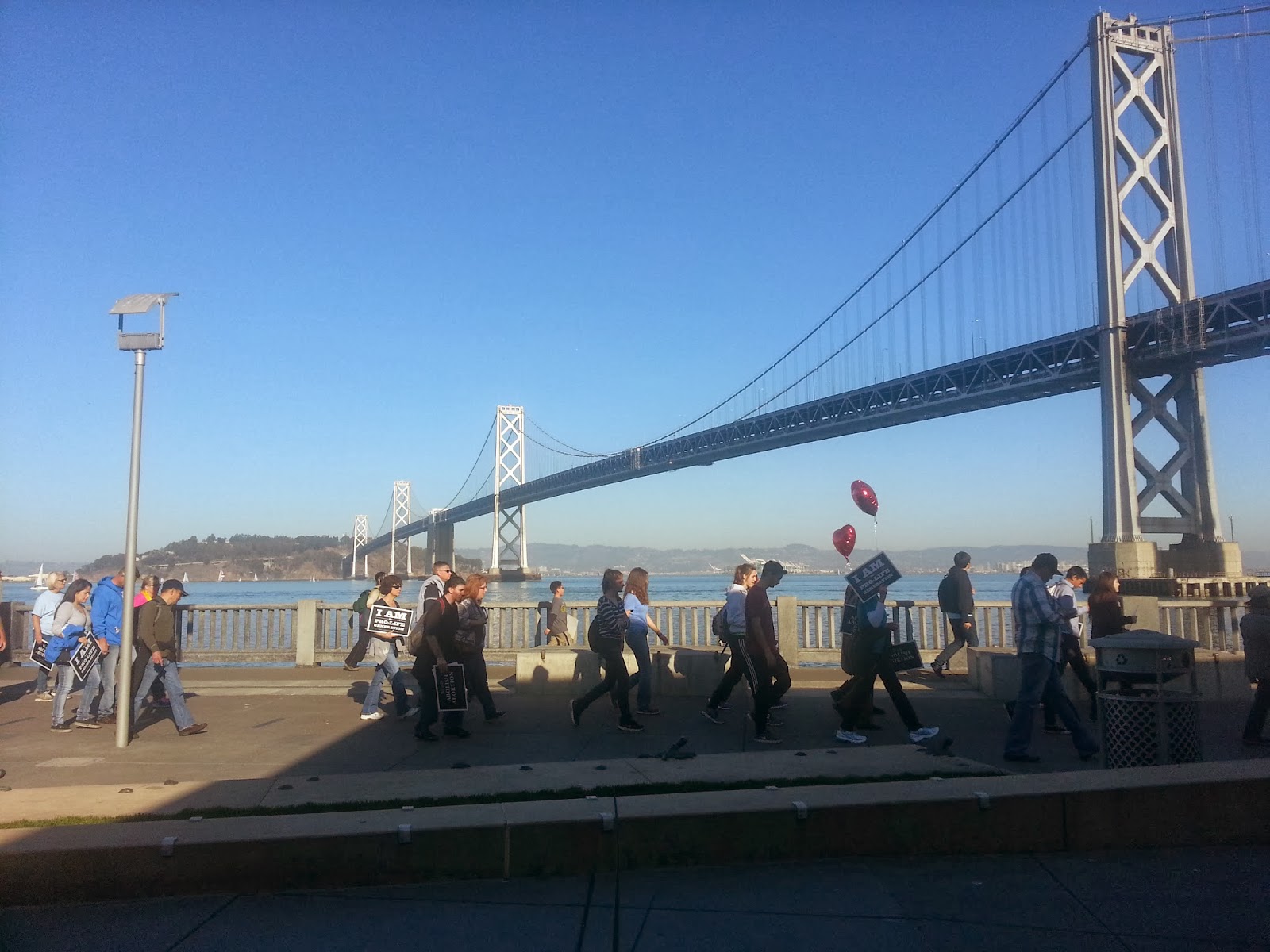 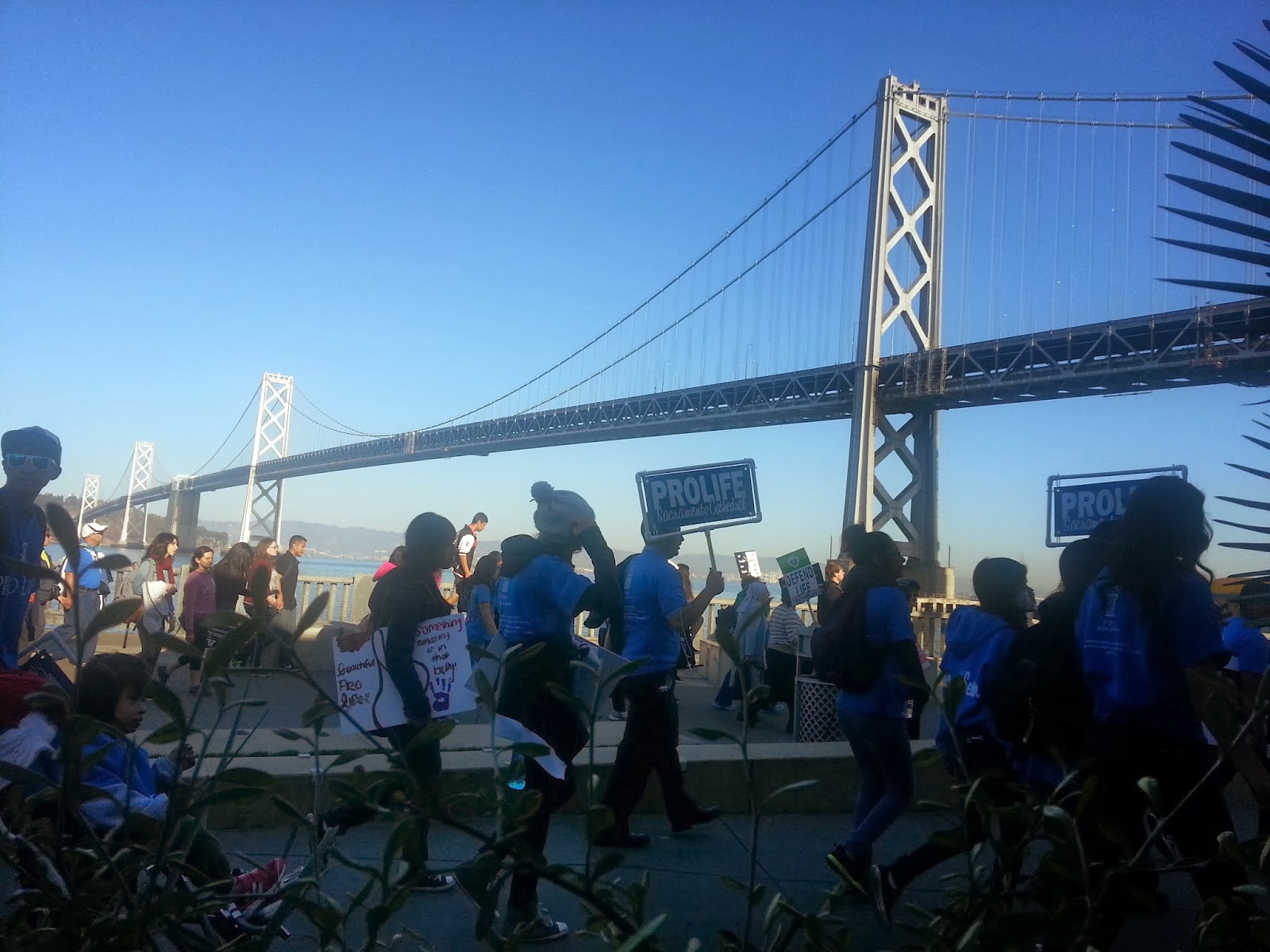 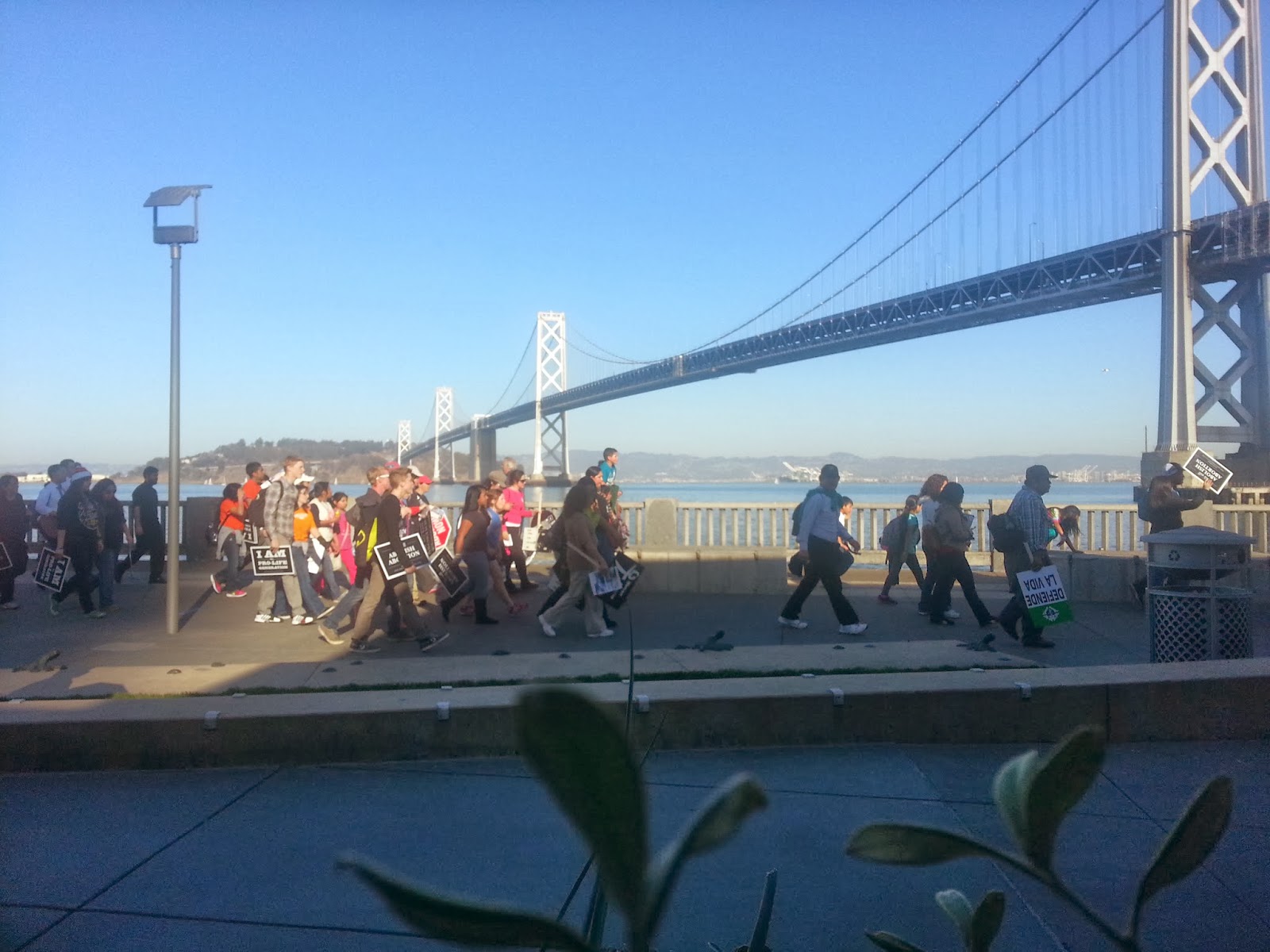 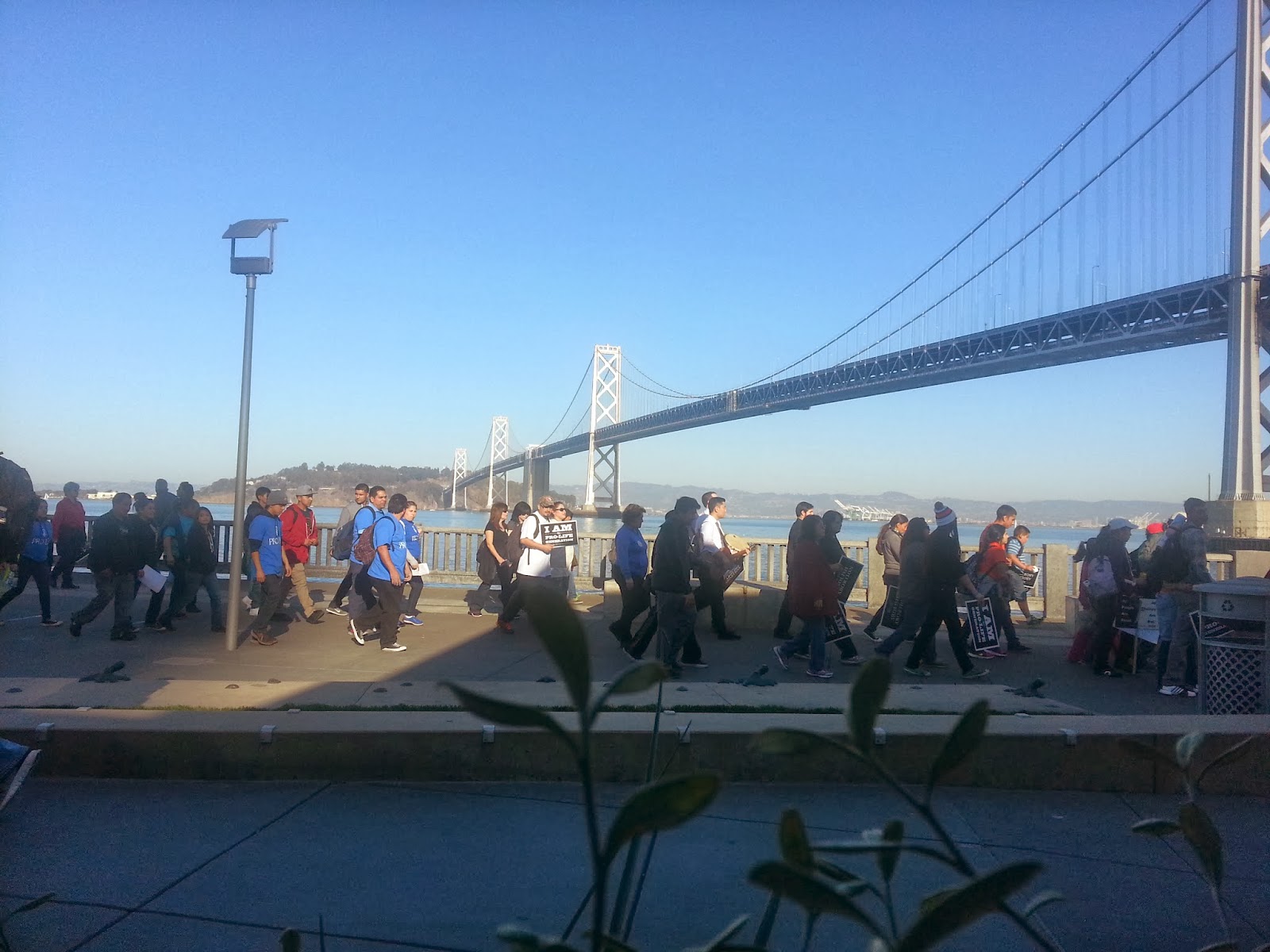 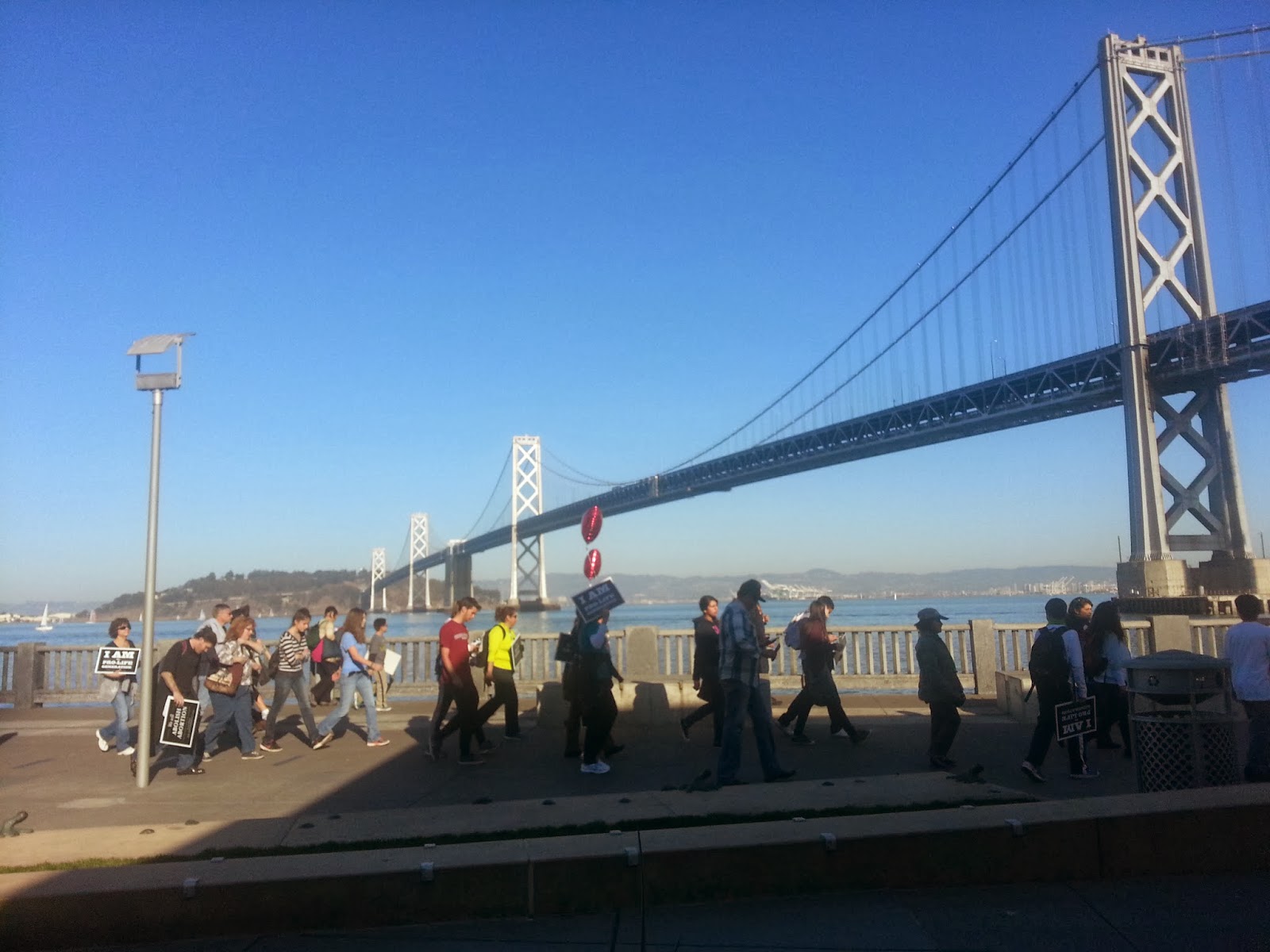 Peace. Love.  Free Speech. Democracy.  Equal Protection.  All *very* good things.  We can agree to disagree about the rest over a nice delicious lunch with a beautiful view.
Posted by Biting Tongue at 21:02
Labels: balance, books, family, running, yoga

Heh, I heard about the march from a bunch of friends. It seemed like people were much more annoyed by the inconvenience than they were by the actual subject matter. Glad to hear everyone was...y'know...more or less civil. Ish.