Day three was the longest of our itinerary: 25K to and from the water to the highest point of the track and along the ridgeline for a while before heading back down. 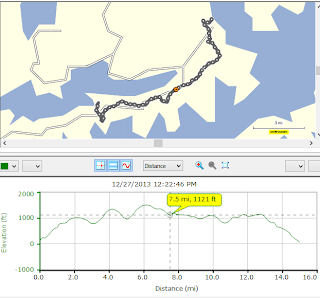 Also, it was pouring down rain all night and drizzling off and on when we headed out, so we knew it would be a difficult day.

Even with the weather, it was a beautiful and invigorating way to spend the day -- in some ways, I think it may have forced us to go even faster than we otherwise would have because if we slowed down we'd just get even wetter.


At one look-out point there were distance signs to major international cities.  It was interesting to see that my instincts about global distances aren't very good when you start throwing the southern hemisphere into it.

We turned the last major corner to see yet another beautiful view that we agreed would have been breathtakingly perfect under a clear sky but wasn't too bad in this weather either.

Finally, after a long descent that started to take a serious toll on pour E's knees, we made it to the crossroads for that evening's resort.  The weather started to clear and we were treated to great views.


After checking in, it was clear that E needed to ice both his recovering foot *and* his knees.  So, after getting him situated with the ice, I headed down to the bar to grab two beers and walk them back to the room.  I crossed the parking lot just as some of the workers from the hotel who helped check us in were loading a van and they called out to me, jokingly thanking me for bringing them beer at first, and then saying "tell your mate he's got a good one wit' you."  Thanks, Kiwis.  I was happy to deliver the message.

In keeping with the general theme, we ate dinner as soon as the restaurant opened and fell into a deep sleep early in the evening.  We were fully in vacation mode at this point -- we hadn't had a wi-fi signal or any cell service in 3 days.  It was wonderful.
Posted by Biting Tongue at 19:52
Labels: balance, family, running, travel