I attended an event today that was targeted to successful women in the area of my legal practice. Many interesting stories were told. Many of them belonged to women from generations prior to mine. You know, when they *really* had to fight -- when women were actually seen as inferior, as opposed to just "more dedicated to their families" or "lazy".

Me, I'm left with the left-over fights of "not-as-committed" which are more complicated and nowhere near as loaded as the "not capable" fights. I know my technical colleagues know I can understand the stuff (they don't doubt I'm good enough, they just wonder whether I have the dedication to deliver...), they all went to school with girls like me, studied with girls like me, and respect girls like me.

Me, if I want to pick any of the remaining fights... I'm confronted with the stupid non-meritocratic battles.

Like the fact that most of America felt okay attacking a young woman in the middle of an apparent breakdown who thought she was ready to be a professional performer because they thought she was *FAT*: 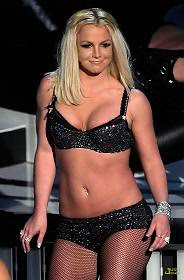 Let's be honest here. Girl looks good. Healthy. Muscular. Not skinny (as in nothing but skin). Not like she's got an eating disorder. Not strung-out on drugs. Reasonably alive. Better than most of us, if we are honest with ourselves.

Sure, she could be a little more perfectly hollywood-camera-toned. But, do we really need to have this conversation? Are we going to let people jump in without submitting photos of themselves in similar attire?

Also, in full disclosure, I uploaded this image to flickr after taking it (shamelessly) from Above the Law, so if that was wrong, please let me know. I will, of course, comply with all take-down requests, etc.

Anyways, I couldn't help but leave today's event with an appreciation for the battles I feel compelled to pick on behalf of my gender versus those that one of the first female judges on the federal bench in my area had to pick.

The times, even if you aren't paying attention, they are a-changing.

It's a good thing.
Posted by Biting Tongue at 21:21
Labels: balance, lawyering

The progress may be regional, though. Someone I know in Texas told me I'd have trouble finding a man to marry because I'm too independent.

I agree...progress is definitely regional. As you know, DJC and I have lived together for close to 5 years. My relatives in Pennsylvania recently made it VERY clear to me that, as a woman, I should not be living with a man to whom I am not married, stating that its "sinful".

Apparently, I'm going to hell. So what else is new?

Fair point on both counts. Sometimes I forget just how metropolitan-California-centric my view is.

Which is a good thing, because, you know, the orientals are very smart.

There is frankly a ton of rules that society places on each of us. i happen to agree with what the feminists are trying to do in general. but i encourage you all to examine how you judge others too. don't preach to me about my breast implants, that sort of thing. there is no one right direction that society should be evolving towards. live and let live.

If your breast implants make you happy, I'm all for them.